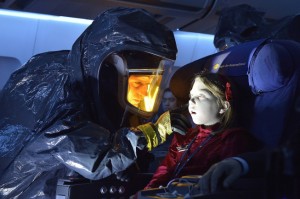 In FX’s new series THE STRAIN, Sunday nights at 10 PM, New York City is falling to a plague of bestial, fast-moving vampires under the control of a single Master. The series is based on the trilogy of novels by Guillermo del Toro and Chuck Hogan, both of whom serve as executive producers on the show, with del Toro directing several episodes and Hogan writing some scripts. THE STRAIN has already been renewed for a second season.

Among the few standing against the onslaught of monstrous change is Center for Disease Control epidemiologist Dr. Ephraim Goodweather, played by Corey Stoll. At the start of THE STRAIN, Eph is engaged in a custody battle with his ex-wife Kelly (Natalie Brown) for their young son Zach (Ben Hyland); Eph soon finds he’s got even bigger and harder fights ahead.

Stoll, who grew up on New York’s Upper West Side, has had a steady career on stage and in films and television, but he began getting significant international recognition when he played Ernest Hemingway in Woody Allen’s 2011 comedy/fantasy MIDNIGHT IN PARIS. He subsequently starred in LAW & ORDER: LOS ANGELES and earned a Golden Globe Supporting Actor nomination for his portrayal of Rep. Peter Russo in the first season of HOUSE OF CARDS. Other recent gigs include roles in the films SALT, THE BOURNE LEGACY, NON-STOP, the HBO film THE NORMAL HEART and the upcoming feature THIS IS WHERE I LEAVE YOU.

At a party thrown by Fox and FX for their actors, creative teams and the Television Critics Association, Stoll talks about fighting the supernaturally infected victims of THE STRAIN.

COREY STOLL: Yeah. I mean, my character is somebody who, up until you meet him, has been excellent at everything he’s done. He’s surpassed expectations his entire life and expectations have really been very high and that’s the world he expects to continue living in. And almost immediately in the pilot, from the therapy session to the plane landing, that winning streak ends and the general arc of the character is from knowledge to wisdom, but there’s a lot of failure in between.

AX: Eph is also very motivated by being a parent. How is playing a father?

STOLL: It’s really interesting. I’m not a father, but it’s the whole of acting is an exercise in imagination, and so it’s not hard to envision what it would be like to have my heart walking around outside of my body, and the fact that Ben Hyland is playing my son in both of these series – he was my son in HOUSE OF CARDS and I suggested him for this – he makes it really easy. He’s really a natural. I think he’s a really extraordinary young man.

AX: Has anything in THE STRAIN grossed you out at all?

STOLL: So much. The models and the prosthetics and the makeup that the special effects crews make are the best in the business. They’re so lifelike and incredible that they make it easy.

AX: How is working with Guillermo del Toro?

STOLL: An absolute joy. He’s so inspiring in his energy and intelligence and sense of play. He’s great.

AX: Are you a genre fan overall?

STOLL: I’m a fan if it’s well done, a story that’s told with integrity and intelligence and a sense of play. I’m a fan of a lot of horror things that are told that way, but I’m not a junkie of everyday horror.

AX: You’ve gone back and forth a lot between features and television –

AX: A lot of it very physically active – like THE STRAIN, for example.

AX: Do you come from a sports or athletics background?

STOLL: No, not really. I went to the High School of the Performing Arts in New York, and we didn’t have a gym, we had dance [laughs].

AX: Has that come in handy for the running and jumping and the other kinds of things you’re called on to do here?

STOLL: Sure, yeah. I definitely like to do all this stuff.

AX: Was acting your first choice of career?

STOLL: This is my only choice. I’m incapable of anything else.

AX: Do you have any other projects going on that you’re allowed to talk about?

STOLL: Well, I just got back from South Africa – I shot an episode of HOMELAND with a great crew of people, and it was incredible to work in South Africa. And I’m about to go to Boston and do a little thing in this movie, BLACK MASS, the Whitey Bulger story with Johnny Depp, and then I’m doing ANT-MAN [playing Darren Cross/Yellowjacket].

AX: How would you describe your career trajectory so far?

STOLL: I love working, and I love the fact that people keep inviting me to the dance and getting to work with great people, with varied characters, is such an incredible privilege. I try not to think about it too much – I try to focus on whatever script is in front of me at the moment.