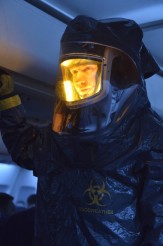 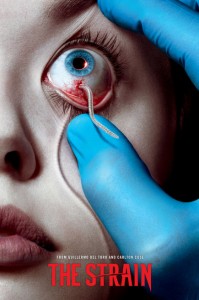 If you’re going to do a scary vampire series, do THE STRAIN. Director Guillermo del Toro and novelist Chuck Hogan, who collaborated on the trilogy of books on which this TV adaptation is based, have crafted a television version that is superbly creepy in both premise and execution.

Del Toro helmed the opening episode “Night Zero,” which sees an international passenger jet land on the runway with crew and passengers inexplicably dead, excepting four survivors. Enter the Center for Disease Control, represented in the field by Dr. Ephraim Goodweather (Corey Stoll), a man as expert at his job as he is unable to manage his personal life. His wife Kelly (Natalie Brown has had it with Eph’s workaholic ways and is fighting for sole custody of their young son Zach (Ben Hyland). Additionally, Eph is trying to remain clean and sober. His CDC boss disagrees with almost every decision Eph makes in trying to investigate what’s happened on the airplane, and the survivors want to sue.

Meanwhile, elderly pawnbroker Abraham Setrakian (David Bradley) has an encounter with the Elizalde brothers, Gus (Miguel Gomez), who is newly out of prison, and Felix (Pedro Michael Arce), an addict who is being supported by Gus and their mom. Setrakian manages to stop the brothers from robbing him.

There’s also the matter of a large, coffin-like crate that is aboard the plane. Its contents are pretty alarming, especially in motion.

The vampires of THE STRAIN are not the conventional sort in terms of simply having enlarged canines. Instead, they have scorpion-like stingers in their throats – use of insect designs is one of del Toro’s hallmarks – that are appropriately unsettling, as well as deadly. There is also another method of transmission that may be even more unnerving, as it’s real-world plausible.

Performances here are topnotch, with Stoll utterly dynamic as Eph, a man who thinks he knows what he wants but sabotages himself with anger and instinct at every step. As for Bradley’s Setrakian, when the Elizalde brothers try to hold him up, all we can do is pity the fools who would try to hold up somebody played by the actor who also portrays Red Wedding host Walder Frey over on GAME OF THRONES. Setrakian is considerably more likable and honorable than Frey (well, practically anybody would be), but Bradley gives him that same steel spine.

THE STRAIN is off to a great start, bringing vampires squarely back into the purview of the horror genre.