Exclusive Interview: Ian Anthony Dale on MURDER IN THE FIRST 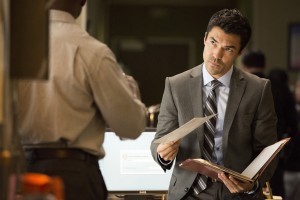 In TNT’s MURDER IN THE FIRST, Mondays at 10 PM, the San Francisco police homicide squad works on a number of cases, but always circles back to the investigation of the murder of a young woman who worked for a super-wealthy entrepreneur (Tom Felton).

Ian Anthony Dale plays Detective Jim Koto. This is hardly Dale’s first go-round as law enforcement – he and fellow MURDER IN THE FIRST actor Taye Diggs previously played police partners in the series DAY BREAK. The Minnesota native also starred in the science-fiction series THE EVENT, has a recurring role on HAWAII FIVE-0 and appeared in several episodes of CRIMINAL MINDS (again as a police detective), as well as the feature films THE HANGOVER and THE BUCKET LIST. Additionally, Dale stars in the popular Web series MORTAL KOMBAT: LEGACY as Hanzo Hasashi, aka Scorpion.

At a press event held by TNT for the Television Critics Association, Dale takes some time to discuss returning to the precinct.

ASSIGNMENT X: How is it reuniting with Taye Diggs after doing DAY BREAK together in 2006?

IAN ANTHONY DALE: It’s great. DAY BREAK for me was one of those shows that I’ll always be fond of, primarily because we had such a good cast and we had so much fun on set, and to get a chance to work with Taye again – I’m really excited because we always have fun, we clown around. It’s a great set to be on. I hope this one lasts a little longer than DAY BREAK did. But I’m fortunate to have the opportunity to work together.

AX: Do you like playing police detectives? Is this something you have an affinity for, or is this just what keeps coming your way?

DALE: You know, my character on HAWAII FIVE-0 is very much not a police detective. He’s a former head of the Yakuza and trying to clean his act up and trying to maintain a relationship with somebody in the police force. But I gravitate towards interesting roles, towards characters who are dealing with complex things and Koto is one of those characters. One of the things that drew me to this role was when [series co-creator] Eric Lodal shared with me that my character is the type of guy who wakes up every morning, looks at himself in the mirror and says, “I’m going to be the Mayor of San Francisco one day.” So he’s extremely ambitious and he’ll have to pick and choose who he cuddles up with in order to get his agenda passed through.

DALE: Calculated opportunist, but with always the right intentions. To be honest, we’re still fleshing this character out.

AX: Is there anything you’ve learned about being a police detective for this job that you didn’t know on the last job?

DALE: Well, I benefit from having a brother who is a homicide detective in Minneapolis. And so any time I have questions about protocol or authenticity, he’s the first person I call. So it’s nice to have him in my pocket all the time to make sure I’m doing my job correctly and authentically.

DALE: I don’t know. It depends on who you ask. I mean, I really don’t know. I’d like to do a little more research actually in San Francisco and do some ride-alongs, and speak to some of the detectives there.

AX: Although some of MURDER IN THE FIRST shoots in Los Angeles, there is some location shooting done up in San Francisco. Have you gotten to go up there?

DALE: I was fortunate to be able to film in San Francisco for the pilot. Only a few of us got a chance to go and I was one of them. I love San Francisco. I look forward to being there as much as I can.

DALE: Any time you get to travel for your job, particularly to really great cities like San Francisco, it’s just a bonus, so I wish we shot there more than just two weeks out of the season, but I’ll take it.

AX: Had you worked for MURDER IN THE FIRST co-creator/executive producer Steven Bochco before?

DALE: No, I had not, and I’m so excited to. In fact, last pilot season, when my manager and I made our list of pilots we were going to chase after, this one was at the top, and Steven had everything to do with that.

AX: Did you know at the time Taye Diggs was involved?

DALE: No. Once Taye became involved I got really excited because the chance to work with him again was within reach.

AX: Are you going back to HAWAII FIVE-0, or are you written out of that while you’re on this?

DALE: I don’t think we’ve seen the last of my character on HAWAII FIVE-0. You can see a nice bow tied onto my arc. I could still come back. I don’t have a bullet in my head.

AX: You also took a little break and went on a solo trip to Europe …

DALE: I did. About two years ago, I realized I needed a little more color in my life, and so I decided to go to Madrid, Barcelona, Amsterdam, and just get lost and see what life through my way.

DALE: Season 2 of MORTAL KOMBAT: LEGACY, we launched that [in late 2013]. MORTAL KOMBAT: LEGACY Season 1 had somewhere around seventy million views and is considered one of the most watched YouTube Web series of all time, so we had high expectations for Season 2. I think as a whole it’s been really successful and it’s been fun to be a part of.

AX: Do you think you’ll do Season 3 of MORTAL KOMBAT: LEGACY?

AX: Is there anything else we should know about MURDER IN THE FIRST?

DALE: It’s exciting to be working with Steven Bochco.