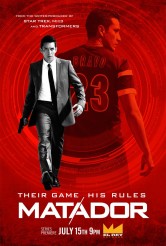 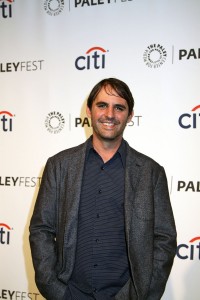 MATADOR, the second new scripted series (the first was FROM DUSK TILL DAWN, which had its first season earlier this year) on Robert Rodriguez’s El Rey network, premieres Tuesday, July 13. Despite its title, the action/adventure/spy series, created by Jay Beattie, Dan Dworkin, Andrew Orci & Roberto Orci, has nothing to do with bullfighting. Instead, “Matador” is the nickname given to new L.A. Riot soccer player Tony Bravo (Gabriel Luna) due to a particular action he takes during his tryout for the team. Nobody except his handlers know that Tony is really a D.E.A. agent who’s been recruited by the CIA to spy on team owner Andres Galan (Alfred Molina), who is an international criminal.

Roberto Orci, who also serves as one of MATADOR’s executive producers as well as a creator (other co-creator/executive producer credits include SLEEPY HOLLOW, the current HAWAII FIVE-0, the recent STAR TREK films, et al), and El Rey vice-chairman Scott Sassa sit down to discuss both the show – already renewed for a second season before the first has aired – and the El Rey network itself during an event held for the Television Critics Association.

AX: Is the El Rey network a new experience for either of you?

AX: It’s not that you’re new to launching networks, but even though it is affiliated with Univision, El Rey seems on the face of it to be a somewhat unique situation.

SASSA: It seems more independent to you in a way?

AX: Did Univision essentially say to Robert Rodriguez, “Go make a new network however you want to do it,” or how did this work?

SASSA: Basically. Univision was a great partner, because you want a partner that has the same self-interests. Univision has an eighty-five percent market share in those Spanish-[language]-dominant households. Let’s say – I don’t know exactly what it is – eighty percent [of Hispanic households] are Spanish[-speaking] and twenty percent are English[-speaking]. By 2025, they’ll be thirty percent [English-speaking] households; we don’t believe that eighty percent’s going to grow because of the immigration laws and things like that. So you’re going to have a gigantic group of English-dominant Hispanics that are – “not served” is an overstatement, but under-served, and so [Univision] needed to expand the market beyond that. Robert was a good answer. So that was a really good partnership. With regard to any creative issues, they let us do whatever we want to do for the most part. They’ve been super-engaged on the business side, mostly in distribution and cable sales, and so that’s why we are going to launch well ahead of any other from-scratch network. We [with MATADOR, FROM DUSK TILL DAWN and El Rey’s other original programming] are in English.

ROBERTO ORCI: For me, it’s the first time being part of something like this and launching something and helping to get it off the ground, and that’s part of the fun. I’m just learning a lot. It’s also terrifying for me – [to Sassa] you’ve obviously flown this plane before, so you’re not as scared, but for me, it’s a thrill ride. To be included in conversations that sometimes creatives aren’t always included in and to do what I can to act like an entrepreneur [laughs].

AX: Is working where, as I understand it, you’re essentially just answering to Robert Rodriguez, different from working in the traditional television structure?

SASSA: [It is similar to] Ted Turner [at TNT], or for Newscorp with Rupert Murdoch or Ron Perelman, you know where the ball is. You’re not at a company where you’re going, “Do I talk to him? Who’s making the decisions?” You know there’s one person. Business is not curing cancer. There’s no dramatic right and wrong; nobody dies on the operating table. So it’s really about making decisions and making them quickly, versus when companies die, it’s [often from] the paralysis. And we actually saw at El Rey, and we had this conversation – we went from having a handful of us to about thirty of us, and I said, “Stop being polite. I may not be in the position, because you guys need to just make [decisions].” I think people are much happier and better employees if they get a chance to make mistakes.

ORCI: Right. What I loved about the mandate, what attracted me to this group, is that it was, “Follow your instincts, and that’s what we want. Not try and please us or censor yourself.” Scott, in one of our phone calls, was like, “Whenever you think you’re going to go to the middle and take a step towards being conservative or not following your gut, you better go the other way.” You never get that from your partners at a network like that, so the lunatics run the asylum.

AX: Speaking of partners, just to be clear, is MATADOR a show with you and your usual producing/writing partner Alex Kurtzman, or you by yourself?

ORCI: No, it’s K/O [K/O Paper Products, Kurtzman and Orci’s joint production company]. He and I – I introduce him as my first wife [laughs]. We’ve been together twenty-three years. Sometimes he takes the lead on something, sometimes I take the lead, but everything is in cooperation with each other. It’s our company.

AX: How long have you wanted to do MATADOR?

ORCI: Actually, four or five, maybe six years. I remember a while ago, when I read about Moe Berg, where I got the idea – Moe Berg, a baseball player in World War II, was a contract agent for the CIA. And he would travel around the world, he would do stuff. And I had this log line, and I would pitch it around sort of jokingly, but no one ever said, “Yeah, good.” Here I show up and they’re like, “Let’s do it!”

AX: Did El Rey then say, “Instead of baseball, let’s make it football?”

ORCI: No, I always pitched it as a soccer player. I don’t know enough about baseball to have done that.

SASSA: Talk a little bit about your New Mexico experience and how you got to soccer.

ORCI: I wasn’t exactly a soccer fan all my life, and then I’m in New Mexico shooting a movie and one of the actors invites me over to see a soccer game with a few of his pals. And we’re watching this game where he’s rooting for his team and he’s explaining it to me, and he’s giving me a context for what soccer is and how, when you’re watching, you don’t know the talent involved in what’s going on there. Once you know, you get hooked. I think that’s when I had the idea, actually, during the shooting of that movie a few years ago. Just knowing more about it makes you appreciate it, and I think that’s what’s going to happen on this picture.

AX: Can you talk about who the main characters are as people?

ORCI: Well, obviously, we have Tony Bravo, who is Matador – he’ll get that nickname, because of how he plays. His family will be characters, which is not typical in an intelligence or a spy show. This is a guy who will take his mother to dinner. Obviously, there are other team members. There’s the owner of the team and his family, there is his coach, there is his handler, who is teaching him how to be an agent in the field, sort of like a CIA coach, while his coach-coach is teaching him how to play. And because we get a degree of freedom that I’m not used to feeling, when a character works, we can have him stay and discover people, see who people [in the audience] like.

AX: Obviously, the CIA people know Tony is a soccer player – do any of the soccer people know that he’s a CIA agent?

ORCI: No, the CIA compels him to try out for a team and get that as a cover. Nobody else knows, not even his family.

AX: Is there going to be CIA action and soccer action in every episode, or is the soccer playing just going to show up occasionally?

AX: And is there anything you’re getting to do that you wouldn’t get to do at a more traditional network with this show?

ORCI: I’ve never done a cable show [before], so you have to censor yourself less. Again, I’m not blaming anyone that I’ve worked with before; it’s in my own mind. I have impressions of what a network show is, and I’m having to re-examine those things, so what I get to do is a) learn why, but b) I get to follow my gut maybe in a way that I don’t always permit myself to do.

SASSA: Talk about not having a pilot.

ORCI: I couldn’t believe it when they pushed us. They said, “If we like this idea and you go with it, it’s thirteen automatically [without having to make a pilot first]. You get a season.” When you do regular development, you have a pilot, you shoot it, you’re not even planning ahead for the rest of the season, because you just want to make the pilot. Here, you’re planning a holistic, entire story arc, and you’re planning an entire season of television from the beginning, and you get this amazing continuity, this amazing momentum, this amazing energy, and it changes your storytelling a little. It makes it more organic, frankly.

AX: Quick SLEEPY HOLLOW question – are you happy with the long break between the end of Season 1 and Season 2? Do you worry about momentum?

ORCI: We have a lot of ideas now that there’s social media – there’s online content, there’s other things that we can do. Yes, we are concerned about it and we’re addressing it by actually keeping it alive in various fun ways that I hope people will like.

AX: Do either of you know if the second season of MATADOR will shoot about the same time of year Season 1 shot and will run about the same time next year, or are you going to try to accelerate production so there isn’t that much gap between seasons?

SASSA: We were pretty accelerated getting into this season. I think we need to take a beat. We’d like to produce this as quickly as possible – that’s a little more complicated with these guys, because they have so many other obligations, so we’ll have to figure out what makes the most sense for everybody, but we’d like to be more of what I’ll call the cable model, where you almost deliver all episodes before you put it on the air.

ORCI: How do you make God laugh? You make a plan.

SASSA: Univision is not involved in any of the creative decisions. It’s Robert.

ORCI: Yeah [laughs]. I don’t see any reason why we can’t do that, because like I said, the lunatics are running the asylum.