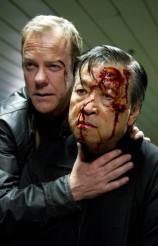 © 2014 Chris Raphael/FOX
Jack (Kiefer Sutherland) proves that Cheng (Tzi Ma) is alive on the season finale of 24: LIVE ANOTHER DAY 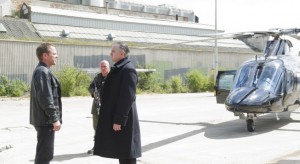 Jack (Kiefer Sutherland) surrenders to the Russians in the season finale of 24: LIVE ANOTHER DAY | © 2014 Chris Raphael/FOX

I really have nothing bad that can be said about the entire 24: LIVE ANOTHER DAY experience.

From beginning to end, it was quality TV. Loads of action, loads of Jack (Kiefer Sutherland) being Jack, loads of character deaths, lots of twists and swerves and above all else a smart program that doesn’t just end with fluffy happy bunnies everywhere.

The ending of 24: LAD was extremely dark. After saving the world from the brink of World War III, Jack learns that Chloe (Mary Lynn Rajskub) has been kidnapped. He gets an ominous cell phone call to “set up the meet” and we fast forward 12 hours – a first in 24 lore – to the next day where everything is the opposite of fluffy happy bunnies.

Let’s talk Audrey (Kim Raver) for a second. Her death came very unexpectedly because it looked like Kate Morgan (Yvonne Strahovski) and the other CIA operatives had saved her from the sniper, only for her to get shot by another shooter a few minutes later. Smart. Have us lean one way and pull the rug out from us the next. After the flash forward we get a horrible and extreme sad dialogue from President Heller (William Devane) who admits to the British Prime Minister that his Alzheimer’s had him already guessing his own judgment and in the end he “won’t remember her even had a daughter who died in a horrible way.” Like just take my heart from my chest, throw on it on the ground and stomp on it a few more times 24, sheesh.

Audrey was a great character on the show and much like Michelle and Tony had long multiple season story arcs. But as is the case with this show, if you aren’t Jack Bauer (and probably Chloe) you are expendable. The longer you are on the show, the more likely you are to be taken out. I swear it looked like Jack was going to put a bullet in his head when he heard Audrey was dead. Why else would he take out his pistol at that point? Only the sound of Cheng’s (Tzi Ma) henchmen bring him back to the realization that he still has work to do.

Back to after the fast forward, we see Jack and Belcheck (Branko Tomovic) arrive at a ruined industrial area outside of London. There he sees Chloe who had been kidnapped by Russians. It is indeed an exchange. Jack for Chloe. Jack warns the Russians that if he threatens her or his family in any way, he’ll get a reckoning. But volunteers to get into the helicopter waiting for him no doubt to await torture and his comeuppance for what happened in Season 8.

Sorry a quick tangent here. Am I the only one that wanted to know more about the Belcheck relationship with Jack? They never talked about it but this dude, Belcheck, does whatever Jack says. Kill this guy. Blast open the CIA headquarters in London. Storm a ship stocked with dozens of heavily armed bad guys. What blind loyalty is this? Where did they form this bond and what did Jack do for or to this guy to make him follow him around and be his highly skilled (and good shot) battle buddy?

In all, the 24: LAD finale had everything we wanted: Plotlines tied up, future storylines possibly in place, a major character death, a beheading with a ninja sword, loads of random bad guys getting one-shot by Jack Bauer (and Belcheck), an emotional ending on multiple levels, a clever to the gullet, a knife in the throat and 2014 War Games.

They need this show to return. Maybe not next year or the following year but Jack Bauer and the brilliance that is 24 needs a place in this world and on our televisions.