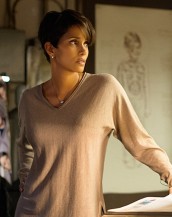 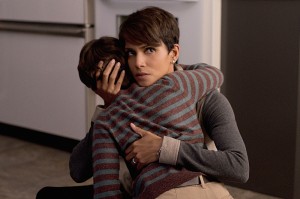 In CBS’ new Wednesday night science fiction drama series EXTANT, created by Mickey Fisher, Halle Berry plays U.S. astronaut Molly Woods. Molly has a complicated life. Her husband John (Goran Visnjic) is a scientist whose work in artificial intelligence has resulted in the couple’s young son Ethan (Pierce Gagnon), an A.I. intelligence in the body of a boy. John views Ethan as a real child, but Molly is not so sure. Molly has just spent more than a year on a solo mission aboard the U.S. spacecraft Seraphim, with no direct human contact. She is therefore stunned to learn when she returns to learn that she is pregnant. Who, or what, is the father? What does the entity want? What will the child be? And how will this biological being interact with the Woods’ artificial intelligence child?

Greg Walker (VEGAS, WITHOUT A TRACE, SMALLVILLE, THE X-FILES) is one of EXTANT’s executive producers, along with Steven Spielberg and star Berry. When the main Q&A for EXTANT finishes up at a CBS press event, Walker remains to answer a lot of follow-up queries.

AX: How did you wind up with Halle Berry as your lead and co-executive producer?

GREG WALKER: I have to credit Halle Berry’s representatives, because they came after us very quickly when the script was just out in the ether, when it was passed around and creating such buzz. I don’t know if you followed that story last summer, but Mickey’s script was this kind of first project, a guy that nobody had heard of, he wrote this script that everybody read, including myself, and got super-excited about it. When we did, Halle’s people started calling us immediately. As soon as I got attached, I was coaching a Little League game, coaching first base, when my phone rang and it was her agents saying, “We want Halle in this.” So we luckily got who we wanted most, who wanted it as well.

AX: In real life, Halle Berry has a new baby. How does she work that in with her shooting schedule?

WALKER: Well, Halle has built a nursery on stage, so she can have her kids there with her. She has an infant, as well as her daughter. But mostly it’s about her accommodating us. I mean, she’s an incredible person. She’s up in the middle of the night nursing and then coming in to a six AM makeup call. She’s extraordinary in her ability to balance the two of them, which is in many ways – it’s not a “mother” show, per se, but she brings a lot to the character about a woman who can balance her career, the need to be in a relationship with children and your partner, and the need to fulfill your own desires and goals in a profession.

AX: Does EXTANT get into what people want out of parenthood? Having a robotic child seems in some ways to be at odds with the normal parenting experience

WALKER: Yeah. A lot of it is, there’s a certain kind of blindness an inventor has about his own creation and where his personal needs are being met or not being met by that creation. So a lot of the story right now is, there’s a hubris [of] an inventor who creates something in his own likeness, and that godlike story plays out for John in many different ways, mostly in that, for an A.I., the progress is unpredictable. Even though John wants to limit the A.I.’s input, as human-only input, he’s not enhanced with certain kinds of accelerated languages, he’s not able to learn a Tchaikovsky concerto on the violin in one second. You could teach the computer that, but he doesn’t want Ethan to learn that way, he wants Ethan to learn from human experience. The idea is that ultimately, if we want robots and technology to exist in our world without squashing us or tearing us apart, they need to function the way that we do. And so it’s this idea of maybe potentially creating a soul for a robot, a soul for the technology.

AX: How does John come to create Ethan in the first place?

WALKER: He’s an exceptionally gifted A.I. engineer who’s worked in A.I. for awhile, so he’s worked in other applications of A.I. And I think the central piece he has is, with technology, to its own end, we’re talking about where we’re all going with robotics and A.I.-driven robotics, could divide us, essentially because they don’t replicate the human experience. Whether you’re connecting with your iPhone right now or your iPad, it’s something that doesn’t give back to you. And ultimately, the more that we walk down the street and you see all these people individually connected to their devices, the more we see that we’re not connected to each other. And that is a concern to John. So John wants to create a humanic – that’s what he calls his android son – that could connect back, that could actually give back. Given that we are not going to get away from technology, it’s not going to go away from our lives, we’re not going to become Luddites, we’re going to still have technology in our lives. That’s inevitable. How do we imbue that technology with the best of us?

AX: He’s not worried that if the A.I. turns out to be, let’s say, an unpleasant person, it would also be a very hard to stop person?

WALKER: I think John, like many great visionaries, worries less about the negative and sees the positive. There are people around him who firmly believe that to be the case. And that’s the threat that Ethan represents.

AX: Speaking of worries, does Molly contemplate terminating the pregnancy? It seems like that might be a normal response to being told, “You’ve come back from space in a situation where there’s no possible way you could have had a human partner and you’ve got something in you.”

WALKER: You look at the first eight episodes or nine episodes of our show – the total time span is less than two weeks, and it’s a little indication of how quickly the story moves and how quickly decisions are made. So no, she doesn’t, because she wants to figure out what it is, and before she can consider that, actions are taken that make that question no longer pertinent.

AX: Is the bigger threat having an alien baby, or is it having a humanoid robotic child that could potentially take over the human race?

WALKER: Those are the two parallel tracks, right? At what point are they going to cross? On one side, people are concerned – not the people at the Space Administration about the Ethan character – but people in the world. We have the character Yasumoto, who is funding this Humanics project, whose funding John courts in the opening episode, and he’s somebody who’s interested in seeing how far it’s going to go. Can we be immortal? If [a man’s] memory and his soul were put into a hard drive, could we just have ultimate many [versions of that man] down the line?

AX: Will we flash back to Molly’s time in space throughout the series, or will it only be in the first couple episodes?

WALKER: We flash back a few times in space, and other people’s experience in space, because it’s not the only spaceship up there. The Seraphim has also had other occupants, so there will be many opportunities to go back to the Seraphim.

AX: You’ve talked about Steven Spielberg wanting to show Molly in zero gravity. Can you give some more examples of what he brought to EXTANT?

WALKER: Well, certainly the sense of wonderment in the storytelling, his expertise in crafting very human and emotional stories but that have extraordinary, sensational elements to them. So it’s science fiction – yes, for sure. He is the guy that, when you’re sitting across the other side of the table, you realize he’s the most successful writer, because he wrote a lot of those, in the history of the business for telling those types of stories, if not any kind of story. So it’s like playing tennis with the very best tennis player in the world.

AX: How do you balance delivering information every week and maintaining the mystery?

WALKER: Without blowing up the mystery? I learned working on X-Files from masters of that, from Chris [Carter] and Frank [Spotnitz] and John [Shiban], how to, with mythology storytelling, always leaving the viewer wanting more. But we still have a mandate that each episode, you have to learn something new, about a character, about a story, you didn’t know before. What’s interesting is, we have now a multi-layered mystery, I hope people are intrigued by it, over the course of time, so that we can give little pieces about our characters or larger pieces about the plot and not feel like we’ve exhausted it all.

AX: Are there any standalone components to EXTANT episodes?

WALKER: No. And CBS has been great about giving us the opportunity to tell this in a serialized way. I’ve never worked that way before, and it’s a hoot. You get to really explore what is the weave of these characters and these stories and how far can you go with them – the hardest part is actually containing it in twelve [episodes] in a way that feels compressed and dramatic in a way that feels fulfilling.

AX: How many seasons do you have loosely mapped out?

WALKER: Well, we’re already looking at Season 2 with some big ideas, but that’s a long way from reality. We’ve got a big season to work on.

WALKER: We never did. Mickey wrote a pilot script, and then we started hanging out in coffee shops and talking about what we could do with the story and where we could go, and there are some colliding trains that he’s built into his story naturally. There’s the alien baby and then there’s the Humanics child, and those feel like, from a storytelling perspective, trains that need to collide some place and some time soon.

AX: Would Halle Berry be back for a second season?

AX: What are some of the big influences that you can cite from film or television or books?

WALKER: There’s a ton. On the headier side, there are [Andrei] Tarkovsky movies we love – CLOSE ENCOUNTERS is a movie where we went and pitched the story, we centered this on CLOSE ENCOUNTERS, because in a similar way, Richard Dreyfuss plays a character, an ordinary man who sees something extraordinary – how does he react to that? And three chapters of our storytelling are basically what we call the CLOSE ENCOUNTERS chapter. And that’s the big ending of our three chapters for the season. It’s a movie that connects to me emotionally about a family story, about a man trying to preserve his family, but still trying to see what’s out there, and a story about what’s out there, and what does it mean, and is it benevolent and what does it want from us? So we use that. And X-FILES just in terms of, there’s a scary element to our show. And so how it’s filmed and how the stories are told and how you let out that information in doses are all – those are all [influences]. But everybody in the writers’ room comes out with something different.

AX: Is there anything you’d like to say right now about EXTANT?

WALKER: How fantastic Halle is. When I’m watching her [interact with the press], I realize that radiance that you see and that warmth is everything she infuses into the character.