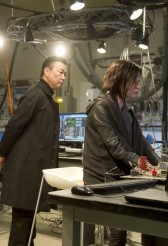 In a span of a few minutes, this show ramps up to possible World War III

I really like that they are coming full circle in 24: LIVE ANOTHER DAY.

Not only have they continued the ongoing interest in the Russians getting ahold of Jack Bauer (Kiefer Sutherland) but they have brought the Chinese back into the mythology with Cheng Zhi (Tzi Ma). You remember him right? The dude that kidnapped Jack way back when and tortured him for an entire year until Audrey (Kim Raver) went to China and got him back – only to suffer her own mental breakdown after they took, uh, liberties on her as well.

Now, 24: LIVE ANOTHER DAY is bringing him back into the fold in the worst way possible. Not only was he the man behind why Adrian Cross (Michael Wincott) wanted to get his hands on the hacking device that can control U.S. military vessels but he also uses Chloe (Mary Lynn Rajskub) to enable the device to hack into a nuclear submarine and target a Chinese aircraft carrier.

Obviously, this is bad news. The world now stands on the brink of World War III and Cheng is to blame. We do not know what his motives are at this point but the fact that in one fell swoop the show went from trying to stop a terrorist from attacking England to potential global, devastating war is a pretty big thing.

As per usual, 24 does always up the stakes but I can’t remember a time when the fate of the whole world was really at stake at this point. Going bigger is a good way to go but with only two episodes left, will there be enough time to actually deliver everything we want from this development? Not sure but I really enjoy the fact they went that much further with it.

The other full circle development has to do with Mark Boudreau (Tate Donovan) covering his ass after he forged President Heller’s (William Devane) signature and gives up Jack’s location to the Russians. And they take little time in trying to get him by ramming the car Jack and Kate Morgan (Yvonne Strahovski) were in and opening fire.

With two episodes left, what are we going to see and how will it end? That is something that is to look forward to indeed.