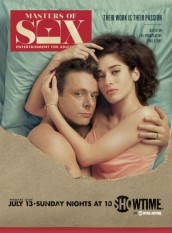 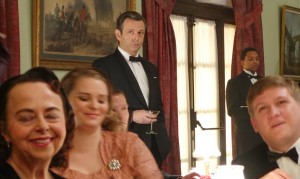 Now in its second season on Showtime, Sundays at 10 PM, and renewed for a third, MASTERS OF SEX chronicles the unusual personal and working relationships of pioneering sex researchers William Masters, played by Michael Sheen, and Virginia Johnson, portrayed by Lizzy Caplan.

Based on Thomas Maier’s nonfiction book, Season 1 of MASTERS showed how Johnson came to work for Masters, how their study into human sexuality progressed and how they eventually became sexually involved with one another – as part of the study – even though Masters is married to Libby (Caitlin FitzGerald). The first season earned Allison Janney an Emmy Award for Guest Actress in a Drama Series – she plays Margaret Scully, a university faculty wife trying to come to grips with her husband’s homosexuality – and Emmy nominations for Caplan and for Beau Bridges (as Barton Scully, Margaret’s spouse).

In Season 2, Masters, with Johnson in tow, has tried working at several different hospitals. The story jumped ahead three years midseason and now Masters and Johnson have their own clinic.

Series creator/executive producer/show runner Michelle Ashford is on the red carpet for the Paley Center’s MASTERS OF SEX event. A few months later, Showtime hosts a MASTERS set visit for the Television Critics Association press tour, where Ashford can be found in the doorway between the Masters’ kitchen and backyard sets. This interview is compiled for both conversations.

ASSIGNMENT X: Were you confident of a Season 2 pickup, or were you worried at all?

MICHELLE ASHFORD: No. If you’re on a [broadcast] network, you just have to blink the wrong way and you’re canceled. On cable, if you’re doing a good job, you really don’t get canceled. So we felt very confident that our show would come back. Our show did well last year, and we thought, “Yeah, we’ll be back.” But then you get to plan ahead.

AX: What are you proudest of in Season One?

ASHFORD: I’m so proud of our cast. I love our cast. I’m proud that we actually got it off the ground – that’s sort of a miracle. I think we started a good story. I’m proud of that. I feel like it only gets more interesting, this story.

AX: Annaleigh Ashford plays Betty, one of your regular characters. Are you related, or is the same surname a coincidence?

ASHFORD: Isn’t that lovely, that we have the same last name? No, I wish I were her sister, though.

AX: Season 2 picks up very shortly after Season 1, but you’ve said that wasn’t always the plan. When did you decide that you were going to do that?

ASHFORD: Well, I did have this initial idea that we should just pick up three years later, that we should have this radical time jump. And then we talked about it, and we realized, you want to know what happens after that doorstep [when Masters shows up at Johnson’s home to say he can’t live without her]. How does that actually play out? So we decided to go back, but then we do make a big change in the middle of the season; we move, time-wise. So in a weird way, it’s like two small seasons, actually, in our [second] season.

We are introducing a lot of new characters. Their world changes radically. Our show is really going to change a lot every year and this year is no exception. So yes, we go in a very different direction and we have a lot of new characters. One of the great things about this show is, I realized that people can come back, like Annaleigh Ashford is back.

AX: And is there anything that you changed in the writing because of seeing how things played out, for instance, “The relationship between Mrs. Scully and Teddy Sears’ character Dr. Austin Langham is so amazing, we should have more of them”?

ASHFORD: Yes, well, Allison Janney was undoubtedly the inspiration for as far as we took that character. And Beau Bridges was brilliant and such a surprising choice to play a man with that kind of predicament. And so yes, in the beginning, the first episode of this season, we really play to that, and it’s just because we know they’re so compelling and great, the actors, and the characters.

AX: What have you learned in the making of this that’s been the most interesting or exciting to you?

ASHFORD: I literally learned facts about sex that I did not know, if you can imagine in 2014, like you can still be surprised by that, and also, you spend so much time talking about the complexity of [the Masters and Johnson] relationship that you can’t help but think about your own way of moving through the world and why you do what you do. It’s been fantastic.

AX: Michael Sheen has said that the way you as writers work with the actors is that you’ll all discuss a scene in great depth, so that by the time it’s written down, everybody knows what all the undercurrents should be …

ASHFORD: We do. We do talk a lot and we talk a lot to our actors. Michael has been very instrumental in the discussion of formulating his character and – I know this happened with Bryan Cranston [on BREAKING BAD] – at some point, it’s just this continual loop of, you give them material, they give you feedback, you take their feedback, you put it in the material. You kind of don’t know where one of us ends and the other begins any more, honestly. And it’s great, because that’s what’s the fun of television.

AX: Had you ever worked this way before?

ASHFORD: I’ve been on series before and I’ve run series before, and I’ve done many series, but I think we may be in here for the long haul, and I’ve not done that, where you literally spend years with the same people, trying to formulate the same story.

AX: There’s a scene in the first episode of the second season where Johnson tells Masters, regarding their sexual relationship, “We’re not having an affair” like it’s a good thing, and he’s so hurt that he feeds it back to her like it’s a bad thing …

ASHFORD: That’s my episode, and I do remember sitting there and writing that scene …

AX: Are there screen directions for how to play the scene on the page, or has that been covered in discussion, or do they just understand the characters so well at this point that they don’t need much of that.

ASHFORD: I will say, Michael and Lizzy both are unbelievably respectful of the script. So I never show up at the set and have them throw it out, ever. It was a very, very simple scene. They’re sitting in the lobby. So there are no stage directions, it’s really entirely dialogue. But what they do is, they take that dialogue and they infuse it with all the unbelievably complex subtext that’s going on. Here’s what the subtext usually is [on the page]. It may be a parenthetical saying “beat, uncomfortable,” or “takes a moment,” but it’s never like, “This is actually what he’s thinking.” They can figure all that out. But by the dialogue, you can follow the map of actually what’s deeply happening. Usually.

ASHFORD: I am so happy to hear that, because our show’s kind of quiet.

AX: Is there anything else you’d like to have known about MASTERS OF SEX right now?

ASHFORD: We’re on a really fun ride, I think, and our show is going to change a lot every year, so check it out.