Well, no one saw that opening coming 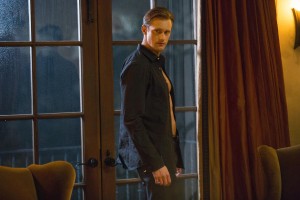 It’s safe to say that the beginning of the TRUE BLOOD episode “I Found You” contains a scene no one foresaw. Jason (Ryan Kwanten) tracks the missing Eric (Alexander Skarsgard) to a mansion in Bon Temps, where they proceed to make love. Alas, this turns out to be simply a dream Jason has while he’s passed out in a church pew. It’s fun, it’s sexy and it doesn’t do anything to move the plot forward that we can tell.

Since it seems like a good idea to get the freaked-out townspeople of Bon Temps to do something productive, Sam (Sam Trammell) suggests they clean up Bellefleur’s Bar and Grille. Sam, Sookie (Anna Paquin) and Alcide (Joe Manganiello) join Sheriff Andy (Chris Bauer) and deputy Jason as they search for the Hep-V-infected vamps who attacked the town and kidnapped Arlene (Carrie Preston), Holly (Lauren Bowles), Sam’s girlfriend Nicole (Jurnee Smollett-Bell) and others.

Arlene and Holly recognize one of their captors as Betty Harris (Lily Knight), who was a schoolteacher for their kids before she was turned. They appeal to Betty’s humanity and Betty hatches a plan to release them – but then explodes from the Hep-V before she can get them away from the other, more brutal vamps (though the other vamps are asleep when this happens).

In Sam’s absence, jealous and prejudiced townsperson Vince (Brett Rickaby) tells everyone at Bellefleur’s that Sam is a shapeshifter and persuades them to form a mob to storm the sheriff’s station and arm themselves with the weapons there. Deputy Kenya (Tanya Wright) winds up siding with the mob. Adilyn (Bailey Noble) tries to stop Kenya, accidentally fairy-zaps her and winds up riling up the irate humans further.

Lettie Mae (Adina Porter) goes to see her nephew Lafayette (Nelsan Ellis). She wants some V, which she claims will let her see Tara. Lafayette knows his aunt’s history of alcoholism and addiction and is sure she only wants to get high. Denied by Lafayette, Lettie Mae goes home and intentionally injures herself so that vampire houseguest Willa (Amelia Rose Blaire) will give her blood.

In the neighboring town of St. Alice, Sookie et al find only devastation. Sookie finds the diary of a young mother who was in love with a vampire, which causes Sookie to remember her own first love for Bill (Stephen Moyer). Alcide tells Sookie that she has nothing in common with the young mother beyond having a vampire as a first love and that the current situation is not Sookie’s fault.

When they get home, Sookie persuades Alcide to take a shower, then sneaks out to see Bill. Sookie asks Bill if he can still sense her fear.

It’s a little peculiar that the most compelling scenes in the episode are between Arlene, Holly and Betty – it’s not that Preston, Bowles and Knight aren’t wonderful actresses, it’s just that we expect a little more dynamism from the more central characters.

However, poking around in a post-apocalyptic small town makes up a large part of the action. Yes, it seems like something needs to motivate Sookie to confer with Bill – this mess is largely his fault, even though if he wasn’t quite himself when he created it – and the diary is a good way to do it. Still, it seems like there could have been just a little more plot and a little less atmospheric doomsday tourism, since nothing much happens in St. Alice.

The townspeople turning all anti-supernatural and vigilante may pay off, but in this episode, at least, it’s set up and no clash.