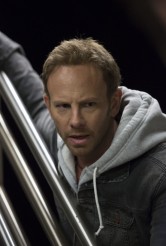 © 2014 Eric Liebowitz/Syfy
Ian Ziering stars as Fin in SHARKNADO 2: THE SECOND ONE
Interviews

Ian Ziering grabs the chainsaw again in SHARKNADO 2: THE SECOND ONE

The actor talks fighting flying sharks in the SyFy sequel 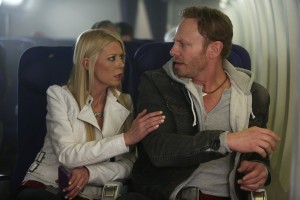 Tara Reid as April and Ian Ziering as Fin in SHARKNADO 2: THE SECOND ONE | © 2014 Jaimie Trueblood/Syfy

In 2013’s surprise hit SHARKNADO, Ian Ziering played heroic Fin Shepard, who almost single-handedly – with a chainsaw in that hand – saved Los Angeles from a tornado full of sharks.

In SHARKNADO 2: THE SECOND ONE, which premieres on Syfy Channel Wednesday, July 30, Ziering is back as Fin. Fin and reconciled ex-wife April Wexler (Tara Reid, also reprising her original SHARKNADO role) are on their way to New York City to promote April’s book about surviving the previous year’s event. However, they don’t even land in the Big Apple before they’re once again grappling with storm-borne Great Whites, and things only get worse once they arrive.

Ziering, a New Jersey native, starred in the original BEVERLY HILLS, 90210 and played a humorous version of himself in the late Tony Scott’s feature film DOMINO, among other credits. He has some experience with animated mayhem – he voiced Dr. Nick Tatopoulos on two seasons of GODZILLA: THE SERIES and Harry Osborn on the 2003 SPIDER-MAN series – but he says he’d never done anything like SHARKNADO before. (Not surprising – almost no one had.)

Ziering, who’s first name is pronounced I-on (like a positively charged neutron) is at Syfy’s Beverly Hilton Hotel poolside screening of SHARKNADO 2 for the Television Critics Association. He takes time to answer some questions about his second stint fighting giant fish as they’re flung by water funnels into a major metropolis.

AX: This is your second SHARKNADO movie. Can you compare it to the first one?

IAN ZIERING: It’s as good as the first one, only better.

ZIERING: My initial reaction was, “Please God, I hope no one ever sees this.” I didn’t think it would reach the level of success that it has clearly attained. It was a movie that did something that it didn’t know it could do.

AX: Had you previously aspired to be an action hero?

ZIERING: I’m always aspiring to do new things, things that I hadn’t done before. And this movie was a chance for me to mix two of my favorite genres, action/adventure and science fiction.

AX: And did you have any particular feelings about sharks before this?

ZIERING: Yeah. Stay away from them. I had a healthy fear of sharks.

AX: Fin’s signature weapon is the chainsaw. He uses all sorts of things as weapons, actually, but he’s got one again in SHARKNADO 2. Had you ever used a chainsaw before SHARKNADO, onscreen or off?

ZIERING: To cut down trees, I’ve used a chainsaw. You don’t use a chainsaw in normal life like I used it in this movie – you don’t go swinging a chainsaw.

AX: Did somebody how to teach you how to do that without injuring anyone?

ZIERING: Unfortunately, no. I got cut up a little bit – not while I was running, but it’s sharp tool, so just handling it can be dangerous.

AX: What was the most physically difficult part of doing either of these films? 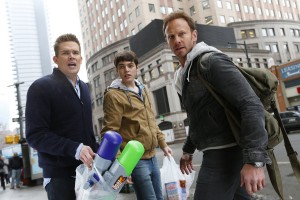 Ian Ziering as Fin, Dante Palminteri as Vaugn, Mark McGrath as Martin in SHARKNADO 2: THE SECOND ONE | © 2014 Will Hart/Syfy

ZIERING: It’s just nonstop running and gunning. It’s a very rigorous, action-packed movie. I’m seldom standing still. And if I am standing still, it’s only because I’ve stopped running. Only to run again.

AX: If there is one, do you think you might do SHARKNADO 3?

AX: Is there anything else you’d like to say about the experience of SHARKNADO 2?

ZIERING: No. It’s been great, I’ve been working with a fantastic cast and a great script [by Thunder Levin] and, you know what, we had a lot of fun and I think the audience will, too.