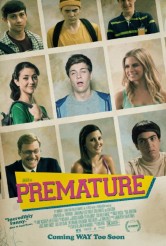 PREMATURE starts out as a teen sex comedy with a GROUNDHOG DAY twist. High school senior Rob Crabbe (John Karna) is about to meet with the admissions dean (Alan Tudyk) of Georgetown University, which was attended by both of Rob’s parents. Alas, the meeting goes badly. Then hot classmate Angela (Carlson Young) persuades Rob to miss his standing spelling bee-watching date with his best female friend Gabriela (Katie Findlay) in favor of losing his virginity. The excitement is such that Rob has a premature reaction (hence the title) – and winds up in bed, about to start the day over again. And again. And again.

For people who can’t guess where this is all going, some remedial RomCom viewing is probably in order. For the record, Karna is agreeable, Findlay is very likable and Tudyk gives it his all. There aren’t any really good jokes and the explanation of why Rob keeps repeating the day doesn’t really fly, but other movies skate by with these types of flaws, so what the heck.

Where PREMATURE first skids into the objectionable is in its use of racial stereotypes. The white leads make fun of other ethnic groups. This is perhaps realistic among upper-middle-class white high school kids; it doesn’t make it palatable. Then our “hero” blackmails a female fellow student in the hallway into making out with the male hall monitor and goes on to grab a female teacher’s breast in front of her students. The police are called because Rob is up on sexual harassment charges, but then the inevitable happens, he wakes up again and the slate is wiped clean. The filmmakers seem not to understand the difference between a social error and sexual assault, which is deeply depressing. In the interests of saving time and spleen, this review shall end here.