Home » Get on Up review 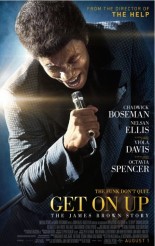 © 2014 Universal Pictures
GET ON UP
Reviews

Movie Review: GET ON UP

An entertaining but somewhat oblique biopic of the late James Brown

The late soul singer/entertainer James Brown was known as “the hardest-working man in show business” and the biographical drama with music GET ON UP shows us why in detail. It is also consistently entertaining and intermittently moving, but by the end, we realize that it hasn’t been all that illuminating. We see Brown’s traumatic childhood, which suggests the adult Brown suffers from PTSD, and leading man Chadwick Boseman shows us an impassioned, often desperate soul shining from his eyes. However, the script by Jez Butterworth & John-Henry Butterworth, from a story by the duo and Steven Baigelman, and the direction by Tate Taylor, don’t provide enough connective tissue for us to feel like we intimately understand the workings of Brown’s psyche or his genius. Indeed, we get a much better picture of the effects of Brown on those around him.

Not that this matters all that much. With a soundtrack of fabulous Brown songs (as well as a few contemporaries), and Boseman incarnating his stage performances convincingly, only someone immune or actively opposed to soul/rock could fail to enjoy what’s here.

GET ON UP jumps backwards and forwards to events in Brown’s life. We see him as a child (well-played at different ages by Jamarion Scott and Jordan Scott) with an abusive father (Lennie James) and a mother (Viola Davis) who fled. A stint wrangling customers for “Aunt” Honey’s (Octavia Spencer) bordello brings out James’ innate showmanship, and he’s impressed by church preachers, but it’s when he gets arrested for petty theft and meets gospel group singer Bobby Byrd (Nelsan Ellis) that James is set on the path to freedom, both literally – Bobby persuades his family to offer James a home so that he can meet parole conditions – and musically.

The most intense and interesting relationship in the film is between Brown and Byrd, portrayed here by Ellis as a man of profound feeling and loyalty. When we see Byrd as part of Brown’s backup group the Famous Flames, Ellis gives him a sense of overwhelming joy. When Byrd – along with the rest of the Flames – is insulted by Brown, his quiet pain feels bloodstream deep.

But this is also where GET ON UP falters. When Brown’s record label, with Brown’s approval, demotes the rest of the band, they all walk out, hurt and disgusted – and then show up later on without any scene showing them coming back. There’s another walkout later, which leads to the inevitable question – if these events are important enough to include, why don’t we see how the band members justify to themselves returning for Brown’s peculiar brand of leadership.

Furthermore, as this is Brown’s story, why does he do some of the things he does? Plenty of successful singers are eccentric, but how does Brown come by his particular peculiarities, some of which are guaranteed to breed resentment? There’s also the matter of him hitting his wife (Jill Scott, given little to do but impressive all the same) in a bout of wrongful jealous rage, which the movie seems to view as a minor failing. No, that’s battery on a helpless victim.

There are some terrific scenes, though. Brown’s insistence on playing a New York concert after the Martin Luther King assassination, and calming the crowd there, is a thrilling depiction of an historical event. Showing the very young Rolling Stones watching Brown from the wings and learning from him is also telling (since Mick Jagger is one of the executive producers here, it seems safe to believe this bit) and some exchanges between the then-unknown Brown and the then-almost unknown Little Richard (an electric Brandon Smith) are engaging, whether they happened this way or not.

In the end, we feel like we’ve learned facts about James Brown and his impact on people who knew him personally and on musical culture in general, but not all that much about the core of the man himself. However, we’ve spent the time listening to his music and watching a dazzling performance by Boseman, so GET ON UP works well enough.

Article Source: Assignment X
Article: Movie Review: GET ON UP