Guardians of the Galaxy review 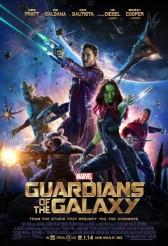 Movie Review: GUARDIANS OF THE GALAXY

An entertaining and eventually charming addition to the Marvel movieverse

For a while, GUARDIANS OF THE GALAXY teeters on an edge. Yes, the visuals are striking and the jokes are funny, but at first, between self-centered thief Peter Quill (Chris Pratt), extremely angry Gamora (Zoe Saldana), dismissive genetically-modified raccoon Rocket (voiced by Bradley Cooper) and walking tree-of-few-words Groot (Vin Diesel), we’re not sure we want to spend time with these folks. Then they start jelling, the Rube Goldberg plot structure comes into full focus and GUARDIANS finds its groove. It’s a tribute to all parties concerned that by the end, we’re so thoroughly charmed and entertained that it takes a bit of recollecting to remember its somewhat rocky start.

We meet Peter Quill as a little boy whose mother dies of cancer. He runs from the hospital room to be met with a blast of light. As an adult, Peter calls himself Star-Lord. He obtains something that turns out a whole lot of other people want for a variety of reasons. One of these people is the genocidal Ronan (Lee Pace), whose intentions are destructive. Gamora wants the object as well; Rocket and Groot want Peter for the bounty his furious adoptive father (Michael Rooker) has put on his head. Soon enough, we and they can see the galaxy, or at least a heavily populated world, is in immediate danger, which brings out better natures than any of these characters supposed they had.

With Marvel very carefully handling its film franchises, we can be sure that GUARDIANS will line up with other installments, even though practically none of it takes place on Earth. We see some characters who appear in other parts of this universe, though it’s possible to walk into GUARDIANS (more so than, say, the movies that lead into and out of THE AVENGERS) without any prior knowledge and still feel completely informed for the purposes of this film.

Director James Gunn, who also worked on the script, as did Nicole Perlman, based on the comic books by Dan Abnett and Andy Lanning, demonstrates a real love of the characters that becomes more evident as the film evolves. His choice of classic ‘70s and ‘80s pop and rock music to both heighten and tweak emotions (thanks to a cherished onscreen prop) gives GUARDIANS an oddly timeless feel. The songs speak to a more innocent, heartfelt time, belying Peter’s outward callousness; at the same time, their unexpected aptness sometimes makes us laugh out loud.

Gunn has a knack for one-liners and setting up snappy dialogue exchanges. He also gets a lot out of the 3D process. While it’s not entirely necessary to appreciate GUARDIANS, the IMAX 3D is deep enough and handsome enough to usually mitigate the discomfort of the heavy 3D glasses.

Pratt is a perfect smartass antihero who moves over into hero territory without losing his street cred as the plot unfolds. Dave Bautista, as another member of the Guardian group, displays crack timing as the literal-minded Drax. Groot is a splendid creation – bravo to both Diesel and the effects team – and Saldana demonstrates that she can kick alien ass just as well when she’s physically present and painted green as when she’s motion-captured and painted blue. Cooper gives Rocket a just-right mixture of arrogance, cynicism and hurt. Pace is an impressive psycho baddie and Rooker bridges hilarious and menacing with aplomb.

GUARDIANS OF THE GALAXY has spectacle and sentiment, surprises, high stakes and great lines, a reliable example of Marvel magic at work.