A lot of emotional action and a few surprises 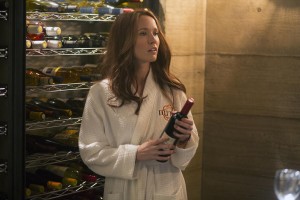 TRUE BLOOD’s episode “Fire in the Hole” has a number of genuine surprises – there are flashbacks and revelations that are startling and welcome, along with one tragic major character death.

Among the welcome (to the audience, not the other characters) jolts is the reappearance of the nasty, ambitious Sarah Newlin (Anna Camp). Sarah is now hiding out in California and has joined a guru’s cult as both acolyte and lover.

Pam (Kristin Bauer van Straten) has tracked her maker Eric (Alexander Skarsgard) down at last, but he is resigned to dying from Hep-V. We see in flashback Pam and Eric’s first major collision with the Authority, back in 1986 France, when TruBlood was first coming to market and vampires were just about to come out of the coffin. Eric’s initial dismissal of the Authority led to the death of his human lover. Eric feels guilty about this, about Sookie and the losses of Godric and Nora. Pam tries to find something that will rouse Eric to fight and tells him that Jason (Ryan Kwanten) didn’t kill Sarah Newlin after all – the revelation gets Eric to his feet.

Back in Bon Temps, Sookie (Anna Paquin) sets herself out as vampire bait with the help of Bill (Stephen Moyer). The idea is to get the Hep-V vamps to kidnap Sookie, so that Bill can follow them and destroy them. However, Sookie has to ingest more of Bill’s blood, since he’s so biologically changed since the last time that there’s physical link to the “old” him. However, Bill still feels the guilt of everything he ever did to Sookie. Sookie confesses she’s worried that boyfriend Alcide (Joe Manganiello) loves her more than she loves him.

The Hep-V vamps put out their own bait – a dazed Holly (Lauren Bowles) – but when they attack Sookie and have silver chains ready for Bill, Alcide in wolf form and Sam as a dog attack. Then Andy and Co. show up and dispatch the sick vamps. Alcide is furious that Sookie took off without him and warns Bill away from her. Then Alcide is shot by more townsfolk in the bushes. Jessica offers to turn him, but Sookie, in tears, rejects the idea.

There are also scenes of Lafayette (Nelsan Ellis) getting friendly with Jessica’s boyfriend James (Nathan Parsons), the Reverend Daniels (Gregg Daniel) opening up to Willa (Amelia Rose Blaire) before banishing her from the house due to Lettie Mae’s (Adina Porter) burgeoning addiction to vampire blood, Adilyn (Bailey Noble) and Wade (Noah Matthews) being rescued from jail by Andy and Jessica and so on.

The dialogue scenes are good, with Sookie’s revelations about Alcide surfacing strongly because until now, it wasn’t clear that the atmosphere between the two characters was intentional. While Paquin and Manganiello have strong chemistry, the tension between Paquin and Moyer is even stronger. Having Pam pull Sarah Newlin as a trump card is an inspired bit of plotting, as practically everybody on the show would jump off their own deathbed to kill her, and Eric’s hardly one to be an exception to that

For sheer fun, though, it’s hard to beat Ellis and Parsons lounging around, with Lafayette high on a medical concoction and James high on Lafayette’s blood. We’d just like to hang out with them.

Then there’s Alcide’s death. It’s a shame to lose the charismatic Manganiello, but it certainly makes a point about the horrible consequences of mob hysteria. It also stops Alcide from having his heart broken by the diffident Sookie, which can be seen as economical writing, a sidestep to prevent the heroine from doing something unlikable, or both.

In any case, “Fire in the Hole” – which features a haunting closing-credits cover of the Steely Dan song – is a strong episode.