Home » True Blood Review May Be The Last Time Season 7 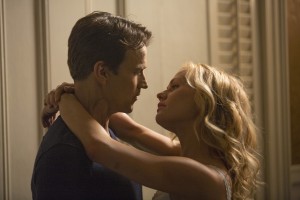 TRUE BLOOD is really going away. This melancholy fact can be felt in “May Be the Last Time, not because there are major character deaths (there aren’t) or even because people are especially gloomy (some people are distraught, but that’s different), but because there’s a looming sense of closure.

Let’s take, for example, Sookie (Anna Paquin) and Bill (Stephen Moyer), characters who started out deeply in love, have gone through practically every emotional permutation possible, and have now just about come full circle. As Bill’s condition worsens and Jessica (Deborah Ann Woll) sinks into despair, Sookie becomes determined to find Bill a miracle. Sookie first tries supernatural Dr. Ludwig (Marcia de Rousse), who claims that nothing scares her, but she flees in terror when she learns that Sookie is the descendant of faerie royal Niall Brigant (Rutger Hauer) – turns out dwarves are afraid of fey royalty.

Sookie then tries calling on Niall, who shows up, but when she asks for a miracle, he shows her, via vision flashback, the miracle of Bill’s wife Caroline (Shannon Lucio) having Bill’s child in the 1800s. Niall says fey magic can’t cure Bill. Sookie tells Bill she wants to stay with him until the end. Bill says, “Okay.” They wind up making love and it seems in some ways that we’re back at the beginning.

Meanwhile, Yakanomo boss Mr. Gus (Will Yun Lee) is trying to get Sarah Newlin’s (Anna Camp) whereabouts out of her sister Amber (Natalie Hall). This is a financially valuable matter now that it’s clear Sarah’s blood, which has cured Amber, possesses the antidote to Hep-V. However, Eric has a flash of Amber as Sarah and kills her. Gus wants Eric to be the face of the Hep-V cure (to be called “NuBlood”) and strikes a deal with him that Eric won’t kill Sarah; Eric looks like he may not honor the deal.

A little girl is horrified to see two evidently crazy strangers with shovels digging in her front yard. These are, of course, Lafayette (Nelsan Ellis) and Lettie Mae (Adina Porter), following the suggestions they saw in their shared vision.

Andy (Chris Bauer) and Holly (Lauren Bowles) continue to search for their missing teens, Adilyn (Bailey Noble) and Wade (Noah Matthews). They are blissfully shacked up at the home of Violet (Karolina Wydra) – until Violet turns on them and chains them up. Jessica feels Adilyn’s peril and runs to find her.

Jason (Ryan Kwanten) is upset to see old best friend Hoyt (Jim Parrack), who doesn’t remember Jason at all, thanks to the glamour Jessica put on him at his request. Jason is also disturbed by his immediate attraction to Hoyt’s new girlfriend Bridget (Ashley Hinshaw). Jason lies to Hoyt and tells him a) that Hoyt’s mother Maxine died as a good person, rather than as part of the lynch mob and b) that Jason got the person responsible for Maxine’s death (this is actually Violet, Jason’s girlfriend at the time).

Finally, Sarah has made it to the abandoned Light of Day Institute headquarters. There she hallucinates Jason, warning her that death is coming for her tonight, deceased ex-husband Rev. Steve Newlin (Michael McMillian) and murdered lover Guru Sanbir Dutta (Shishir Kurup). Steve and Sanbir remind Sarah of her tendencies to lie to herself and get people killed. Then the Yananomo people show up.

All we can think at this point is, Eric, please show some restraint. Maybe you don’t care if you die, but we do, Pam (Kristin Bauer van Straten) does and Sookie needs a cure for Bill, who has returned to being the loving, decent guy we met in Season 1. So Eric, don’t screw this up.

It’s pure joy to see McMillian’s Steve Newlin again in all his super-sunny glory, and having Sarah hallucinate an argument between him and the guru about the merits of Christianity vs. Buddhism is reasonably hilarious.

Kwanten is both affecting and funny as Jason returns to one of his old dilemmas – his profound brotherly love for Hoyt set against his falling for Hoyt’s flame. Parrack is once more a model of openness and sincerity; it’s great to see him back as well.

It’s also a nice surprise to see Hauer back, and the episode deals intelligently with how to bring Niall’s power into play credibly without upsetting the plot construction.

Bauer has a moving scene with Bowles where Andy briefly but absolutely loses it under the pressure of feeling that he’s failed his daughter, and Holly, and the town. To see the gruff, brusque – and perfectly played – character dissolve into a confession of helplessness is to share his ache.

We’re going to miss these people. If Sam is indeed the Mayor of Crazy Town, as Nicole maintained, it’s a Crazy Town where we, like Sam, feel at home.