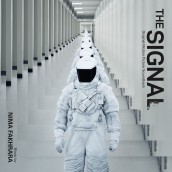 While I’m dying to hear (let alone see) what composer Nima Fakhrara did for Japan’s live action version of GATCHAMAN (aka BATTLE OF THE PLANETS), I can only imagine that it must have caught the attention of THE SIGNAL – with the result being an eerily pulsing sci-fi score with a strong electric undercurrent. In this paranoid tale, three college students get far worse than they bargained for while chasing down a hacker. As they’re propelled into a sterile, claustrophobic nightmare of mad science where things gone from bad to mind and body-bendingly worse, Fakhara’s score tunes strongly into the Trent Reznor / Atticus Ross / Cliff Martinez vibe – yet in much the same way that this impressive, gripping movie warps about any number of cult sci-fi movie ideas (with one film’s in particular) into its own mutant animal. Fakhrara nudges all sorts of chopping, tolling and chiming percussion from the oodles of no-doubt futuristic gear that it took to create this intoxicatingly multi-layered score, creating an overall hypnotic tone with a growing sense of dread and wonder, as if some other culture’s idea of a wondrous gift was being thrust into panicked human form.

Better yet, THE SIGNAL carries with it a surprisingly strong tone of thematic melody in its future music tech, the score gradually opening up new layers of synth-sample complexity along with its ever-amping plot. Fakhrara definitely proves himself as a musician to watch in the burgeoning genre of alt. sci-fi scoring for a soundtrack that effectively conveys THE SIGNAL‘s point of origin is definitely not of this earth, with a mesmerizing, sterile clarity that’s the envy of any ice-cold scientist taking digital-pulse notes of his human lab rats. A terrific, out-of-the-lab payoff gives Gabriel Faure’s “Requiem” a Theremin-rific tone of worthy of a 50s alien invasion flick, as topped off with a trip hop 8-bit beat. It’s as brilliantly batshit a climactic cue that you’ll hear in a score this decade.

Click on the link to Purchase THE SIGNAL soundtrack