© 2014 WGN
The cast of MANHATTAN on WGN
Interviews 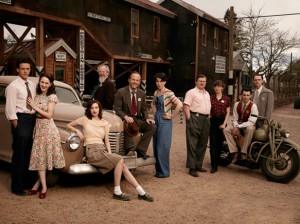 In WGN America’s new Sunday night drama series MANHATTAN, the title refers not to New York City but rather to the Manhattan Project in Los Alamos, New Mexico. This was the code name for the top secret work of scientists who, during World War II, were racing to create an atomic weapon before the Nazis could beat them to it.

While some people depicted in MANHATTAN are historical figures, such as J. Robert Oppenheimer, most of them are characters invented by series creator Sam Shaw.

Daniel Stern plays one of Shaw’s original characters, senior scientist Glen Babbit, who is a kind of sounding board for his younger colleagues. Stern’s first film work was in the 1979 Oscar winner BREAKING AWAY. Since then, Stern has worked on stage, film and television as both an actor and director. The Maryland native served as the narrator for all six seasons of THE WONDER YEARS, directing ten episodes while he was on the series; he also helmed and appeared in the feature ROOKIE OF THE YEAR and is one of the novice cowboys in the CITY SLICKERS movies.

Stern is present at WGN America’s Q&A session on MANHATTAN for the Television Critics Association. When the panel ends, he remains available for some follow-up discussion.

AX: How did you get involved in this project?

DANIEL STERN: Tommy Schlamme [one of MANHATTAN’s executive producers, who directed the pilot] is a dear old friend of mine. I’ve known him since I was seventeen. And Tommy told me about this show and thought I’d be right for this part, I loved the script, and it was a great opportunity to do something on the dramatic side. I’ve done a lot of comedic stuff, so it was good to get my hands dirty in this. I also got to direct the show, direct an episode, so that was another enticement.

AX: Is it difficult to direct yourself?

STERN: No, it’s not that bad. I kind of like it because I’m so busy doing all the other things that I forget about myself, which is the best thing you can do as an actor – just do it and be there and not over-think it – so actually, I should direct all of them. I’d be much better [laughs].

AX: How aware were you of the subject matter of MANHATTAN before you got involved in it?

STERN: Hugely, but not with a lot of depth. It changed our country. We still haven’t put that genie back in the bottle. If you have children or family, it’s always looming over us. But I didn’t know the specifics of the Manhattan Project itself. I knew, yeah, Santa Fe somewhere. But that’s been a real great discovery and it’s the human beings behind this, not just the headlines, but what went into it, the work, the secrecy and the moral dilemma, that we’re creating something horrible for a great reason. So it’s been interesting.

STERN: No, not really. I mean, nothing historical. I’ve patterned him on myself in a certain way. I don’t mean that I’m wise, but as I’m getting older and I’m more experienced, I’m bringing whatever my personal life experience and wisdom to it, and Glen’s a very wise character, much more so than I, but I’m trying to tap into that.

AX: What are Glen’s interactions like with the fellow scientists?

STERN: He’s trying to get the best out of people. I think it’s similar to my directing side, which is, you have to have great people around. And everybody’s eccentric and everybody’s into what they’re doing and I think Glen Babbit’s a facilitator, especially with Frank, John Benjamin Hickey’s character. He doesn’t have people skills to manage this. It takes all the knowledge, it takes all the science, but you also have to grease the wheels, you have to make things happen, you have to encourage people. And I think Glen’s role, besides being a scientific contributor for the science part of it, I think he’s a consigliere where he can help make this happen and he’s inside that world. He gets along with the military, he gets along with the scientists, he gets along with the younger people and the older people. So I like that about him. He makes stuff happen.

AX: Did you have to learn how to do anything to play him?

STERN: On occasion, you get some of this dialogue that’s like, “What the heck am I saying?” So I’ve had to do some homework on that. A couple of science-y things, but they’re not going to let me do anything dangerous – I’m an actor, for God’s sake, don’t give me anything real explosive [laughs]. But the real language and the science – we’ve gone to Los Alamos with our technical advisor. I kind of understand implosion nuclear bombs now, which I never thought I would.

AX: Did you and/or the rest of the company have any concerns about going to Los Alamos in terms of its history with radiation testing?

STERN: It crosses one’s mind, but those people are living there for longer than us. I’m there for five months shooting the show. I think I’m going to get out safe.

AX: How old were you when you started acting?

STERN: Seventeen. We just had a little BREAKING AWAY reunion where we got to see everybody. Dennis [Christopher, BREAKING AWAY lead] looked awesome. But yes, I’ve been at it a long time.

AX: Did you think when you started acting, “This is what I always want to do” or did you think, “I’m going to do this for awhile and make money, and then go …”?

STERN: I didn’t really have a choice. I mean, I dropped out of high school. I was an actor in high school. I always found myself in art – as a sculptor, as a director, as a writer, all these things – so it wasn’t a conscious choice. That was my passion. I wasn’t very good academically. There wasn’t a plan; it just sort of took over. And then I met my wife and then I had kids and then I did that play and then I had that movie and here I am. I’m having trouble believing that. I got my SAG card the other day – I’ve been in the union for thirty-five years or something. I’m turning into that guy. I used to be the young puppy and now I’m the wise old man with all these youngsters around. It’s beautiful.

STERN: I might be doing a new HBO miniseries with David Simon from THE WIRE. Actually, he went to my high school. He was a few years behind me. I talked to him a few weeks ago about the project, and he said, “I saw you [in high school] as Tevye in FIDDLER ON THE ROOF!” I’m hoping that works out, because he’s a genius and I loved that project. But also, when I’m not working, I go back to my sculpture. While we’ve been in New Mexico, I’ve got a new gallery there representing my work, and I’ve done some public art projects – I just had one open in Temple City here and Pasadena, so I feel pretty fulfilled even when I’m not doing the acting thing. I still get my creative juice going every day.

AX: And is there anything we should know about MANHATTAN?

STERN: So much. I don’t know what I’m allowed to say. I think the most impressive thing for me at this point – I love the story and the writing, but these young actors are stars. This group – Ashley [Zukerman, who plays Charlie Isaacs] and Rachel [Brosnahan, who plays Abby Isaacs] and the other kids on the show – they are superstars and they’re so tremendously talented. I was privileged to direct them and to get to really work with them in that fashion and I think that’s going to be the key to our success, is the excitement of this young talent.