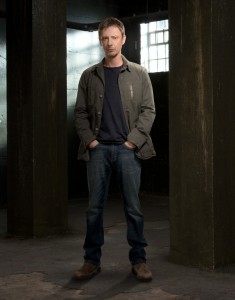 BBC America’s senior vice-president of programming Richard De Croce has been with the network for nearly ten years. De Croce, who is American himself, is very upbeat about BBCA’s many recent successes, including the acclaim for and popularity of ORPHAN BLACK and the worldwide clamor for the new season of DOCTOR WHO. He’s also enthused about new series such as the science-fiction thriller INTRUDERS, currently airing Saturdays at 10 PM (just after DOCTOR WHO), and the upcoming spy thriller THE GAME.

At a party thrown by BBC America for the Television Critics Association, De Croce talks about the whys and wherefores – and of course, the Whos – of the network.

ASSIGNMENT X: At this point, do you have any idea of how many seasons of ORPHAN BLACK there might be or is that blue sky?

RICHARD DE CROCE: Blue sky. We’d love it to go on and on and on, quite honestly.

AX: Did the success of ORPHAN BLACK in any way inspire the pickup for INTRUDERS, in terms of being a BBC America series that’s shown in both the U.S. and the U.K., but is set in North America?

DE CROCE: It’s Brits in America, right? Not unlike COPPER was trying to tell a story about Brits in America in a different period. I think we have that license to start telling stories here about British characters.

AX: And having INTRUDERS on Saturday following DOCTOR WHO …

DE CROCE: We’re trying to build a night, as you know, “Supernatural Saturday.” It was a good fit. We’ve had great success with DOCTOR WHO, ORPHAN BLACK, TORCHWOOD, BEING HUMAN on that night as well, so it’s a nice compliment for the rest of the line-up. It’s very adult sci-fi.

DE CROCE: I don’t know if there could be. That’s our job – to make it more exciting with the new Doctor coming. The franchise, as you know, is now in its fifty-first year and it’s a very, very important show for us. And with the new Doctor, we’ve got to get behind the Twelfth Doctor as well. Peter Capaldi is brilliant.

AX: And is DOCTOR WHO looked at at this point as something that you’re just going to go on as long as …?

AX: With DOCTOR WHO, if or when Steven Moffat eventually leaves, will BBC and BBC bring in someone new, they way they did when Russell Davies left?

AX: You’ve had a trailer for another season of RIPPER STREET …

DE CROCE: That’ll probably be back February or March for us, Season 3.

AX: Any sense if THE MUSKETEERS will come back?

DE CROCE: MUSKETEERS will be back for us. We’ve picked up the second season of that as well.

AX: A lot of the non-genre drama programming, like RIPPER STREET, THE MUSKETEERS, THE GAME, is set in the past. Was that a conscious decision on the part of programming or is that just how it shook out?

DE CROCE: There was a lot of talk in the [BBC America executives’] room about period, but I think it’s cyclical, to be honest. That’s something they’ve been doing in the U.K. for a long time, and for us, we’ll be in the future, we’ll be in the past, we’ll be in the present. I don’t think there’s any mandate to be in the period business. People do like escape, and a lot of that escape is going back to other time periods.

AX: With MUSKETEERS, someone seems to do either a film or television version of that about every twenty years …

DE CROCE: Yes. It’s a classic that’s reimagined, right? We’ve been aware of the project for some time within the BBC for the last few years, and knowing that it was Adrian Hodges, a BBC in-house production, and knowing what it meant to the BBC public service, we were in as early as we could be, and it was a genuine co-production between ourselves, as part of BBC Worldwide, and with the public service in the U.K. Every twenty years, that’s right, there’s either a feature or a TV series. But I think you can point to any legend that gets rebooted every so often, and we’re just happy to be part of this version.

AX: Can you tease anything else that’s coming up on BBC America?

DE CROCE: [Later this season], THE GAME and A POET IN NEW YORK. we announced THE LAST KINGDOM, which will be 2016. ATLANTIS will be back later this fall and then early next year TATAU, and that’ll be also early ‘15. JONATHAN STRANGE AND MR. NORRELL, which I think we’ve already announced, is a seven-part series.

AX: Is there anything you’d particularly like to say about where BBC America is at or where it’s going right now?

DE CROCE: It’s a great time. We are in a very celebratory mood. We know we have an opportunity ahead of us that, if we keep bringing this type of programming to an audience that’s really hungry for smart and innovative content, we have a tremendous opportunity to keep growing the channel and awareness for the BBC brand within the U.S.