A charming episode with legends, robots, and sword fighting! 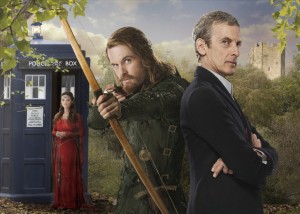 “Robot of Sherwood” is the third adventure in this new season/ series of DOCTOR WHO, and now we’re really picking up steam as far as seeing who this new Doctor (Peter Capaldi) is. We’ve had bits and pieces of his personality and his idiosyncratic routines in the past couple of episodes, but this one really feels like we’re getting a solid look at The Doctor as he is now.

The basic premise of this episode is The Doctor asking Clara (Jenna Coleman) where she would really like to go, anywhere in time and space, and who she would want to meet. She informs him that she would really love to meet Robin Hood; to which The Doctor scoffs, telling her that Robin Hood was no more than a legend and was never actually a real person. Regardless he sets the TARDIS down in Sherwood Forest in the appropriate time period where they are promptly set upon by the real Robin Hood (Tom Riley). The Doctor and Clara get embroiled in the story of Robin and end up in castle controlled by the Sheriff of Nottingham (Ben Miller) which is actually part of a spaceship guarded by robots that look like knights. Then the fun really gets going.

Mark Gatiss is one of the more regular contributors to DOCTOR WHO that you can count on to turn in a solid script. This episode harkens back to the feel of WHO from the 70’s or 80’s; mixing the whimsy of legend with science fiction and action. There’s a fair amount of humor in this episode, and some of it is at the expense of The Doctor instead of him being a part of the laugh. Gatiss really loves the Ice Warriors (after all he did write a modern Ice Warrior story for last season) and he finds a way to work an Ice Warrior reference into this script as well. 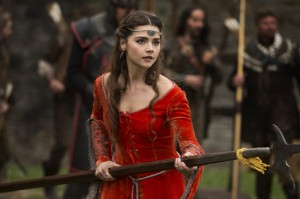 Though the episode is the standard forty-five minutes, the meeting between two heroic legends doesn’t feel that rushed. The Robin Hood legend gets somewhat truncated, but I don’t think the overall tone or feel of the story suffers. Of course Robin and The Doctor do NOT get along, but eventually they put their heads together to defeat the Sheriff and his otherworldly robot army. The first encounter between The Doctor and Robin is one of the best, with Robin challenging The Doctor to a swordfight, and The Doctor defending himself with just a black glove and an incredibly long serving spoon. That single scene helps set the pace and humor for the rest of the story.

Tom Riley, who is a favorite of mine from DA VINCI’S DEMONS is really charming as Robin Hood. I almost didn’t recognize him with the strawberry blonde long hair and beard, but he really creates a loveable version of everyone’s favorite robber rogue. Of course, Ben Miller’s sheriff is the perfect foile to Robin Hood, and he’s so delightfully smarmy that you can’t help but enjoy him onscreen.

Both Capaldi and Coleman shine in this episode in different points. They get the chance to do some new and different things with The Doctor and Clara, and this particular episode has such an air of fun to it, that it’s difficult not to get completely swept away.

The robots are kind of perfect, and the fact that they destroy people by burning them with a cross shaped laser is probably more than a little bit of commentary on the state of Christianity at that time in Britain’s history. I actually can’t wait for toys of the robots and hope they light up!

Another reference to “The Promised Land” in this episode, so besides Missy (Michelle Gomez) we have a through line for this season.

Next week, monsters under the bed! Can’t wait. Time to get behind the couch again kiddies!