The actor also talks WE ARE ANGELS, FAVORITE FIVE and LOOKING FOR LIONS 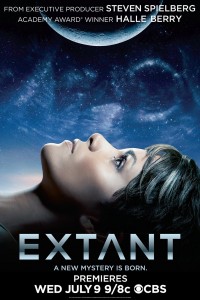 In EXTANT, CBS Wednesday nights at 10, Halle Berry stars as astronaut Molly Woods. Molly is astonished to discover that she has somehow become pregnant during a thirteen-month solo space expedition. When her child is born relatively soon after she returns to Earth, Molly and her family flee, with many interested parties in pursuit.

Eme Ikwaukor (pronounced Ik-walker) plays the commander of a Black Ops unit sent to track down Molly and her baby. It’s a good year for Ikwaukor – he also scored guest roles on CASTLE and HAIWAII FIVE-0 and is in two upcoming feature films, MY FAVORITE FIVE and LOOKING FOR LIONS.

In a telephone conversation, the Colorado-born actor, who also writes, directs and produces, talks about all of his gigs.

ASSIGNMENT X: How did you become involved with EXTANT?

EME IKWAUKOR: Two or three weeks before I got the role in EXTANT, I was actually working a day job. I [had acted in] this short film called CHANCE, and it’s about this guy who meets this girl downtown and they go through this entire night and you realize at the very end that it never actually happened. What it made me realize was that I just wasn’t pushing my career as much as I needed to be, because I was working a day job. So then what I decided to do was completely quit my job without any savings at all and dove one hundred percent into acting. And I realized that right after that, in the first two, three weeks, I booked three gigs within one week, and one of them was EXTANT.

AX: Halle Berry is not only the star but one of EXTANT’s executive producers. What was she like?

IKWAUKOR: She’s very humble, she’s very kind. We had a few conversations and she was just extremely kind. Every time I was on set, she made it, “Why don’t you just come up and say hi?” and was very warm and respectful. She was a great human being.

[Also], I got to work with Lou Gossett Jr., a guy who got me excited to be an actor in general just from his work, which was a real thrill to be a part of.

AX: What’s the most physically challenging thing you’ve gotten to do on the show in terms of being the Black Ops commander?

IKWAUKOR: There is running, but a lot of it is just being in heavy tactical gear and handling the weapons that I had. It’s a thrill, because the very first scene that I appear in, I’m going inside the house and searching all over, trying to find Molly and her family, which was really fun, and then we had a scene in the woods, up in Griffith Park. I think just being in that gear really has a thrill element that’s already attached to it, just wearing it in general.

AX: You had to run around in the heavy gear in this heat?

IKWAUKOR: A lot of times we shot, it was in the studio. The studio really wasn’t hot at all. And then we were up in Griffith Park at night, which wasn’t bad, and then we were down at the beach. So every day that I was on it, it wasn’t too hot.

AX: Did you have to go through any special training to play a Black Ops commander?

IKWAUKOR: No, I’d actually done a lot of military types, and I’d had previous fight training as well, and I was also doing weapons training with a buddy who was military. Most of the roles that I take have a physicality to them, so I’ve gotten training throughout the years, since back in college, in doing fight training.

AX: Are these physical roles the kind you like to play, or are these the roles you happen to be getting?

IKWAUKOR: No, I love it. I grew up with sports, so I kind of think of these roles as the closest thing to sports for me, and being very, very active, learning a new scene in terms of weapons training or fight training, I just love these types of roles, especially people in power.

IKWAUKOR: I also enjoy these different roles where you have a character who’s all alone. I guess with of roles where I have to be subordinate, that doesn’t actually happen. Literally, almost all the roles that I play, I’m in some type of position of power, whether it’s a SWAT agent or a cop or anything, almost everything that I’ve played is in a position of power.

AX: Is there something you do as an actor to get the actors around you to respond to that power, or is that just done by the script?

IKWAUKOR: I think you have to be confident in who you are as an individual. With people in power, it’s usually just part of them. I’ve always been a guy who wants to be looked at as a leader. Even back in college, I was involved in athletics, I was a mentor for athletes that I was working with. Same thing with acting – in college, I was part of a troupe as well, I was mentoring as well. I think it’s just always been following me, ever since I’ve been around [laughs]. It’s just always there. Playing someone that does not have a position of power would be different for me.

IKWAUKOR: Yeah. I’m always down for exploring and going to different places in regards to my acting that I haven’t ventured before.

AX: What sports did you play originally?

IKWAUKOR: I did mainly football and track. I was a jumper in high school, and then got into college through jumping as well and was training to be a decathlete, and then in football, I was a free safety.

AX: How did you get from that into acting?

IKWAUKOR: I actually finished doing sports, and I remember right after I was done in college, I went up to my advisor – it was actually the only time that I had actually gone to my advisor – and she told me, “You should try acting.” [laughs] I’d never really done it before, because I was looking at going into sports marketing, and she was telling me that, with acting, you can help pitch yourself in meetings. I went out to a party that night, I met a girl, and I asked her what she did. She said she was a theatre major, and then she asked me what was my major. “I am a theatre major as well.” Then the next day, I declared my major as a theatre major, and then around that time, I got cast in TO KILL A MOCKINGBIRD in the role of Tom Robinson, and I was involved with some very skilled and experienced cast, and because of that experience, I was like, “I don’t care about sports marketing any more, I just want to concentrate on acting.” That was how it started.

I wasn’t even looking at acting as an option when I got out of sports. I thought I was going to do something in regards to sports my entire life. Chance meetings happened that turned me on to acting. I’ve never had a chance to look back. And then I was in a theatre troupe at the University of Colorado, Theatre for Social Change, and that I could say, hands down, made me push so much stronger in regards to my acting career, because of just the format. I realized that acting – if you can do it a certain way, it could change a perception of how other people look at other people, that you could actually use it for a system for change.

AX: Did the Theatre for Social Change tour in the schools, or …?

IKWAUKOR: We went all over. We started on the campus, but then we were able to stretch out to literally anyone who was interested in the truth. I even did one out here, about a year ago. Even though I graduated, I’m still involved with that troupe out in California. We’re basically trying to take it to wherever, really. There are other [branches of Theatre for Social Change] in other states. They have other similar ones here and down South as well.

AX: And they perform works that are about social issues?

IKWAUKOR: Exactly, like homophobia or racism, discrimination, ageism – any issue you could think of, we tackle, and if there’s a certain situation that would happen on campus, there’d be a scene that would be around that idea.

AX: What were the other two jobs you booked around the same time as EXTANT?

IKWAUKOR: The other two were CASTLE and HAWAII FIVE-0. They already aired.

AX: With HAWAII FIVE-0, how was working in Hawaii?

IKWAUKOR: They were completely first class. I remember when I flew out there, I was like, “Hey, I’m here, what do you want me to do?” They were like, “Just go to the beach for the day.” And it was such a great experience. They fly you out first class, you’re there first class, and you’re just around such a very chill environment down in Hawaii, around such talented people. It was [a major] experience of my life, going to Hawaii and shooting. It was a dream come true.

AX: You’re also involved in a Web series called WE ARE ANGELS. Do you play an angel?

IKWAUKOR: I do. You look at me and you’re not sure if I am good or if I am bad. It’s actually kind of a cool idea, because in the show, you’re looking at these angels – each one of these angels is also flawed. They’re not these perfect beings.

AX: Did you draw on anything new to play a supernatural being

IKWAUKOR: I actually played a character in a movie called INK. INK dealt with forces that come out and give you dreams – some give you good dreams and some give you nightmares. They’re fighting over one man’s soul. The character that I played was a good guy, so I drew a lot of similarities between that role and [the one in WE ARE ANGELS]. You just have to be suave [laughs].

AX: What is LOOKING FOR LIONS?

IKWAUKOR: That movie is about the world of the black-market organ trade, and I played a leader of a group involved with dealing with the organs. Again, it was a role where I was playing a position of power. It was cool, because he had a very manipulative sense to him. He is a guy that, on the surface, he is a businessman looking out for what’s right. There aren’t really any bad characters – everybody is just trying to do what they feel is right at the end of the day. At the end of the day, every single one of them is screwed.

AX: You were also in MY FAVORITE FIVE …

IKWAUKOR: That was a romantic comedy. I actually played the role of the hopeless romantic. It was a lot of fun to work on. Basically, the idea is, there’s a girl who can’t find one guy who she likes, can’t come up with [all of the desired] qualities in one guy, so she separates it out to five guys she can get individual things from. [Ikwaukor’s character] was a little flowery, which was great, he was a little heightened. I liked it, because he was a little more sensitive [than many of the actor’s other roles].

AX: Is there anything else you’d like to say about your work on EXTANT?

IKWAUKOR: Yeah. I think just in terms of working on the show, it was such a great experience, because you’re around so many talented people putting across such an ambitious project. They assembled such an amazing team to tell such an amazing story.