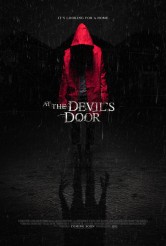 Movie Review: AT THE DEVIL’S DOOR

Creepy as hell, though not deeply plotted

Nicholas McCarthy, writer/director of AT THE DEVIL’S DOOR, clearly knows his scares. Whether it’s the slam of a drawer or the appearance of a shape in the mirror, he demonstrates a gift for doing whatever it is at just the right moment for just the right duration to make even pretty horror-hardened viewers jump. The result is a movie that generates intense dread, even though its plot is a bit short on cause and effect.

In a way, AT THE DEVIL’S DOOR is structured a bit like JU-ON and THE GRUDGE, with a migratory curse. When young Hannah (Ashley Rickard) unwisely agrees to “play a game” with her boyfriend’s uncle for $500, it’s not the type of sleazy interaction we might expect, but the results are much worse and last much longer. The fallout winds up encompassing diligent real estate agent Leigh (Catalina Sandino Moreno) and her artist sister Vera (Naya Rivera).

Making Leigh a real estate agent is a smart move, as it provides an answer to the oft-asked horror movie question of why someone is walking around a creepy empty house – it’s her job. With Vera and Hannah, there’s less motivation; we especially don’t understand why the heck Hannah complies with one of the uncle’s directives once it’s evident that the game is a bad idea.

Additionally, there are only the most basic threads keeping the whole enterprise together, especially when it comes to the timeline at the end of the film in terms of when and why a main character comes to a pivotal decision.

However, since it seems that explanations, plot development and character expansion have all been pared down to make more room for atmosphere and terror, we can’t complain too much. Filmmakers who feel obligated to maintain the structure of a regular movie when all they really want to do is get to the next frightening sequence have a tendency to resort to clichés or just plain old boring place holders.

McCarthy doesn’t do that. He is clearly preoccupied with mood and fear, and he and his able cast succeed in producing both at a steady, commendable pace.

Moreno stands out with a thoughtful performance, and Rivera likewise gives a sense of inner life to her cranky artist. Rickard, who has perhaps the trickiest job, makes us believe in Hannah’s innocence. Michael Massee effectively underplays the uncle and Tara Buck (unrecognizable here from her TRUE BLOOD gig as Ginger) is fine in a smallish role.

AT THE DEVIL’S DOOR is not a horror movie that has much splatter, dialogue or, when taking the long view, originality. What it does have is real horror, which is the element most required here.