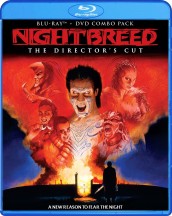 There are many instances where a director’s work is completely butchered by a studio because they don’t quite understand or care about the intent – they just want to make a quick buck and screw the art.

Sergio Leone had his 1984 epic ONCE UPON A TIME IN AMERICA sliced to a nub during its original release, only to be restored to its full epic glory decades later. Clive Barker’s NIGHTBREED from 1990 is the equivalent in the horror world.

Coming off helming 1987’s successful HELLRAISER (based on his novella “The Hellbound Heart”), Barker was given an unprecedented directorial opportunity – a large budget to see his CABAL novel translated into a big studio film. The end result was NIGHTBREED – about the world of monsters disrupted by horrible humans. In 1990, shortly before its release, 20th Century got cold feet and took the epic tale, truncated it down to a somewhat incomprehensible mess (without Barker’s help) and tried to sell it as a slasher movie.

For the FANGORIA crowd at the time, the entire year before it was released, the magazine treated readers to sneak peak photos and teases of what this epic movie would and could have been. The monster creations were unprecedented. I don’t think there’s a single other horror film that created so many different monsters that could, in their own right, support films of their own. The work on the film was that good.

And then the truncated movie hit theaters and horror fans watched it and then left the theater feeling cold, betrayed and confused at what had just happened.

At the time, reshoots, recuts – all that stuff was kept pretty quiet only to be revealed after the movie was released. So this sacrilege truly hurt Barker’s work and only enhanced some of the occasionally stilted performances and made the storyline completely confusing.

The thing is – Barker knew what he was doing. He made an epic movie. He had the footage, the performances and the creatures – the studio acted out of fear and didn’t know what they had and totally messed it up.

In the intervening years, a fan made CABAL CUT was created that was built off of old VHS workprint copies. Rumors that the original negatives were lost plagued any attempt to restore the film. And this was a horror movie and not Sergio Leone, so to get a studio to support such a painstaking and expensive prospect was not in the cards.

Then Mark Allan Miller who is part of Barker’s Seraphim Films, took the project under his wings and started inquiring about the missing footage and quite surprisingly, it was easier to find it than expected.

With Shout! Factory making a name for themselves by reissuing classic horror movies with successful results, they enabled a NIGHTBREED – THE DIRECTOR’S CUT to come to fruition.

Clocking in at 20 minutes longer than the theatrical cut (and shorter than the lengthy CABAL cut) and featuring about twenty minutes of alternate or adjusted footage, this new vision of NIGHTBREED is a triumph on so many levels.

Yes, the movie is as great and original as was initially promised and now, all these years later we can finally see what Clive Barker had intended.

First off, I’m not going to sugarcoat that NIGHTBREED is not without its flaws. Some of the sets feel cramped and small at times, and Craig Sheffer was perhaps not the perfect choice for nuance when it came to our hero Boone. And here comes some heresy – I always felt David Cronenberg (yes the director) playing the lead human villain was a little cold for my tastes. He looks fantastic whenever he’s on screen, but he’s a director, not an actor and it sometimes proves to be distracting in both incarnations of the film.

That said, Cronenberg, who was brought to the forefront in the theatrical cut, is more part of the ensemble in the Director’s Cut. So that complaint is remedied a bit.

Clive Barker’s NIGHTBREED, both in 1990 and in this 2014 Director’s Cut, is a revelation. I had not watched the film in twenty years, so viewing this new version was with fresh eyes. I didn’t remember the trajectory of the original (only knowing I didn’t like it), so it was as if I were experiencing the movie for the first time.

With horror so stale, boring and predictable in the 2014 landscape, NIGHTBREED is a bold world – one that defies expectations and really creates a world that will never be replicated on film again.

The story follows Boone (Sheffer). He’s plagued by nightmares of a place called Midian where the monsters live. His doctor, Decker (Cronenberg), has been trying to help him, but he has ulterior motives. Even though he pretends to not believe him, he secretly knows Midian exists and he wants Boone to take him there so he can essentially destroy all monsters. Decker also has a nasty problem of killing people – he’s a creepy serial killer, one of the creepiest committed to film since Michael Myers and he pins the murders on Boone.

The movie culminates with a human vs. monster battle – with the humans as the bad guys. It’s a nice twist and befits the film. In the new version the battle is every bit as epic as it should have been in 1990. Thank goodness for the restoration.

The thing that really comes across with The Director’s Cut is how inviting NIGHTBREED is now. There is character development, there’s a mystery, there’s a flow. Plop the Blu-ray in and you can’t take your eyes off of it. It slowly sucks you into its bizarre perverse world, much like Barker’s HELLRAISER and even LORD OF ILLUSIONS (which followed afterward).

The love story between Boone and Lori is more pronounced as well. We see why he cares for her and her for him. It’s a much better way to anchor the film because the theatrical cut made it feel really disconnected and false.

There are so many fascinating things that populate NIGHTBREED, including some great monster supporting characters but a stand out Is Hugh Ross as Narcisse. The actor is pitch perfect. He’s a great breath of comic relief and a character you fall immediately in love with. It’s one thing you can’t really argue with the studio at the time – demanding reshoots to keep that character alive. The director’s cut keeps the original intent (he’s killed), and it works that way too.

The Director’s Cut also ceremoniously restores Pinhead actor Doug Bradley’s voice to his character of Lylesberg. It’s revealed in the special features that the studio likely didn’t want to fly Bradley to Los Angeles for looping because of budget concerns, so they replaced his voice with someone else that kind of butchered the part. Now Bradley is Bradley again. Thank you Shout! Factory.

Visually, NIGHTBREED is gorgeous to look at it. The only thing that dates it are a few interior scenes early on that feel a little too music video inspired and the underground Midian sets which at times feel like sets. Still, I like the organic nature of it versus a big CGI environment, so it makes it feel almost more real than what a modern film might have done. Imagine a Peter Jackson CGI Midian. It really wouldn’t do it justice. This feels almost just right.

The special features include a one-hour plus documentary on the inception of NIGHTBREED and the subsequent post-production problems. It also features tons of behind the scenes footage including some taken from the newly discovered footage. You get a candid glimpse of the various alternate takes are, not to mention right before and after “action” and “cut” were called. It’s really fascinating  stuff and a great documentary feature throughout – especially with everyone talking so candidly and reverentially about the film.

Everyone is here with new interviews including Sheffer, Bobby and most of the key supporting cast. Barker on the other hand isn’t represented in the flesh other than an introduction to the movie itself with Miller. His big presence is felt in a great audio commentary with Miller. We get even more in depth to what happened during the making of the film and the changes that were made. It’s a great addition to the Blu-ray. Also included is a special feature on the make-up and one on the second unit photography.

For those that want to spent more money for the Limited Edition Blu-ray, you get an additional two discs – one filled with more special features and the other a brand new transfer of the Theatrical Cut.

That said, I doubt anyone will want to revisit the Theatrical Cut other than as a curiosity item. The real NIGHTBREED is here in the Director’s Cut. It is the only way to fully experience Clive Barker’s unique world and soon, the Theatrical Cut will feel just like a dream, much like the Normal World faded away for Boone in the movie.

Get the Director’s Cut and watch a bold new (old) horror movie unlike anything you’ve ever seen. It’s a shame Barker doesn’t direct anymore, but honestly, I don’t think anyone would ever let him get away with what he did here again, and if they did, the end result would probably be destroyed (again) by the production company working with him anyway. Barker is a unique talent and his film contributions as a director are now flawless. He is an author at heart and his worlds continue to be created in a place where he has creative control. I do have to admit, after what happened the NIGHTBREED, it’s shocking he ever directed again, but he jumped into LORD OF ILLUSIONS and that was his final cinematic masterpiece.

Thank you Shout! Factory and thank you to Barker and Miller for restoring NIGHTBREED to its glory and giving the fans the movie they so dearly wanted and needed. Twenty-four years is a long time, but it was honestly well worth the wait.