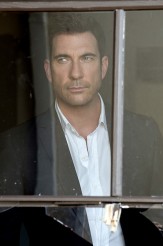 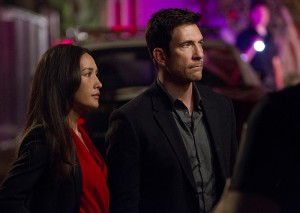 Kevin Williamson, who created the SCREAM franchise, DAWSON’S CREEK and THE FOLLOWING, as well as adapting THE VAMPIRE DIARIES for TV, has now brought forth STALKER. The new CBS series, Wednesdays at 10 PM, follows LAPD’s Threat Assessment Unit (based on the real LAPD Threat Management Unit), particularly Detective Beth Davis, played by Maggie Q, and her new partner Jack Larsen, portrayed by Dylan McDermott. Their job is to investigate and evaluate cases where someone is being stalked and to take the appropriate action to protect the person. Beth is initially wary of Jack, not least because Jack has followed his ex across the country in what could possibly be construed as a stalking situation.

Creator/executive producer Williamson is at a party thrown by CBS for the Television Critics Association, where he talks about his new show.

ASSIGNMENT X: Although the two series are not the same, there are some similarities between STALKER and CRIMINAL MINDS – STALKER airs directly after CRIMINAL MINDS. Did CBS come to you and say something like, “Do you have anything that might be a companion piece for CRIMINAL MINDS?”

AX: In the pilot, there’s some ambiguity about how Jack is handling the situation with his ex because he wants to see their child. Does that ambiguity continue, and will the cases of the week sometimes have that ambiguity?

WILLIAMSON: Yes, exactly. That’s exactly what we’re trying to do. I think what’s happening with Jack, Dylan’s character is, I want to show the kernel of the obsession, what is going on. In the pilot, we give the first reveal. There’s more reveals to come with that storyline. We can all be stalkers. We’ve all stalked someone at one time. How many times have we broken up with someone when we were young and we had to ride by their house just to see who was parked in the driveway? You’re stalking. When do you cross the line? When do you instill fear into a victim? That’s when it becomes a crime. I think that’s why it was fun to explore in his character, and the same in Beth’s character. We’re going to see the anatomy of a stalker as well, and see how the obsession begins and how the fixation takes root and how it imbeds. And one of the things I’ve discovered is, a lot of these detectives that work in this unit have been stalked. There is something that has brought them to this unit, and that is, I think, something really nice to explore.

AX: Does the ambiguity with Jack’s character ever go so far as condoning the stalking behavior?

WILLIAMSON: No. In the show, he does not cross the line. I just don’t want to give up all the spoilers. He is there because he wants to change his life. He wants to be a better man. We have a bunch of surprises coming for his character.

AX: You’ve written a lot of stalking behavior in SCREAM and THE VAMPIRE DIARIES and THE FOLLOWING. Are you using anything you learned about writing stalking on those projects in this show?

WILLIAMSON: Well, in a weird way, I guess I would have used this on those shows, so – I’ve been researching this show for a really, really long time. I live in this genre, I love this genre, I really enjoy writing the genre, scary and macabre, and so you learn a few things – everything you do is very helpful to the next thing. I’m learning as I go, I’m a work in progress.

AX: Are there any things that you’re steering away from in STALKER because they’d be too similar to THE FOLLOWING?

WILLIAMSON: Yeah. I mean, it doesn’t carry the violence of THE FOLLOWING, but I think a lot of people, fairly, watch the opening scene of the pilot and go, “This is a big, violent show.” But really, other than that, it’s a tamer version. It’s a tamed-down show, regardless of – it’s subjective of what we find to be tame or not, I guess [laughs], but anyway, I find it’s a cop procedural. It’s a case of the week, it’s not a serialized show. I think that alone is a big difference.

AX: Maggie Q just finished multiple seasons as the lead in NIKITA. For some viewers, she’s so associated with being tough that do you have any concerns about situations where her character is supposed to be physically scared?

WILLIAMSON: It’s true. She’s a tough woman. But you know what? She gets scared, too. She does great. She’s been scared, she plays vulnerability really well. I think sometimes the best vulnerability can be revealed through a very cold wall.

AX: In the STALKER pilot, there’s a sequence where the shadows of someone walking past in the hallway appear in the space below a closed bedroom door. Is that thing with the shadow under the door one of your phobias?

AX: How are you handling the scheduling between STALKER and THE FOLLOWING? Have you handed THE FOLLOWING over to a show runner, or are you splitting your schedule? And are any of the actors whose characters died on THE FOLLOWING likely to show up on STALKER, like for instance Valorie Curry?

WILLIAMSON: Well, I love Valorie Curry. She can do anything she wants to in my life. Jen Johnson is now doing the day to day on THE FOLLOWING. I’m still involved, I talk to her all the time. But my day to day is on this show [STALKER], and this is the focus of my daily twenty hours of work. Jen is handling all the show-running duties on THE FOLLOWING. She’s doing a great job. We’ve got a really great season planned.

AX: Are you doing as many shows as you can handle right now? Is this as many plates as you can juggle, or once you get this plate spinning, are you developing another show?

AX: Do you have any desire or plans to direct?

WILLIAMSON: Yeah. I want to direct a movie, and so I’m going to write a movie that I can hopefully direct, that’s my plan.

AX: Is there anything else you’d like to say about STALKER right now?

WILLIAMSON: Just that I think it’s a fun, entertaining show and it’s a unique twist on a cop drama, with a lot of cool characters and some fabulous cast. I’ve got a great cast. And it’s really exciting to be on CBS. I’m happy. It’s a good time.