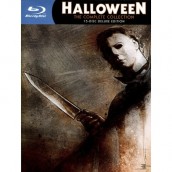 An unprecedented, awesome box set corralling all 10 Halloween films in one set with the long-awaited HALLOWEEN 6 Producer’s Cut restored 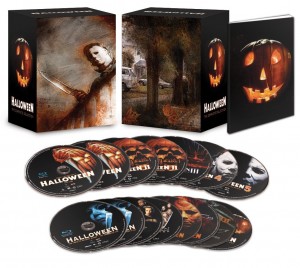 The significance of HALLOWEEN: THE COMPLETE COLLECTION LIMITED EDITION, which brings together all 10 films under once roof, is not lost among die-hard films.

The rights issues for the ten films spans several different companies and many different licensees which has made a box set like this seem more like a pipe dream in the past than a reality.

And this wasn’t some willy-nilly half-assed affair like last year’s FRIDAY THE 13th box set that offered nothing new even though it had both the Paramount and Warner Bros./New Line produced films contained in one box.

No, this was careful, strategic planning that not only brought brand new special features to the table, but also includes a fully restored Producer’s Cut of the long-bootlegged original version of HALLOWEEN 6. Sure, some of the hard work was previously done with the Shout! HALLOWEEN II and III reissues from last year and Anchor Bay’s remastered HALLOWEEN from last year, but for those who gave up trying own every home video iteration of these classics can now have everything in one nicely packaged box set.

That said, purists may argue that there are two glaring omissions – the theatrical cuts of Rob Zombie’s HALLOWEEN remake and its sequel HALLOWEEN II, but those are minor quibbles that can be debated another day (especially, if you’re like me and already own them).

As a series, HALLOWEEN, like FRIDAY THE 13th and A NIGHTMARE ON ELM STREET, has been wildly uneven. And with movies spanning four decades, the HALLOWEEN sequels tended to reflect growing trends in horror at the time of their creation rather than staying true to the creepy origins of the original 1978 John Carpenter classic.

Here’s a rundown on the films and special features: 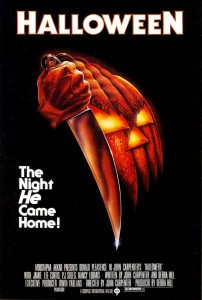 HALLOWEEN (1978) stands as one of the greatest horror movies of all time and one of John Carpenter’s best. It’s spooky, scary and with the minimal budget truly kicked off the slasher movie genre that lasted into the early 1980s. He created a minimalist killer with very little back-story. Michael Myers will always be the embodiment of the boogeyman and this film cements that as he pursues babysitter Laurie Strode (Jamie Lee Curtis) and butchers all her friends. Tracking Michael down is his diligent psychiatrist Sam Loomis (Donald Pleasence) who is fully aware the true evil that Myers is. The film is also aided by Carpenter’s expert use of widescreen courtesy of superb cinematography by Dean Cundey. 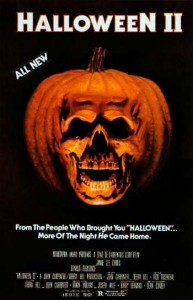 HALLOWEEN II (1981) picked up where the original left off and tried to retcon the mythology a bit by adding in the big surprise that Laurie Strode was actually Myers sister – hence, he had to kill another one of his siblings. Most of the film takes place at the strangely abandoned hospital (despite the fact the hospital is supposed to be a functioning hospital) and even though Rick Rosenthal took over the directing reigns from Carpenter, Carpenter’s fingerprints are still all over this (he co-wrote the script with Hill, did some reshoots and did the score with longtime collaborator Alan Howarth). HALLOWEEN II does suffer from an over-reliance on intense violence and gore, something that was a slasher movie trope in 1981, but I’ve always been partial to this being the best of the sequels because it feels very much a perfect pairing with the original. 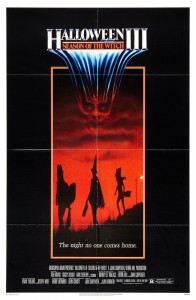 HALLOWEEN III: SEASON OF THE WITCH (1982) is a polarizing movie since it doesn’t feature Myers and was an attempt to do an annual Halloween anthology movie instead or continuing with the serial killer motif. It failed at the boxoffice and with many fans, but from the first time I saw the film, I loved it. It’s refreshing, different, bizarre and still manages to capture the small town creepiness of the first two movies (Carpenter and long-time collaborator Alan Howarth provide an equally atmospheric score).  The plot focuses on a mad mask maker hoping to bring Halloween back to its Druid roots and features Tom Atkins as a doctor who unravels this mystery. Original, spooky and more science-fiction than horror, writer-director Tommy Lee Wallace (with assist from uncredited Nigel Kneale) create a lasting, creepy Halloween film, that many continue feel would have fared better if it was just called SEASON OF THE WITCH instead of HALLOWEEN. Watch it again on its own merits, you will relish in its misunderstood greatness. 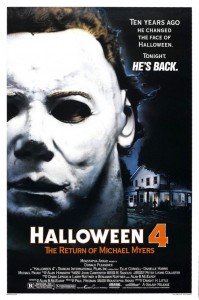 HALLOWEEN IV: THE RETURN OF MICHAEL MYERS (1988) is an uneven mess that starts off strong, but falls apart by the end. It’s aged much better than it should have still containing a slight spirit of the original films, but the whole notion of Myers still going after family members was getting strained at this point. Laurie Strode’s daughter Jamie (Danielle Harris) is the new target and Myers returns home for more bloodshed. 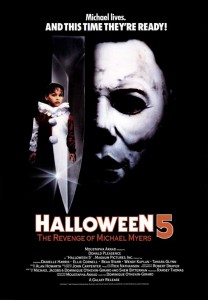 HALLOWEEN V: THE REVENGE OF MICHAEL MYERS (1989) is a continuation of IV and still featuring Jamie, but the magic had worn out its welcome at this point despite some clever suspense moments. 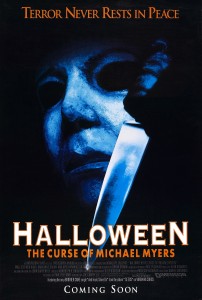 HALLOWEEN: THE CURSE OF MICHAEL MYERS (1995) contains both the dreadful theatrical cut and the brand new remastered Producer’s Cut. Another polarizing entry in the series, as it decides to retcon the mythology even further by adding the idea that Druids were responsible for turning Myers into the evil entity he became instead of him just being evil. I hate to think of Myers as neutered and being controlled by others so both versions of this movie are plagued by massive problems. The Theatrical cut is a travesty, honestly – uneven, choppy and also plagued by a terrible ending made of inconsistent reshoots and a tacked on moment that tries to wrap up Pleasence’s involvement with the franchise (since he passed away shortly before the film’s release). The Producer’s Cut is actually much better and makes more sense. In fact, despite some goofy stuff at the end with rune stones, the ending itself is photographed better and more complete than the hacked up version of the theatrical version. There are subtle differences throughout, but the flaws of the Producer’s Cut are far less annoying then the one’s shown in theatrical. The other saving grace is a young (and quite good) Paul Rudd as the hero – Tommy Jarvis (the kid in the first movie) is all grown up and discovering the secrets of who and what Myers actually is. The Theatrical cut is actually from the original DVD, so it’s worth having the Producer’s Cut for a brand new remastering. The set is worth owning for this special feature alone. 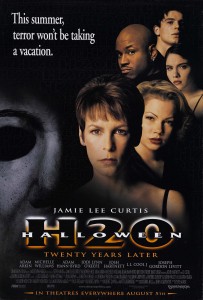 HALLOWEEN H20: 20 YEARS LATER (1998) was a major watershed moment since it brought Jamie Lee Curtis back to the franchise. With the SCREAM movies reinvigorating horror at the time it was made, HALLOWEEN got a late 1990s facelift too. It feels of its time, but it also brought HALLOWEEN back to some of its suspense roots. The opening teaser is actually very good and better than anything in IV, V and CURSE combined. It’s less about the gore and more about the misdirection which is what Carpenter did so well in the original. The film is not without its faults though and falls apart by the end. Still, it’s probably the most underated Michael Myers of the bunch (outside of HALLOWEEN III). 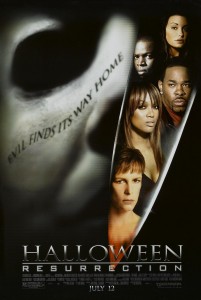 HALLOWEEN: RESURRECTION (2002) tries to go the quasi-found footage route (before it was fashionable and profitable) and brings back HALLOWEEN II director Rick Rosenthal, but the result is a travesty. It’s by far one of the worst of the HALLOWEEN movies and it’s a shame too, because it has that killer opening with Jamie Lee Curtis that finally wraps up the Laurie Strode saga in a nice little bow. 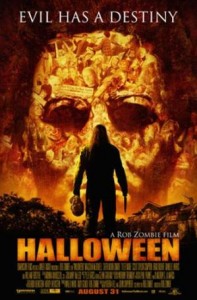 HALLOWEEN (2007) brought Rob Zombie to the franchise as writer-director and his task was not enviable – remaking/rebooting the original movie. Honestly, I would have rather seen a full-on reboot, rather he touch any key moments from the 1978 movie, but unfortunately that’s where this movie fails. The Director’s Cut features more of the moments of Myers at Smith’s Grove Sanitarium which is where the movie excels. These scenes with a young Michael and Loomis (Malcolm McDowell) are fantastic. It explores a part of the HALLOWEEN universe we haven’t seen before (and that many of us wanted to see). Once we get past that though, the movie introduces a brand new Laurie Strode (Scout Taylor-Compton) and it’s all down hill from there.  There are many problems with Zombie’s vision – namely the vulgar sensibility he brings to the early scenes where we discover Myers was made into a monster, not born one. That said, it’s better Zombie did his own take on the material then completely rehash the original, but I would have preferred an entirely new throughline and one that didn’t bring Laurie Strode into the mix, than try to come up with a 2007 version of her, but what’s done is done. At least he got McDowell as Loomis – probably the best reboot casting anyone could have hoped for. 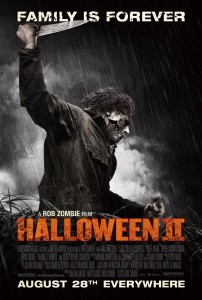 HALLOWEEN II (2009) is actually the better of the two Zombie films and lives up to the promise of the more original moments of his reboot. It’s a strange film, more arthouse than horror movie and it’s actually pretty great in spots. It follows Myers as he goes after Strode again, but the movie is moodier, grittier and more original because it creates the franchise wholly in Zombie’s image. I wish Zombie would have created a few likable supporting characters that didn’t make you want to see them die the moment they came on screen, but oh well. He gets hung up on a hillbilly mentality with all of his characters at times, and it’s perplexing when he clearly has the directorial chops to create something other than the style he is known for with the DEVIL’S REJECTS / HOUSE OF A 1000 CORPSES movies.

The final disc on the set is filled with additional special features and HALLOWEEN: THE EXTENDED CUT which takes Carpenter’s original 1978 film and adds back in the scenes from the TV version. Carpenter shot new footage for the TV version when HALLOWEEN II was being filmed and this is integrated pretty seamlessly into the mix (widescreen and all). It’s standard def, so there’s a slight dip in quality, but honestly, you will hardly notice. It’s a fun way to revisit the film in an alternate form.

Overall, HALLOWEEN is still a viable franchise, plagued by problems of neglect and bad decisions. It’s not perfect, but any series that has 10 films in its canon, there’s bound to be some unevenness.

Where HALLOWEEN will go from here is a mystery, but I hope at some point it finally gets back to the small town creepy charm of the original Carpenter films and transforms Myers back into the unstoppable and scary boogeyman he was always intended to be. Maybe another reboot is in order, but it will take some time before all the rights holders can figure out what they want to do. It’s a miracle they were able to allow this box set to happen, so in lieu of any more movies, this is a perfect placeholder until Myers inevitably comes back home again.