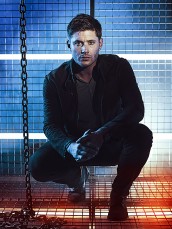 The actor talks directing and that BRAVEHEART speech 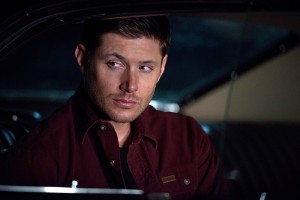 SUPERNATURAL is now in its tenth season, Tuesdays at 9 PM on The CW. Created by Eric Kripke and now show-run by Jeremy Carver, the series follows brothers Dean and Sam Winchester, played respectively by Jensen Ackles and Jared Padalecki, as they engage in the family business of fighting monsters and the forces of Hell, Heaven and any other nastiness in between. At the end of Season 9, Dean died and then revived with a demon inside him, courtesy of the Mark of Cain. Season 10 begins with Sam trying to find his brother, who is currently hanging out with Crowley, aka the King of Hell, played by Mark A. Sheppard.

SUPERNATURAL has the courage of its own insanity, an intensely loyal and large fan base and – to judge by what is said on a panel with Ackles, Padalecki and Carver that The CW holds for the Television Critics Association – the continued enthusiasm of the people who make it.

Ackles, a native Texan, previously had recurring roles on DAYS OF OUR LIVES, DARK ANGEL, DAWSON’S CREEK and SMALLVILLE before taking on the wisecracking Winchester. Since 2010, he’s also been directing some episodes of SUPERNATURAL, most recently Season 10’s “Soul Survivor,” which airs October 21.

Following the Q&A panel, Ackles remains to answer some follow-up questions, including how it is that his “Soul Survivor” both is and is not the first episode of Season 10.

JENSEN ACKLES: It’s not the season premiere. It will air third, but it was the first one that we shot [for the season]. They basically did me a very nice favor in moving the episode that I’m directing to the first one to be filmed, so that I could prep without actually having to act in another episode. Because otherwise, I’d have to be working on Episode Two as an actor, trying to prep for Episode Three as a director, and that would be very, very difficult. So they bumped mine up to the front of the list to allow me to come back a little early from my hiatus, do the prep, do the shoot, and now, we’re actually starting our season premiere today [the day of the Q&A], which they kindly wrote Jared and I out of the first day, so we could come and spend the day with [the Television Critics Association].

AX: After recurring on SUPERNATURAL since Season 5, Mark Sheppard is now a regular this season. Did the show discover it just couldn’t live without him, or …?

ACKLES: I think it’s just simply the beginning of an end [laughs]. No, he’s on as a contract player now, we’ve got Misha [Collins, who plays the angel Castiel] fully contracted now, and I couldn’t be more excited. Personally, I think it’s something we probably could have done a couple years ago, because I think that they are integral to the story and to the boys’ moving forward. It definitely is going to make for some interesting storylines and arcs this year, having them both available to us full-time. We’re not going to be having to share Mark with another series or having to share Misha with something else, so the fact that they’re both on full-time is welcome to us.

AX: Do you have a favorite moment in the ten years of SUPERNATURAL?

ACKLES: My favorite moment? That’s virtually an impossible question to answer [laughs]. There have been many, many moments. I would say personally, it was probably a toss-up between marrying my wife [actress Danneel Harris] and having our daughter. Professionally, it is a collection of amazing events. I truly do get along with Jared as well as anyone could ever hope to get along with a co-worker, and that really makes for just a fun place to work. We laugh with our camera crew, we laugh with our sound guys, with our props department, with our electrics and grips and everybody, and it’s just one happy, dysfunctional family. And I think that the fact that we have these relationships is probably the greatest thing that’s happened to me since the start of the show.

AX: In the episode “LARP and the Real Girl,” you delivered a climactic monologue from BRAVEHEART, which Dean as a character knew by heart. Was that speech actually something you’ve been saving up throughout your life?

ACKLES: Unfortunately, I knew that monologue start to finish before the script was ever written, so I don’t know if they knew that, but that’s always been a favorite movie of mine. So when I read the script, I got giddy with excitement.

AX: Do you ever go back and re-watch episodes?

ACKLES: Oddly enough, yeah. In preparing to direct the episode that I just directed, I went back and started picking off some episodes. I went back all the way to the pilot – I watched the pilot, I watched a couple more Season 1, I watched some Season 2, some of the big arc shows, the big ones – not the one-offs, but the ones that really move the mythology of the story along. Really, I know what they were about, I was there when we were doing them, but I just wanted to get kind of fired up again. And it inspires me to go back and see how far we’ve come and what we did when we were back then and how good – I mean, I remember calling Jared after I watched the pilot and he hadn’t even come back up to Vancouver yet, he was still on his hiatus, and I’m like, “Hey, man, I watched the pilot last night. It still holds up. Good job, man. I just called you to pat you on the back.” He was like, “Well, thanks!” And I’m like, “All right. Now get your ass up here, because we’ve got a show to shoot.”

AX: Which episodes have helped you the most as a director?

ACKLES: I love to watch [the late] Kim Manners’ episodes. He was a director who I thoroughly looked up to, both on and off the set. Also, Bob Singer has been an amazing mentor for me. And it’s not in like a certain style or a certain way – it’s really just in the small, little subtleties. Kim always preached that it’s in the nuances – the scene is in the nuances. You may not see it written right there on the page – it’s the stuff that’s between the lines that really makes a scene come to life. So I try to find that both as an actor and as a director. And Bob has the same sort of advice when it comes to that kind of stuff, and he also gives me really nice technical advice. “Drop back, use long lenses, use your focus, use your transitions to your advantage.” And so it really kind of was Film School 101 for me with these guys, and I couldn’t have asked for better teachers

AX: After all these years of playing monster-hunting Dean, what are your real-life thoughts about things that go bump in the night?

ACKLES: I would say that it has given me an incredible false sense of security, doing the show. [laughs] I hear something bumping go in the night, I’m like, “Well, I know what to do with whatever it is, so game on, pal.” Whether or not I ever face something supernatural has yet to be tested, but I have no qualms going downstairs to investigate, without any hesitation.

ACKLES: Well, [at the time of this interview] I’ve only had one episode to do it, and it was an episode I was directing, so my mind was a little scattered, but luckily, I was overly prepared as a director so that I was able to concentrate on the performance of Demon Dean, and it was fun for this episode, but the next two episodes I believe are going to be even more entertaining.

ACKLES: Yes. I would say it’s ramped up to a very high, yes, truly devil-may-care. We’ll see how that plays out. Hopefully it comes across right.

AX: If you could write Dean’s end, what would it be?

ACKLES: Oh, gosh. The end is, like Jeremy said, still up in the air. They have an idea, I have some ideas – I have dreams about the way the show is going to end. So I try to log all that and try to keep it contained, because I don’t want to have any expectations just yet. I still get wowed when I read these guys’ scripts, I still get excited, I still get inspired, and I never want that to change.

AX: Anything else you want to say about SUPERNATURAL right now?

ACKLES: It’s more thanks for keeping us in the game for ten years, to all of you guys, to our fans, to everybody. It is truly a job that we love and cherish. It’s a show that we love to work on, and it’s a story we still love to tell, so a deep thanks from the bottom of our hearts.