Supernatural review Do You Believe In Miracles Season 9

Okay, so did anyone see exactly that coming? 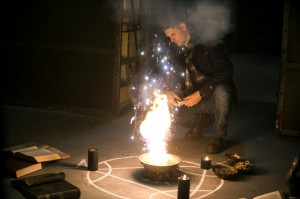 Jensen Ackles in SUPERNATURAL - Season 9 - "Do You Believe in Miracles?" | ©2014 The CW/Cate Cameron

SUPERNATURAL arguably hasn’t had a season finale quite as startling as Season 9’s “Do You Believe in Miracles?” since Castiel temporarily became a god and perhaps not since Sam (Jared Padalecki) got locked in Hell. Now, we should have seen this coming, but in all the chaos with trying to get Heaven out of the grasp of Metatron (Curtis Armstrong) and Hell out of the clutches of Abaddon, we and the Winchesters may be forgiven for putting a few salient facts temporarily out of mind.

After the traditional season-ending overture of “Carry On, Wayward Son” plays over the annual recap, we’re back to a horrified Sam and Castiel (Misha Collins) pulling a borderline rabid Dean (Jensen Ackles) off of Gadreel (Tahmoh Penikett). Dean has attacked Gadreel with the First Blade, but doesn’t succeed in killing the angel. Gadreel, however, runs for his life while Sam and Castiel lock Dean up for his own good.

When Sam and Cass catch up to Gadreel, they explain they don’t want to hurt him. Gadreel says that Metatron wants all of humanity. Meanwhile, Metatron uses tech-geek angel Neil (Shayn Solberg) to put out a message on Angel Radio that all angels in Heaven and on Earth can hear. He assures them he’s happy to have reopened Heaven for them and that they’ve accepted him as their new God, then goes to Earth to work some miracles – under the guise of a homeless man named Marv – to get humans to believe in him.

Stuck in his cell, Dean summons Crowley (Mark A. Sheppard), who frees him and lets him access the First Blade. Dean wants to kill Metatron –Crowley suggests they stop for a talk. Crowley explains that the First Blade makes its bearer homicidal – killing will make Dean feel better and not killing will make Dean feel so bad that he’ll eventually die. Dean ignores his cheeseburger.Crowley sees this as a sign something is wrong with Dean (so do we).

Castiel and Gadreel bluff their way into Heaven while “Marv” is on Earth, only to be thrown into angelic jail.

Meanwhile, Sam and Dean argue (what else is new?), but Sam says they’ll see this through together. Dean of course knocks Sam out before the big confrontation with Metatron.

The angel Hannah (Erica Carroll), who previously believed in Castiel, feels betrayed and doesn’t believe the truth, which is that Metatron tricked everyone and that the suicide bombers were his people. However, when Gadreel commits suicide to prove his sincerity, Hannah rethinks her position.

When Metatron and Dean confront one another, Metatron says that he’s going to give humanity what it wants – a God who is actively involved in their prayers and affairs (even though he has contempt for both humans and angels). Dean goes at Metatron and Sam regains consciousness in time to enter the fray, but Metatron succeeds in mortally wounding Dean.

The angel tablet has been sitting under Metatron’s prophetic typewriter. Castiel breaks it in order to save Dean. Metatron returns to Heaven and tells Cass he’s too late, Dean is dead, and then says some pretty derogatory things about the angels who’ve allowed Metatron to lead them. Bad move: Metatron didn’t realize he was live on angel radio. Metatron is thrown in angel jail and the angels look once more to Castiel to lead them, even though he says he’s no leader.

Dean is dying. Sam is in tears. Dean points out that Sam said he wouldn’t care if this happened. Sam says he lied. Yes, it’s taken all season, but beneath all of that resentment, Sam still loves his brother. So much, in fact, that after Dean dies, Sam tries to summon Crowley.

Crowley, however, is way ahead of Sam and appears in the other room with Dean’s body. It seems that Crowley didn’t mention to Dean, when he was urging the older Winchester brother to seek out the Mark of Cain and the First Blade, he neglected to mention that the Mark and the Blade refuse to give up the ghost even after death, which is what happened to Cain. We may now recall (though Crowley doesn’t mention it at this juncture) that Cain founded the Knights of Hell. Dean opens his eyes, which are a demonic black.

Well, that’s a new one. Yes, Dean got momentarily vamped and Sam was soulless for about half a season, but actively working for Crowley is going to put a wild spin on things going forward.

There are so many big satisfactions in this episode, from Sam finally getting back to his true fraternal feelings to the whole of angeldom realizing that Metatron is an evil d-bag to at last learning what the Mark actually does and even how the Typewriter of Prophey is powered. Even having Dean ignoring a cheeseburger as a harbinger of doom is a wonderfully SUPERNATURAL-specific touch.

Are we worried about what Dean will do and what Sam will do and what the hell will happen? Of course, that’s what we want in a cliffhanger. Are we happy with the news that Sheppard will be a regular next season? Absolutely – the actor has done yeoman work and enlivens all of his scenes; the more of him, the better. Are we glad that Season 10(!!!) is coming up in the fall? Bring it on, wayward son!