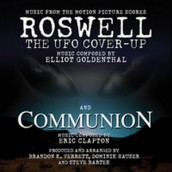 Alien abduction in the guitar key of Clapton

After respectably re-performing John Carpenter and Ennio Morricone’s THE THING,  Buysoundtrax now breaks the ice on two lesser-known “true life” alien scores, one involving the human probing done on some accidental visitors to ROSWELL, then playing a writer’s metaphysical close encounter for COMMUNION. Yet despite the role-reversals, both scores are tried together by a lyrical approach steeped in mystery, and a sense for peaceful understanding, even if that might not be the government’s aim for the first 1994 Showtime movie, which continued composer Elliot Goldenthal’s streak of memorable genre scores following PET SEMETARY, ALIEN 3 and DEMOLITION MAN. While taking the viewpoint of an army major seeking to find the truth out there, ROSWELL isn’t quite as strange as you’d expect from a composer who was impressing Hollywood with his Avant garde flourishes, though such trademarks as brassily churning rhythmic progression, mournful melody and eerie string passages are in abundance for a score that could easily work on an X-FILES episode. Intriguing and mostly low-key in conveying what still stands as the UFO conspiracy nut cause celebre, ROSWELL  has a creepy pace to it, even if the string emulations here are a bit too synthy-sounding for what was mostly a budgetarily-necessitated electronic soundtrack – though the very real voice of Nadani Sinha makes a torchy impression with the cleverly extended “I’m Still Here.”

A pseudo Eric Clapton is the shining star of COMMUNION, Philippe Mora’s provocative adaptation of Whitley Streiber’s “true” experience of being kidnapped by aliens (given a run for weirdness by star Christopher Walken). Helping to make the film both convincing, and intelligent whether one believed its premise or not was a beautiful, meditative score, whose improvised licks by rock guitar God Eric Clapton were given eerie backing by regular Mora composer Allan Zavod (THE HOWLING III). Given a psychedelic treatment that left Streiber’s experiences open to interpretation, Clapton’s electric, acoustical licks took on a mesmerizing, acid rock power, especially with nearly every cue centered around its beautiful, drifting theme. Like the best alien encounter scores, of which the brief, relatively unsung COMMUNION stands, Clapton helped communicate a sense of wonder of touching the great, cosmic unknown, with a trippy vibe as much about inner space as it is the outer limits. Though Clapton might not be playing here, Dominik Hauser does an exceptional job of emulating his raw, improvisational licks, with Steve Bartek doing a fine job of bringing out a peaceful, Zen groove for the score’s poetic end title. At the least, once can believe in this spot-on close encounter of COMMUNION‘s score.

Click on the link to Purchase the ROSWELL and COMMUNION soundtrack