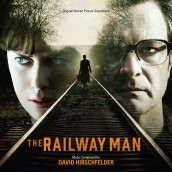 Davidhirschelder's powerful score tracks a path from barbarity to forgiveness

David Hirschfelder has long shown his talent for playing the sweep of historical drama from the darkly regal ELIZABETH to the epic saga of his homeland in AUSTRALIA. But he’s just as capable of hauntingly intimate, character-oriented scores, whether it’s solving the murder mystery behind THE WEIGHT OF WATER to helping a mentally drained pianist unlock the greatness within himself for SHINE. Hirschfelder’s abilities join like never before in tracking the path from atrocity to forgiveness with THE RAILWAY MAN, a devastatingly powerful, true-life film about a WW2 POW coming to terms with the atrocities visited on him and his comrades by the Japanese who enslave them to creating the Burmese railway. It’s a reckoning he must make before the past destroys him, a journey forward that Hirschfelder charts with moving subtlety, even as his anguished music revisits the past’s horrors that have grown to become too much too bear.

THE RAILWAY MAN begins innocently enough with the unlikely romance between a buttoned-down train watcher (Colin Firth) and an attractive schoolteacher (Nicole Kidman), their growing bond captured for all of its charm by a bucolic, classically-oriented strings and angelic bells – yet with a slightly strange choral quality that tells us something is amiss. As his growing present-day anger segues between flashbacks of barbaric treatment, Hirschfelder balances sad, tense orchestral rhythm with impactful symphonic statements that convey the awful, lashing weight of man’s inhumanity at its worst. It’s music that powerfully contrasts the outrage of POW treatment with one man’s desperate struggle to survive both in body and mind. Military timpani is pitted against Asian winds and percussion, creating a score constantly under Japanese guard, with the threat of dark punishment meted out at any moment. While it doesn’t take long before the niceties that Hirschfelder began with become a distant memory, the composer always keeps a melodic center within even the score’s most frightening moments, showing both war criminals and their victims affected by cruelty, emotion that’s no more powerful than when a Latin chorus, elegiac strings and tolling bells creates a biblical sense of humiliation and outrage.

Though THE RAILWAY MAN gets unbearably sad, healing is this score’s ultimate destination. To get there, Hirschfelder has created a truly beautiful main theme, one varied with slow moving strings and Japanese instruments to connect both Western and Eastern musical styles, inexorably linking both captive and regretful torturer to find peace within themselves. It’s a tremendously moving melody that’s elicits emotion without being obvious about it – the trademark of any great dramatic score that’s certain enough in its effectiveness to let the actors’ performances do the heavy lifting. One of the strongest films and soundtracks so far this year, THE RAILWAY MAN  is a work of exceptional, transformative soulfulness, building a melodic bridge of peace from hearing humanity at its worst.

Click on the link to Purchase the THE RAILWAY MAN soundtrack