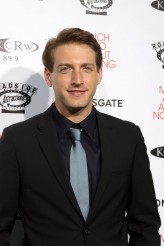 Exclusive Interview: Fran Kranz on THE LORD OF CATAN and more – PART 2

The actor also talks LUST FOR LOVE, plus the upcoming BLOODSUCKING BASTARDS with Pedro Pascal 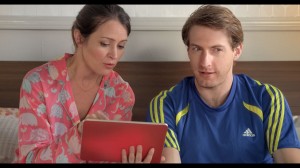 In addition to THE LORD OF CATAN, Kranz worked with more of his DOLLHOUSE friends on the feature film LUST FOR LOVE, which recurs on VoD and is currently available on iTunes. Kranz stars opposite Dichen Lachman (DOLLHOUSE, LAST RESORT), who also produced, in the low-budget independent romantic comedy. Other DOLLHOUSE personnel appearing in the film include Enver Gjokaj, Miracle Laurie, Felicia Day and Maurissa Tancharoen.

ASSIGNMENT X: At one point did Dichen Lachman come to you and say, “Would you like to do a movie where the budget is a buck-ninety-five?”

FRAN KRANZ: My God, is it that much? I want more money. I thought it was like half that. I met [LUST FOR LOVE writer/director] Anton [King] early on. It was basically when I met Dichen. I knew about this script long before we started filming it. Honestly, I love these guys so much I think I’d do just about anything, because it’s fun to be with them, and Enver was saying he would be the doorman in a movie if it meant for us to be hanging out together. It’s really not about the part or the script or anything, it’s an opportunity as friends to get together again, because we’re all still a pretty tight-knit family from DOLLHOUSE. But the fact that it was something that was really charming and sweet and had real potential made the whole situation even better.

AX: There’s a scene where you pick Dichen Lachman up and carry her around and then she picks you up and carries you around. How was that to shoot?

AX: Where can people see LUST FOR LOVE right now?

KRANZ: It’s up on iTunes and I know they had a little opening in England, but I unfortunately couldn’t go. We’re trying to get a screening in Australia. I was busy and missed London, which was a real shame. People can buy it, we’re still plugging away at it, because it’s a really sweet little movie and we want more and more people to see it, and I don’t know if there’s more or bigger releases to come, but it is available and we are still finding ways to get it out to people. Definitely stay tuned – that’s something Dichen and I and Anton and I are really passionate about. In fact, I just spent the other day signing twelve hundred autographs for it [laughs]. LUST FOR LOVE is really charming, really sweet. [Some of Kranz’s character’s behavior] makes me cringe, but I think we can all relate to it more than we care to admit. It’s great, and it’s sort of irresistible [laughs].

AX: Were you expecting MUCH ADO ABOUT NOTHING to blow up like it did?

KRANZ: No, not at all. It’s crazy. I thought it was going to end up on iTunes like DR. HORRIBLE, if that. I showed up the first day of work and I still didn’t understand what was happening. There was a grip truck. I still didn’t understand that it was a movie [as opposed to a video of a staged reading]. It was bizarre. It’s still sort of surreal. A friend of mine sent me a photo of a poster at [a film festival] and that’s an image that will stick with me, because that was a real gift, that movie. Because I didn’t expect anything to come from it – other than hanging out with my friends.

AX: Between LUST FOR LOVE and MUCH ADO ABOUT NOTHING and LORD OF CATAN and some of your upcoming projects, do you feel like you’re becoming part of the indie film world?

KRANZ: Yeah, it seems to be what I do. To be honest, I like the collaboration you experience in an independent film. I find that the studio films I’ve done, more often than not, it’s pretty set in stone what the director wants and what they’re going to do. And they have the time and they have the money to do it. You don’t get to problem-solve, which doesn’t sound like a good thing, but it can be a lot of fun and I think in terms of doing theatre and rehearsing and bringing a play to life, a lot of the rehearsal process is problem-solving, figuring out, “How do we put this on its feet?” And I find that in independent movies. We get to set and we’ve got to figure it out. And that’s exciting. That’s rewarding. That’s where I think passion and all the hard work comes in and that’s sort of the painful and beautiful process of independent filmmaking. 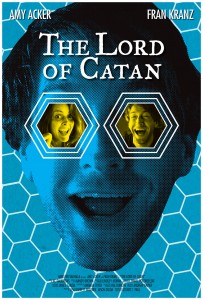 AX: What other projects do you have going on?

KRANZ: I just shot a bunch of things and it looks like two have already been bought, but I don’t know the details. I have a movie called LAST WEEKEND starring Patricia Clarkson that I believe is coming out coming out this summer. Then another movie, MURDER OF A CAT, that was at Tribeca, has been bought, but I don’t know the details of that. Both of these are coming out in theatres, so that’s exciting. People will be able to see them. Then I actually just did this one for GQ’s website, and Conde Naste. They’re teaming up to create little Web series for the visual side of their brand, and I just did something called THE HANGOVER LAB with GQ, which was sort of a unique, strange thing for me, but really enjoyable. I essentially hosted people getting hangover cures, which was sort of [laughs] a hard thing to witness sometimes. And now I’m about to go start another movie in New York, but I don’t even know if I [am allowed to discuss it]. I have another movie coming out called BLOODSUCKING BASTARDS.

AX: Does that involve vampires?

KRANZ: Yeah. Think OFFICE SPACE meets SHAUN OF THE DEAD. It’s an office comedy with vampires, and it’s starring myself and Pedro Pascal, [Oberyn Martell] from GAME OF THRONES. We play archenemies in it, and it’s a hilarious, hilarious movie. I’m very excited for everyone to see it. It’s also very bloody. In fact, it kind of gives CABIN IN THE WOODS a run for its money. I was head to toe, every orifice covered in blood. Just full-on bucket, full-on, soaking wet – I might as well have jumped in a pool of blood and gotten out. You could not have put more blood on me. It was pretty intense [laughs]. For a good amount of time. It was pretty intense. So that’s something to look forward to. It’s a really, really fun movie.

Joey Kern is in it, Emma Fitzpatrick – there’s a really, really cool cast, but obviously Pedro – in the fanboy world, I think Pedro is the coolest actor going right now. We became good friends. We actually went straight from that to do the pilot together. Unfortunately, there’s just no news there, because it didn’t get picked up.

AX: What was the pilot?

KRANZ: It was for ABC. It was called EXPOSED, written by Charles Randolph, directed by Patty Jenkins. It was great. It’s a real shame. I thought it was such a smart show. It actually made me interested in things I was not interested in before. I thought it was exciting, I thought it was cool, really well-written. I couldn’t believe it was for network television. It just felt like a cable show, and it just had a lot of balls, and it was opening my eyes and I think it would have opened a lot of people’s eyes to the level of surveillance and the level of privacy, or lack of privacy, in today’s world, which is something I think we all know about, but also haven’t fully investigated. And this was a show that was really probing deeper than, “Here’s the occasional Edward Snowden interview.” It was really fascinating and kind of terrifying. Unfortunately, it’s not going to go. But you never know. We’ll see. He might find some iteration of it to get out there one day, because Charles Randolph is a really, really talented writer. He needs to have more of his work out there. But that’s that.

AX: And Pedro Pascal was in that with you as well?

KRANZ: Pedro Pascal, Ben Barnes, Mary Elizabeth Winstead, Brian F. O’Byrne, Peter De Jersey, Sandrine Holt, a lot of good theatre people, Tony winners – Sandrine Holt is on HOUSE OF CARDS, Mary Elizabeth Winstead from SCOTT PILGRIM, Ben Barnes from THE CHRONICLES OF NARNIA – we got a really classy cast. I was shocked, frankly [laughs]. I still have to remind myself, “You need a job,” because you never know in this business, especially television pilots, but that was something I was very proud to be a part of. But on to the next one. I’m going to be starting a movie in ten days.

AX: What’s the movie? Are you allowed to say the title?

KRANZ: I don’t know, honestly. But I am about to start work. You learn to deal with rejection so well in this business; you learn to deal with things falling apart. But some things are oddly more painful. CABIN IN THE WOODS basically being put on hold for three years [after filming was completed, the distributor went bankrupt and release was put on hold until Lionsgate purchased it] was one of the harder things I’ve dealt with, a lot harder than losing a role you really want. There are all kinds of downs in this business that take you by surprise. You kind of have to become robotic. But yeah, I’ve got plenty on the horizon, so it’s exciting.

And I’m very excited for these movies to come out, especially MURDER OF A CAT, because it’s a really weird role and I’m very proud of it and the movie. The movie is kind of polarizing. It’s so quirky and bizarre that some people love it and some people hate it, but in a way, I’m kind of proud to be a part of things like that, because it’s original, and I like how my career seems to be shaping itself up that way, being part of fun and original things, so this definitely continues that.

AX: Anything else you’d like to say about the short film LORD OF CATAN or anything else?

KRANZ: It’s just such an awesome short. It’s so insane. I wish I could be more articulate, but my brothers saw it, and a couple of my friends saw it, my agent came and saw it, and that is the first thing that comes out of people’s mouths – “Wow, that is insane.” And it’s great. It’s super funny, it’s super dark, and I’m a fan of both of those things. And [SETTLERS OF CATAN] also such a popular game, such a great game, I really hope the creators and fans of CATAN all get to see this movie and love it and appreciate it as much as I do and did when I read the script. I’m really proud to be a part of anything CATAN. I’m a crazy big fan of the board game. I love doing my SETTLERS OF CATAN night, I love introducing people to the game, I love playing it on my iPad. And so to be a part of it in some way is really an honor. And I hope the creators and fans acknowledge it and are fans of what we’ve done. That’d be really special. That’d be a really cool sort of tradition or thing larger than me to be a part of.

Related: Exclusive Interview with Fran Kranz on THE LORD OF CATAN – PART 1

: Exclusive Interview with Writer-Director Stuart C. Paul on THE LORD OF CATAN