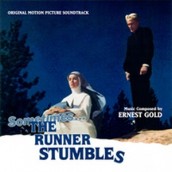 Funnily enough, the eleven film collaboration between Stanley Kramer and Ernest Gold will likely be most popularly remembered for their one-shot laugh fest IT’S A MAD MAD MAD MAD WORLD as opposed to the far more serious music that was otherwise conjured by the likes of THE DEFIANT ONES, ON THE BEACH and INHERIT THE WIND. But even among these sweepingly somber scores, the one film, and soundtrack that’s completely flown under the radar is Kramer’s 1979 swan song THE RUNNER STUMBLES, in which had the audacity to dramatically cast the ever-loveable Dick Van Dyke as a priest accused of murdering the nun he’s forbiddingly fallen in love with. While the movie still remains unavailable beyond its collector coveted VHS release, we can give thanks to Buysoundtrax for releasing Gold’s beautiful score, certainly one of his best in service of the auteur of American cinematic seriousness. As based on a real-life criminal case from 1919, Gold ingeniously bases his theme on “My Rumble Seat Gal,” a jazz age song of the composer’s own devising. But as opposed to some floozy from the big city, the melody it ironically springs from accompanies the arrival of Kathleen Quinlan’s nun to a small mining town. Gold treats the melody for all of its poetically tormented worth, on one hand going with the bliss of a woman of the cloth who sees romance as part of God’s unknowable plan, while countering it with a Father who sees his life being ripped apart. So dexterous is Gold’s orchestration that his memorable theme also takes on a rural quality as well in creating a dark, stifling town of the moral judgment that awaits – an anguish and accusing religiosity weaves its way about the score with a hymnal quality.

The RUNNER might falter, but Gold’s music is a major discovery, a work of heartbreaking beauty that stands as one of his finest score, the history of its creation and a terrific sum total of a serious collaboration illuminated nicely by Randall D. Larson’s liner notes that nicely quotes his own interview with Gold.

Click on the link to Purchase the THE RUNNER STUMBLES soundtrack