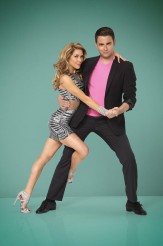 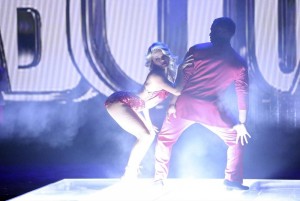 DANCING WITH THE STARS: week six wasn’t a complete shocker, but when 76-year-old Tommy Chong outlasts twenty something Jonathan Bennett it is a bit of a surprise, for sure! Yes, Bennett & partner Allison Holker finished season 19 in ninth place while Chong  & Peta Murgatroyd continue in the competition as well as low scoring Nascar driver Michael Waltrip & Emma Slater. Pitbull did his best to fill in for the still gone Len Goodman, who thankfully will return after a four  week absence next week. Goodman’s quips are sorely missed. And as Pittbull demonstrated tonight it’s not easy to be witty and articulate your critiques. Alfonso Ribeiro, once again, shot up to first place with partner Witney Carson. Chong & Murgatroyd, although still in the dance game, landed in last place.

Alfonso Ribeiro and his partner Witney Carson
Always so much fun to watch. Inaba spanked him ten times! Pittbull did a jiggy for him. Hough loved it. Tonioli just yelled out Yes to his Salsa.
Scores: Inaba –10, Pitbull – 10, Tonioli – 10,  Hough –  9, Harland – 10

Antonio Sabato Jr. and his partner Cheryl Burke
Most relaxed he has ever been. Inaba said he is slowly improving. Pittbull said it was fun watching his Salsa. Hough said he got her in the mood. Tonioli said he is transferring better.
Scores: Inaba – 7, Pitbull – 7, Tonioli – 7, Hough – 7, Harland – 7

Bethany Mota and her partner Derek Hough
She tripped. Inaba called her Tango beautiful. Pittbull said it was well synchronized. Hough said it was pure Tango. Tonioli told her it was straight down the line.
Scores: Inaba – 9, Pitbull – 9, Tonioli – 9, Hough – 9, Harland – 9

Lea Thompson and her partner Artem Chigvintsev
Impressive. Inaba said she was disappointed. Pittbull said her Salsa was sexy. Hough told her to trust her partner. Tonioli said to be careful with her shoulders
Scores: Inaba – 8, Pitbull – 8, Tonioli – 8, Hough – 8,  Harland – 8

Tommy Chong and his partner Peta Murgatroyd
Oops! Inaba thought he was smooth, despite a couple of mistakes. Pittbull said he is the most interesting man on the dance floor. Hough said he was awesome. Tonioli said he was back.
Scores: Inaba – 7, Pitbull- 7, Tonioli – 7, Hough – 7, Harland – 7

Jonathan Bennett and his partner Allison Holker
So much better! Inaba praised his endurance. Hough gave him a hug. Pittbull called his Jazz amazing. Tonioli said he got his mojo back.
Scores: Inaba – 8, Pitbull  – 8, Tonioli – 8, Hough – 8, Harland – 8

Who went home: Jonathan Bennett & Allison Holker
Who Has Legs To Take Home The Mirror Ball: Alf is in ‘da house!