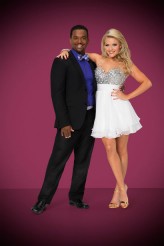 The designer is sent packing on DWTS Most Memorable Year Night 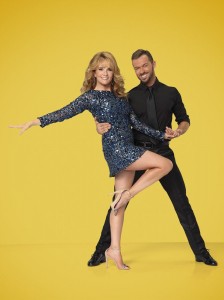 He’s back…Carlton from THE FRESH PRINCE OF BEL AIR finally made an appearance on DANCING WITH THE STARS. And, to the delight of  Alfonso Ribeiro and his partner Witney Carson, the reemergence earned them a perfect score, the only one of the night. In a week where the celebs discussed their most memorable year, Lea Thompson had everyone choking back tears. Her Contemporary tribute to her dad, whom she lost many years back, was so touching and sentimental it earned her & partner Artem Chigvintsev an almost perfect score of 39. Not only was tonight most memorable year night but it was also the audience gets to score night – that is if you live on the east coast. Those on the west were shut out of voting because the show actually airs here three hours later than the east.

So, really it wasn’t so much as all of America voting as it was one third of America voting. Still, since head judge Len Goodman was out of town it was an interesting concept to see what “part” of America thought. Ironically, they were never more than a point different from the judges. Sadly, though, designer Betsey Johnson & Tony Dovolani were sent packing. Next week …the results of the switch up! Stay tuned.

Betsey Johnson and her partner Tony Dovolani
Not enough content. Inaba said she was phenomenal in her Jive. Hough called her impressive. Tonioli said she went wrong at one point.
Scores: Inaba – 8, America – 7, Tonioli – 7, Hough – 7, Harland – 7

Antonio Sabato Jr. and his partner Cheryl Burke
Heavy footed. Tonioli said he needed to reach out fully. Hough said she saw he was getting more comfortable in his Samba. Inaba said he is proving to be a heart throb.
Scores: Inaba – 7, America – 8, Tonioli – 7, Hough – 7, Harland – 7 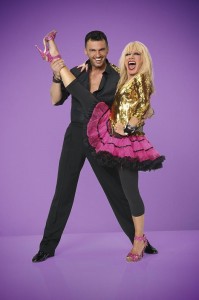 Lea Thompson and her partner Artem Chigvintsev
The tear jerker of the night. Inaba said she would remember that Contemporary for forever. Hough called it flawless. Tonioli said it was exceptional.
Scores: Inaba – 10, America – 9, Tonioli – 10, Hough – 10,  Harland – 10

Tommy Chong and his partner Peta Murgatroyd
He just couldn’t keep up. Inaba thought he had great naturalness. Tonioli said he had a free spirit. Hough said his Jive just reminded her of how obsessed she is with him.
Scores: Inaba – 7, America- 7, Tonioli – 7, Hough – 7, Harland – 7

Jonathan Bennett and his partner Allison Holker
He is the most enthusiastic for sure. Inaba said he is just doing the same thing over and over again. Hough said she loved his attack but agreed. Tonioli said it wasn’t a good Samba.
Scores: Inaba – 6, America  – 6, Tonioli – 6, Hough – 6, Harland – 7