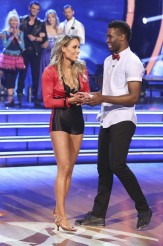 Oh no Lolo…it’s time to go go! After a disastrous debut on DANCING WITH THE STARS, Olympian Lolo Jones, along with new pro partner Keo Motsepe, was the first to be eliminated on DWTS: Season 19. There was no getting this castoff wrong. In the middle of her dance set she completely blanked out, forgetting her moves while Motsepe desperately tried to bring her back in step. Jones was one of four celebrities in danger of being eliminated – Betsey Johnson (with Tony Dovolani), Michael Waltrip (with Emma Slater) and Lea Thompson ( with Artem Chigvintsev) were also left in jeopardy until the very end.

Aside from the inevitable castoff was the joyous return of The Results Show, where we get to see more behind-the-scenes footage and special video segments, a much missed DWTS 2nd show of the week gone for the last two seasons. Those videos this week included a women’s and men’s one featuring the cast explaining why they wanted to be cast on the show. Also seen was a video showcasing the new pros Artem, Keo and Allison. But the best video of the night came when they showed sweet 21-year-old Derek Hough’s audition tape from almost nine years ago. Hopefully we will get to see more of those from the other pros. Having the Results Show back gives us more entertainment and more time with the duos, not a rushed quick 30 seconds for the entire week. Let’s hope it stays. Cross fingers!

The encore for the night went to Alfonso Ribeiro and Witney Carson (who also landed in first place), rightly so. Musical guest Smokey Robinson showed the younger generation what it is to be relevant and everlasting for over 6 decades. He sounded just as good as he ever has on stage. Next week, the competition continues…12 couples are left, let the dancing continue!