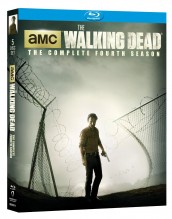 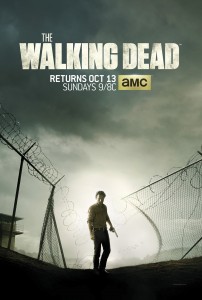 Even when you have the tendency to rip apart THE WALKING DEAD for its occasionally slow and plodding storytelling, it continues to do things normal TV series never dare tread – be bold and expectation-defying.

THE WALKING DEAD, in four seasons, has provided a lush, rich zombie apocalypse – the closest we’ve ever had to a TV series capturing the complexities and nuances of the best of zombie feature films, most notably the cannon of George A. Romero.

And despite the constant showrunner turnover (Scott M. Gimple now steers the ship), there’s been the guiding force of executive producer Robert Kirkman whose comic book series serves as navigational tool of where the series might be going, even if it veers off course occasionally for the TV series.

Season 4 begins some time after Season 3 ended with the attack by the Woodbury vs. Prison war with the Governor (David Morrissey). The Governor lost, packed up and left and now there’s a blended community of the two groups at the prison without that scary leadership.

Things are peaceful, but it still doesn’t mean there’s friction. And while the show does get a little slow during a virus outbreak, the reintroduction to the Governor really gooses the first eight episodes of the season. It’s a given that the Governor is up to his old tricks and a mid-season confrontation sends the Prison group splintered and separated.

The second half of the season features some interesting storytelling since we get nearly whole episodes devoted to specific characters and their journey.

We also get the introduction to two pivotal characters in the comic book universe during the second half – Sgt. Abraham Ford (Michael Cudlitz) and Dr. Eugene Porter (Josh McDermitt). Porter has a potential cure for the zombie virus and his protection is important in the survival of humankind.

Terminus also plays a big part in the latter half – a destination that everyone seems to be traveling to hoping for safe haven, but proves to be a much darker place than anyone imagined.

Along the way Rick Grimes (Andrew Lincoln) continues to draw away from his son Carl (Chandler Riggs) and ultimately back together with him during their journeys; Daryl (Norman Reedus) comes to understand that he has a family within the group, even though it’s not blood; Maggie (Lauren Cohan) and Glenn (Stephen Yeun) profess their love for one another; and there’s many more excellent subplots including Carol’s banishment form the prison (Melissa McBride) and more Michonne (Danai Gurira) back story.

There are so many great things about Season 4, that even the dull spots are more than made up for. There’s a great OF MICE AND MEN-esque subplot that is heart-wrenching and shocking all at once. It’s incredible story-telling any way you look at it.

When the Governor re-appears, his mini-arc this season provides exceptional episodes.

Toss in a blink-and-you’ll-miss-it allusion to the Bub character from DAY OF THE DEAD (which executive producer Greg Nicotero did make-up effects on) and you have a show still firing on all cylinders. If anything, the Season 4 works much better in a binge-viewing sort of way. Waiting week-to-week, sometimes is a disservice to the series because if it’s a quieter episode, fans will cry fowl and demand more action. Viewing it as a whole, everything really locks into place in a smart and clever way.

For die-hard fans, there are three “extended episodes” of Season 4, “After,” “The Grove” and “A”, commentary on six of the episodes, deleted scenes, tons of special features and a bonus alternate moment with Rick during the season finale uttering the expletive laden final line that didn’t make it to air on AMC but was a defining moment in the comic books. It’s nice to have it here.

The Blu-ray not only features great high-def transfers but you also get all the episodes in digital format via Ultraviolet.

As THE WALKING DEAD Season 5 nears, this is a good time to get caught up with one of the greatest horror shows currently on TV. You won’t be disappointed and if you are behind, chances are you will be holed up in your house not waiting for the zombie apocalypse, but watching it unfold over the course of 16 hours on your TV set.

Related:Exclusive Photos from the WALKING DEAD at PaleyFest 2013