The executive producer/director talks about his work on the series 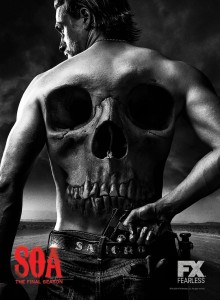 SONS OF ANARCHY, now in its seventh and final season on FX, Tuesdays at 10 PM, has its fans wondering when – on this show, it’s unlikely to be “if” – SAMCRO outlaw motorcycle and business club leader Jax Teller (Charlie Hunnam) will find out that his beloved mother Gemma (Katey Sagal) is the person who murdered his wife Tara (Maggie Siff), with a fork, no less.

At a panel held by FX for the Television Critics Association, Barclay tells the assemblage, “I’ve been here [on SONS] since Season 1. I did an episode every year except for the Irish year, where I think I was doing IN TREATMENT at that time. So I’ve always been involved with it, and I’ve obviously known Kurt since THE SHIELD. So it’s a show that I’ve never missed just as a fan and as a director.

I came in Season 4 and I’ve stayed here. And I think what I’ve tried to bring is some stability. I’ve tried to make it easier for Kurt to do his job. It’s a really hard job to make a pulp novel every week. And then, really, to have this kind of action and this level of acting, it’s very, very difficult. And I think one person trying to shoulder that is virtually impossible. So what I’ve tried to do is take some of that off of him, trying to get the production to run smoother, trying to get through the casting, trying to find the locations, and tee things up so he can continue to do these incredibly complicated novels. If you noticed in this season and last season, it’s gotten so everyone’s lying to everybody and it’s so complicated, I have to get it from him to remind everybody who they’re telling the truth to and what they did and what’s going on. It’s really become this internecine thing. So I’ve become a backstop and just sort of a force of stability, I hope.”

“And if there’s one thing I need,” says Sutter, who is also on the panel, “I think we can all agree it’s some stability. My job has gotten so much easier since Jon Pare and Paris have come on board. And it’s great having Paris, because I have a producer and a director who’s also a writer, and so the links of communication are direct. We very rarely have to say much. The communication is really a shorthand. And it’s good for me, it’s a really rare and special creative connection, which is why I’m bringing him onto the next project.”

“I will say things like, ‘Does it have to be a fork?’ every once in a while,” Barclay adds. “And how long a fork? I mean, we’ve lived with that for a while.”

Barclay, who won an Emmy for his direction on NYPD BLUE and has been nominated for directing Emmys for the past two years for his work on episodes of GLEE, has had a busy year. Following a panel, the panel, the Chicago native makes himself available for a private follow-up conversation.

ASSIGNMENT X: How many shows can you work on at the same time before you have the people on GLEE stabbing each other with forks and Jax dancing?

PARIS BARCLAY: [laughs] I think the season in between, I went from SONS – immediately, I think I did THE GOOD WIFE, which is somewhat unusual, then I did EXTANT, which is completely different, and then I did MANHATTAN, and then I did something else. So I try to do as many different kinds of shows and genres as possible. I go with the script – I read the script and try to figure out how to best execute it. So whatever the series is, if it’s in the future, like EXTANT, or in the past, like MANHATTAN, I just figure out a way to accomplish it.

AX: Do you have to do a lot of research for these things?

BARCLAY: They vary. I don’t have to do a lot of research for GLEE, but for MANHATTAN, I did have to do a lot more, because it’s mostly about physicists and the making of the atomic bomb. I didn’t know much about Los Alamos at all. So that I had to learn a little bit about.

AX: When you started on SONS OF ANARCHY, did you have to learn a lot about biker gangs, or did you just talk to Kurt Sutter?

BARCLAY: Season 1, we had quite a few consultants that helped us learn about the culture. We had the Linson brothers who were here, we had some members of motorcycle gangs who helped us. Still, to this day, we have people who are technical assistants who are working with us every day.

AX: Do you feel more part of SONS OF ANARCHY than on the other shows you direct on?

AX: Are there any characters on SONS who you’ve been instrumental in either their demise or continued survival, saying, “You know, Kurt, I really like working with this person,” or, “Kurt, this person is a total pain in the ass, please let them die”?

BARCLAY: Well, I will only say I was surprised it took us so long to kill Clay [laughs]. I was sort of watching with the fans on Twitter, and he seemed to go quite beyond his expiration date, so I thought that took quite some time and probably could have happened sooner.

BARCLAY: I like to do things that I’ve never done before. I love Julianna Margulies, so I’ll go back to THE GOOD WIFE, and obviously, I love the kids on GLEE and I’ll try to do one show in their last season. But I’m looking to do new things. I liked EXTANT, I thought that was interesting, it was a big science-fiction Steven Spielberg show. I’ll see what’s happening in the next season. I think there are some interesting things that are coming up that I’d like to play in.

AX: Obviously, you have a good relationship with the FX network. Do you have any interest in doing horror? Might you work on THE STRAIN or AMERICAN HORROR STORY at some point?

BARCLAY: No, that’s a little bit too much for me. Because I have very bad dreams. I’m super-sensitive. So I couldn’t do AMERICAN HORROR STORY – Ryan’s asked me and I’ve told him I tried to watch it and I take all of that in and I dream about it.

AX: Why do you suppose that the intra-human violence on SONS OF ANARCHY doesn’t give you bad dreams? Is it because it’s completely within human control?

BARCLAY: It may be, and also maybe because I’m part of the creation of it, so therefore I know it technically much more. If I watch THE STRAIN, I don’t know how it all happens; I just imagine it’s very real. I’m like the super-sensitive kid who doesn’t know the difference between a movie and a murder [laughs].

BARCLAY: Well, I’ll be working with Kurt on his next show, as he said, so that’ll be the next thing we do.

AX: What will that be?

BARCLAY: It’s called THE BASTARD EXECUTIONER. It’ll be his next show for FX and we’re in the process of developing it and getting it ready.

AX: Anything else you’d like to say about SONS OF ANARCHY right now?

BARCLAY: I’m really sorry it’s gone. It’s been an incredible ride, and I’ve gotten really connected to all these people, so I’m sorry to see it end.

Related: Interview with Katey Sagal on SONS OF ANARCHY Season 6