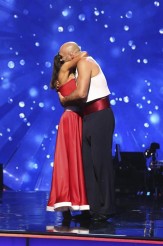 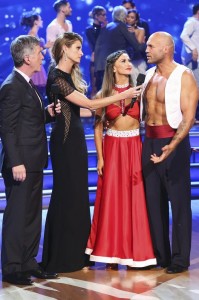 The night started out slow and ended with a bang on DANCING WITH THE STARS. Favorites were getting by with 8s when all of a sudden…bam, Janel Parrish & Val Chmerkovskiy bounced onto the floor to a perfect 40. No sooner did that happen than Tommy Chong & Peta Murgatroyd received a 10 from guest judge Kevin Hart. What is this world coming too? Actually, Chong’s Argentine Tango was pretty darn good. If that wasn’t enough for you, Bethany Mota & Derek Hough ended the night with a slam wham perfect score as well. Wow! Alfonso Ribeiro &  Witney Carson slowed down their lead again with just 32 points this week. If they are planning on taking hold of the silver they better step it up because the girls are a’ comin’. Sadly, big tough guys do finish last on DWTS. Randy Couture & Karina Smirnoff were voted off the show in this the third week. Stay tuned.

Betsey Johnson and her partner Tony Dovolani
Not much content, but what was there was elegant. Hart said she dropped it like it was hot. Inaba said she had great courage. Hough said she was flexible in her Jazz performance. Tonioli said bend it like Betsey.
Scores: Inaba – 7, Hart – 9, Tonioli – 7, Hough – 6, Harland – 7

Alfonso Ribeiro and his partner Witney Carson
Always the showman. Hart said he murdered the Quickstep. Inaba was so impressed with him. Hough told him to get lower. Tonioli said he had a strong individual style.
Scores: Inaba –8, Hart – 8, Tonioli – 8,  Hough –  8, Harland – 9

Michael Waltrip and his partner Emma Slater
Light on his toes. Inaba was mesmerized in his Waltz. Tonioli called him the prince. Hart said he won him over. Hough said it was his best dance.
Scores: Inaba – 7, Hart – 7, Tonioli – 7, Hough – 7,  Harland – 7

Randy Couture and his partner Karina Smirnoff
Rough. Inaba begged for him to bring back his finesse. Hart said he embraced the Paso Doble. Hough, too, was missing the leading man. Tonioli said his timing was behind.
Scores: Inaba – 7, Hart -7, Tonioli – 6, Hough – 6, Harland – 7

Antonio Sabato Jr. and his partner Cheryl Burke
He looked like he was having fun. Inaba told him to breathe. Hart told him he did his job in the Foxtrot. Hough said he took Len’s advice. Tonioli said he finally turned on the fun.
Scores: Inaba – 7, Hart – 7, Tonioli – 8, Hough – 7, Harland – 7

Bethany Mota and her partner Derek Hough
She did it! Inaba said mission accomplished. Hart said it was a great homage to Gene Kelly with her Jazz dance. Hough said she knew the wrath of Derek! Bruno was speechless.
Scores: Inaba – 10, Hart – 10, Tonioli – 10, Hough – 10, Harland – 9

Janel Parrish and her partner Valentin Chmerkovskiy
She nailed it! Inaba said it was insanely good. Hart said he bowed down to her Jazz performance. Hough said she was incredible. Tonioli said it was a star making performance.
Scores: Inaba – 10, Hart – 10, Tonioli – 10, Hough – 10 , Harland – 10

Lea Thompson and her partner Artem Chigvintsev
A couple of slips. Inaba said it wasn’t her best. Hart said she brought the prom back in her Cha Cha. Hough congratulated her. Tonioli said she was very versatile.
Scores: Inaba – 7, Hart – 8, Tonioli – 8, Hough – 8,  Harland – 8

Jonathan Bennett and his partner Allison Holker
Slippery feet. Inaba wanted to encourage them. Hart said Bennett owned that song. Hough told him to work on his frame. Tonioli said he got the character.
Scores: Inaba – 8, Hart – 8, Tonioli – 8, Hough – 8, Harland – 8