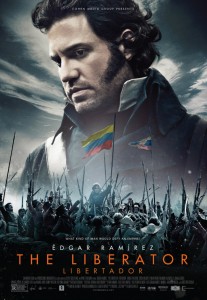 With few exceptions, Latin American actors have rarely had the chance to play the hero in major Hollywood epics, let alone for historical pictures that explored a time well before the lethal morass of troubles that stand for the sad state south of the border. But over 200 years ago, the entire continent promised to be united as a shining, freedom-respecting star to the world in the tradition of the American and French Revolutions – a dream led by the dashing figure of Simon Bolivar. Born in Venezuela and educated overseas, this one time, aimless member of the upper class transformed himself into his land’s version of George Washington, leading a battle to unite South America under the banner of freedom.

That such nobly minded revolutions usually don’t turn out to their instigator’s desire is also a given throughout history, especially such time-honored Hollywood epics as BRAVEHEART and LAWRENCE OF ARABIA. It’s in that tradition that Venezuelan director Alberto Arvelo has made the kind of old-school, lavishly sweeping movie that not only stands as his country’s most impressive film, but that of the continent as well. And who better to lead the charge than Venezuela’s top star Edgar Ramirez, a charismatic performer who’s been making his mark in Hollywood in imposingly physical turns for DOMINO, THE BOURNE ULTIMATUM, ZERO DARK THIRTY and most recently DELIVER US FROM EVIL. The son of a military offer, this journalist-turned-performer (who once essayed his country’s most notorious export in CARLOS) creates a sympathetic, flesh and blood hero from a man regarded as a icon, his impassioned performance the cinematic stuff of a warrior leading a charge of thousands (as driven with a rousing score by fellow Venezuelan Gustavo Dudamel). It’s a role, and call to arms that American audiences will hopefully take notice of when Ramirez and THE LIBERATOR show that Latin American filmmaking has come of epic Hollywood age.

ASSIGNMENT X: It strikes me that you’ve played both the most iconically evil figure to come from Venezuela with Carlos the Jackal, and now its most heroic with Simon Bolivar. Do you see these two “liberators” as completely opposite, or similar characters in their stated goals of freeing the oppressed? 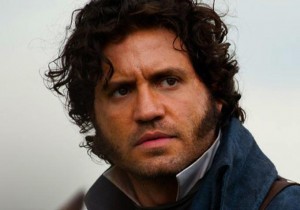 EDGAR RAMIREZ: As any other human beings, we all have similarities. What changes is the context. Ilich Ramirez Sanchez and Simon Bolivar were very intellectual human beings who also had an amazing military capacity. But they were strategists with totally different motivations, especially with their totally different legacies and results. I’ve always felt a huge, profound admiration for Simon Bolivar and what he undertook for Latin America. The independence of the continent was just the first stage of what he wanted to achieve, which was the unification of the ex-Spanish provinces into a big and strong country that would eventually play an important role in the world. That was a very revolutionary idea, and a reason why Bolivar was so ahead of his time. He knew that it was important to have the resources, the land to do it. He had a very high sense of space, which was something that also helped the American Union to become the self-providing superpower that it is now. The size of a country is very strategic, and Bolivar saw that.

AX: American audiences who are completely unfamiliar with his story (like I was myself) might find something to identify in Bolivar as a Zorro-like figure, an aristocrat who becomes radicalized, and ends u fighting on the side of the poor as a seemingly super-heroic leader.

RAMIREZ: I think what audiences here will see is that America and Latin America have been inter-connected through the centuries in much more of a way than they ever thought. The American Revolution and its follow-up The French Revolution had a huge impact on the Latin American Revolution. These were two generations that carried those ideals of liberty, equality and fraternity. We tend to think that these events weren’t linked, but they are. When you watch the movie LINCOLN, there’s a scene where a senator asks if the North want the South’s slaves to flee to Latin America, because the Abolitionist movement had already started far earlier there than it had in the United States. When audiences watch THE LIBERATOR and see that Simon Bolivar’s ideas of democracy were very similar to those of Thomas Jefferson’s, it’s fantastic to realize that connection.

RAMIREZ: We definitely needed that scale, because Bolivar’s quest was enormous. And we needed to pay tribute to that endeavor he carried out. Of course, we were influenced by great big Hollywood and international epics like BRAVEHEART, GANDHI, THE LAST EMPEROR and LAWRENCE OF ARABIA. But we also needed to convey the uniqueness of a Latin American epic. That’s why you see how the landscape and music becomes another character in the movie, because those are very important elements within our culture. We wanted to convey that so audiences could dive back into the past. 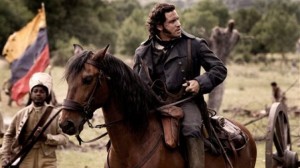 AX: You get a sense of just how much was lost for Latin America in Bolivar’s untimely death. Do you think it would be a far different place without the political infighting that cost his dream?

RAMIREZ: Absolutely. Had he lived and his project realized, for sure the world counterweights would be very different. Imagine a country of Latin America going all the way from the Caribbean to the Andes up until Bolivia. We’re talking about a country bigger than Brazil, with all the natural resources, including a way to the Caribbean and the Atlantic, almost half off the Pacific Coast. The world would have been completely different. It would have been amazing with the mix of so many different cultures, with the most advanced indigenous populations like in Peru and Columbia.

AX: What kind of inspiration do you think this movie will give to Latin American viewers, and general audiences at that?

RAMIREZ: I think THE LIBERATOR will remind them how hard it was to achieve democracy, freedom and independence. Simon Bolivar and the founding fathers of Latin American independence thought beyond the defenses of their own domains to see how the decisions of their day would affect the future 1,000 years from now. I think one of Latin America’s difficulties as a society is their need for instantaneous satisfaction. The long view ahead into the future is something we should rescue from a movie like this.

THE LIBERATOR opens in theaters on October 3rd