The director/producer discusses his work on the Showtime series 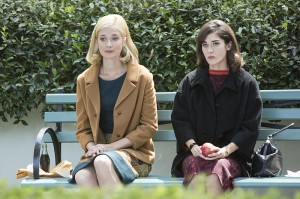 Michael Apted is a multi-award-winning director associated largely with feature films both narrative (COAL MINER’S DAUGHTER, GORILLAS IN THE MIST, THE WORLD IS NOT ENOUGH) and documentary (including the UP series of features, which revisits the same group of people every seven years, starting with 7 UP and currently at 56 UP).

Apted also does television from time to time. He’s one of the producers and directors on Showtime’s MASTERS OF SEX, which has its Season 2 finale Sunday, September 28 at 10 PM, and has been renewed for a third year. Apted’s work on the show, about real-life sex researchers William Masters, played by Michael Sheen, and Virginia Johnson, played by Lizzy Caplan, is why the filmmaker is in attendance at a set visit hosted by Showtime for the Television Critics Association.

ASSIGNMENT X: How did you come to be involved with MASTERS OF SEX?

MICHAEL APTED: I’d worked with [MASTERS OF SEX creator/show runner] Michelle [Ashford] many years ago on another television show, ten, fifteen years ago, so we knew each other, and she was turning out the first season and she asked me to come and do one. And then I liked it, so I then did another one straight away, and this season, they asked me to come back and do the first three so you can sort of set a style for it. So I will have done four of them.

AX: You’ve been producing and directing now for a very long time. Are you still learning anything while you’re working?

AX: What are you learning on MASTERS OF SEX?

APTED: I’m learning about a lot of pacing. I’m using a lot more wide shots and I try not to do too much cutting. I try to give an audience a break before I go to fast cutting and stuff like that. But this is enjoyable, because the material is good, there’s a nice atmosphere, people are here to work, Michael [Sheen] sets a good atmosphere, and then I just think it’s intriguing to tell a very modern story as a piece of history, which it is. We’re having these discussions, these divisions about sexual behavior now. They’re only a bit different from what was happening when they were working in the Fifties, so it feels oddly contemporary, and yet in a period.

AX: MASTERS OF SEX has a lot of scenes that involve depictions of sexual activity. Do you have to reassure any of the actors during those scenes, or is everybody by now sort of accustomed to it?

APTED: I think you have to make them comfortable. It’s always awkward, but they’re very good and we all know the rules, what you can show and what you can’t. I think if you make them part of the process, so you’re not just throwing things at them. And it was tricky. I [directed] a sex scene with Beau [Bridges] and Allison [Janney], neither of them [young] chickens and all of that. We worked it out and we sort of choreographed it slowly, and they were part of it all the way, and I think that helps – just making them part of it. Because they know what they have to do. Don’t lay it out for them or whatever, just make it a growing process.

AX: On MASTERS OF SEX, there’s a lot of discussion between the actors and the writers before the scripts are finalized. Are you in the room for any of that on the episodes you direct?

APTED: No, not at all. That’s the writers’ room. That’s the difference between doing a movie and this. At each end, it’s different. [With television] the writing process, you’re not really involved in that at all. And the editing process is very short for the director. I’m used to seeing the thing all the way through. So that’s a little upsetting to hand something over. In four days, it goes through four different fingerprints and God knows what comes out at the end. But we haven’t done badly on this.

AX: Anything else you’d like to say about MASTERS OF SEX?

APTED: I’m just thrilled that this is off to such a good start. You’re always worried [but the worry is] lost the fact that it’s fresh and it’s got some legs. I think it’s got the chance of a long run, because it’s very rich material. We’re not scratching around for stories – there’s a ton of stuff, a rich vein of stuff in there.