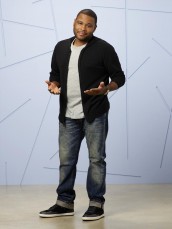 The star/executive producer also talks culture, GUYS WITH KIDS and the Food Network 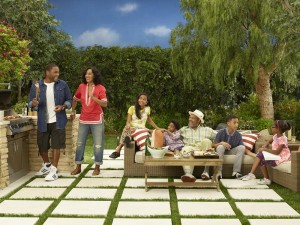 In ABC’s new comedy BLACK-ISH, Wednesdays at 9:30 PM, executive producer Anthony Anderson stars as Andre “Dre” Johnson. Dre is a successful, self-made man with a wife and three children. On the one hand, Dre wants his kids to go into the world without any sense of racial divide; on the other, he wants them to have a sense of their cultural roots.

Dre’s character and his familial issues are close to home for family man Anderson, who wound up having BLACK-ISH creator Kenya Barris incorporate a real-life incident into the series pitch and the body of an episode – to Anderson’s astonishment, his son requested a bar mitzvah.

“My son was twelve at the time,” Anderson tells a panel from the Television Critics Association at a Q&A session sponsored by ABC. “He came home and we had a serious conversation, because he said, ‘Dad, I don’t feel black.’ And I was like, ‘Well, son, what do you mean by that?’ And he went on to explain.

“It goes back to what Kenya said [about] us giving our children better than what we had growing up. Kenya grew up in Inglewood, California. I grew up in the ‘hood, in Compton, California. And the existence that my son knows is nothing short of privilege, being in private school since the age of four and his surroundings in that environment is what he was referring to. And I was like, ‘Well, son, this is your black experience. That black experience that you have right now is different than the experience that I had growing up. And he got it and understood it. And then in the same breath, he said, ‘Okay, Dad. For my thirteenth birthday, I want a bar mitzvah.’

“And I looked him dead in the eye, and I said, ‘So you really aren’t black? Let me just figure out how I’m going to do this.’ So we had a compromise. I told him, ‘Well, you now, that’s not our culture. That’s not who we are and what we do. But I will throw you a hip-hop bro mitzvah.’ And that’s what we did. I trademarked the name ‘bro mitzvah’ and I threw him a party. He’s fourteen now – to this day, all of his Jewish friends say that was the best bar mitzvah they’ve been to. And that’s in essence what helps sell the show. But they’re all authentic sotires that Kenya and I had come up with, and that’s what this was born out of, a conversation that Kenya and I had a year ago.”

Later that day, at a party ABC throws for the Television Critics Association and its talent and creative staffers, Anderson is available for a follow-up conversation. Anderson has done television comedy before – he created and starred in the series ALL ABOUT THE ANDERSONS, playing a fictionalized version of himself, and he was in the 2012-2013 NBC GUYS WITH KIDS. He also had a relatively humorous role in the original TRANSFORMERS. However, he’s also done a lot of drama, including roles in THE DEPARTED, THE SHIELD, K-VILLE, TREME and the last fifty episodes of the original LAW & ORDER as Detective Kevin Bernard.

ASSIGNMENT X: Were you looking to do another comedy at this time, or were you thinking, “Well, let’s see what comes”?

ANTHONY ANDERSON: No, I was actually looking to do another comedy. Before GUYS WITH KIDS, I did the last two-and-a-half seasons of LAW & ORDER, and before that, there was K-VILLE, and before that, there were movies like THE DEPARTED and HUSTLE AND FLOW, things of that nature, so I was wanting to get back into the comedic world, and GUYS WITH KIDS happened. It didn’t last long, and I still wanted to stretch that muscle, and here we are with BLACK-ISH.

AX: Was the subject matter of BLACK-ISH something you particularly wanted to talk about at this time? Did you feel like the next comedy you went into, you wanted to discuss something a little more topical, instead of doing totally colorblind?

ANDERSON: Well, no. You know what? It’s not that I set out to do this, it just happened. My partner Kenya Barris and I, we sat down and had a conversation. We were just getting to know one another about a year ago, and all of this came out of that conversation. And a few months later, Ken came to me with BLACK-ISH, with the idea. So it’s not that we wanted to tackle certain issues or whatnot, it’s just the fact that we looked at the landscape of television and there was a void, there was something that was missing. And we decided that we wanted to fill that void, and we’re filling that void with BLACK-ISH, and so that’s what it is, that’s how it happened.

AX: Do you feel like any culture – black, Hispanic, Jewish, Korean, Middle Eastern – when it hits a certain financial mark, tends to de-culturalize?

ANDERSON: It’s not necessarily about de-culturalizing, it’s about sometimes you get lost in the sauce. Every generation wants the generation after them to do better, especially when it’s their children and their family. And in assimilating, sometimes people can lose their footing and forget who they are and where they come from. So it’s not that it checks out at this dollar sign or whatnot, it’s just that you want to raise your children to see no color in this homogenized world that we live in, but you also don’t want them to forget who they are. And that’s what it is. That’s just a universal dream, to have your children live better than what you did.

AX: How does your real son feel about having parts of his life being shown as part of a TV show?

ANDERSON: He’s excited about it. He actually auditioned to be my son [in the series], but was just a little too cool. So the stories that we’re sharing are his experience and my experience and for him to sit at home and think, “Oh, you made an episode about this conversation,” or “You made an episode about …” whatever it is he may be going through. Same with my daughter. So he’s excited about it. He enjoyed the pilot and enjoyed the show and is looking forward to being a part of the show if he can be.

AX: Your last scripted series was GUYS WITH KIDS, where you played the parent of children who included a relatively new baby. Are you missing at all dealing with infants, or are you going, “You know, I did that in real life, I did that for a year on TV, enough”?

ANDERSON: No matter who you are, as a parent, any time you deal with babies, you want to have another baby. So I miss that aspect of it, just because of the innocence that children have and that infants have. I like that, the honesty in which they exist, because they know no lies. They know nothing different than just being who they are, so I miss that.

AX: Laurence Fishburne’s production company Cinema Gypsy is making BLACK-ISH and he plays Dre’s dad. When you took the project to his company, was it with the idea that he would do it, or just the idea that the company would make it?

ANDERSON: No, it was the idea of him doing it. We didn’t need a company or anybody else to come on board to help us make this happen, we took it to Laurence. My partner Kenya actually took it to Laurence before he had come to me with the finished product and said he had Laurence attached and on board to be my father. And like I said, Laurence and I have known each other close to ten years and have always had respect for one another and always wanted to work together, and here we are now.

AX: Do you have any other projects going on currently?

ANDERSON: I have a new show on the Food Network that I do called EATING AMERICA WITH ANTHONY ANDERSON and I just travel the country going to food festivals.

AX: Do you have a favorite food festival?

ANDERSON: Not necessarily. I’ll give you my top three – Rib Fest in Chicago, Barbecue Fest in Trion, North Carolina, and the New Orleans Food and Wine Festival.

AX: Is there anything you’d like to say about BLACK-ISH right now?

ANDERSON: It’s an aspirational, inspirational show about a man’s first-generation success, trying to raise his children to see no color in a homogenized world and hold onto their heritage. That’s about it. It’s a universal story of trying to have your children do better than what you did.