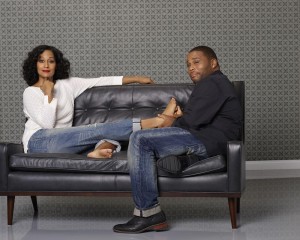 Kenya Barris created the new ABC comedy BLACK-ISH, Wednesdays at 9:30 PM, with an eye to putting something like his own family life on television. BLACK-ISH stars Barris’ fellow executive producers Anthony Anderson and Laurence Fishburne.  Anderson plays Andre “Dre” Johnson, a successful, self-made man with a wife and three children, plus an opinionated father, portrayed by Fishburne. Dre is trying to balance wanting his children to grow up with a sense of racial inclusiveness while still maintaining their cultural roots.

These issues are germane to both Barris and Anderson in their real lives. As Barris tells members of the Television Critics Association at a Q&A session ABC has arranged for BLACK-ISH, “When I started doing it, it was a way of looking at the world from where we are today. It could be black, but at the same time, you could be Asian. You could be Jewish. You could be from Middle America. We’re taught to give our kids more than we have. That’s just the international rule. But sometimes in doing that, you lose a little bit of what you remember or what you thought your upbringing was, and it’s like, how do you relate to [that]? Did I overcorrect and how do you now raise your family? It’s a family show. And ultimately, that’s what we feel like we wanted to do, is a show about a black family. It wasn’t about a show that happened to be black. It was actually about a black family. But it could be a lot of different people’s families and what they’ve gone through and where we’re at today.

“Honestly, a little bit of the evolution of this comes from my life. My wife’s a doctor. She’s mixed [ethnically], as Tracee [Ellis Ross, who plays Anderson’s wife] is, and we have five kids. This was something that I wanted to do that was really personal. And it sort of came up – my youngest daughter Lola came into the room, and [what happened inspired] one of the scenes that was actually in the pilot. She was trying to explain a little girl in her class to me, and I was like, ‘Hold on, who are you talking about?’ And she’s like, ‘You know, with the …’ and I was like, ‘Hold on. Do you mean the only other little black girl in your class?’ And she was like, ‘I guess.’ My wife was like, ‘Isn’t that beautiful?’ And I was like, ‘This is ridiculous. Why couldn’t she just say that?’ But it made me realize they are coming up in a different world.”

After the panel, Barris remains for follow-up discussion with several reporters.

ASSIGNMENT X: Had you thought of taking this series to a cable network, as perhaps some things you want to explore might not work on a broadcast network?

KENYA BARRIS: Literally, I think everyone [in terms of broadcast and cable networks] bought it. We literally chose ABC because they were the most willing to go there with us. And we couldn’t do some of the things that we could do [on cable], but we could reach more people with MODERN FAMILY as our companion. You could not ask for anything more than that. It’s a platform that cable can’t provide and show it to more people and hopefully be more successful to a wider group and open doors.

AX: One of the issues you deal with in BLACK-ISH that is somewhat unique is the whole discussion of who’s black, what constitutes being black, especially when it comes to Tracee Ellis-Ross’ character, who you’ve said is based on your wife …

BARRIS: Sure. But I think that makes for some of the best stories. When you have some type of obstacle you’re trying to overcome, that’s where the best comedy comes from, when you actually can hit something that people don’t want to talk about, but in an honest, funny way, hopefully, that’s what we’re going to do. 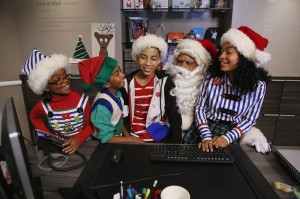 BARRIS: Anthony and I were friends and all of us were putting our stories together and making it one story, because a lot of us share the same type of experiences.

AX: Is this a show in some ways about a parent worrying that his kids are turning into the green moneyed class?

BARRIS: Or soft. Or hard. It’s just wondering if your kids are different than what you were.

AX: It seems like a lot of the premise is based on what happens when parents are from one economic class, but their kids are raised in a different economic class. Is there any stuff about Dre being stressed at work, and him wondering if he should take it easier at work, but then would that screw up everybody’s lives economically?

BARRIS: Sure. We’re going to explore some of those things, like if you try to work at home, what is the most important sometimes? This is not a rich family, they still need their jobs, they still have to work. Work plays a part in all of our lives.

AX: How much of a producorial role does Laurence Fishburne have in this?

BARRIS: A huge part. He’s our partner. He has a point of view and a say and he’s been a big partner for me since the beginning and really a champion of the show.

BARRIS: He’s happy. He says he gets to do comedy and he gets to come out and it’s one of the big things in an Alec Baldwin-esque way, to see him take a different turn.

AX: How do you hope people will respond to BLACK-ISH?

BARRIS: I want people to be excited, like, “I didn’t know that. I thought that before – I didn’t think that.” So hopefully we can be a water cooler type of show.

AX: Is there anything else you’d like to say that didn’t come up on the panel?

BARRIS: Just that I’m hoping that everyone embraces this show as a family show. You know what I’m saying? Not a “black” show, but a family show that speaks to everyone.