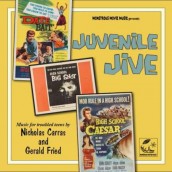 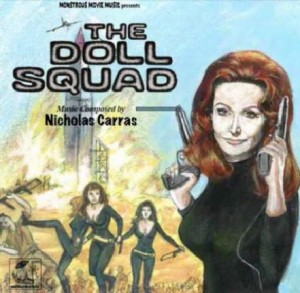 After starting out with Grade-A re-performances for the energetic scores that graced such wonderful B- genre features as THE DEADLY MANTIS and DAY OF THE TRIFFIDS, David Schechter’s label Monstrous Movie Music has segued to releasing the actual soundtracks for even loonier sci-fi movies like KRONOS and MISSILE TO THE MOON, with some decidedly non-creature filled detours into westerns and prestige Ernest Gold scores in the bargain But for all of their sporadic and increasingly eccentric titles so far (whose latest batch includes a herd of deliriously scored oaters with THE GATLING GUN and a “Western Medley” collection), it’s a trio of ninja vixens and high school greasers that just might prove to be the most wildly entertaining entries of the lot.

Exploitation impresario Ted V. Mikels can count ASTRO ZOMBIES and THE CORPSE GRINDERS to his resume, but no picture of his has had the grrll power impact of 1973s THE DOLL SQUAD, wherein cat-suited babes under beck and call of the government take down a world-conquering crazy on a lunchbox budget – but with a premise that gave birth to CHARLIES ANGELS. Given the incredible funkadelic jazz action music of Nicholas Carras, you might assume you’re listening to some long-lost Lalo Schifrin score launching a renewed assault on Han’s island, given how much this score has in kick-ass common to that composer’s for a certain little Bruce Lee movie that came out the same year. While the Asian element is the only thing missing from Carras’ work, the fact that his musical dynamo’s fat brass could easily take on a martial arts army as opposed to Michael Ansara’s haplessly dying soldiers says much about the kitschy excitement that Carras generates. His brass-powered theme has a bodacious sexiness to it, which is catchy enough to be varied from jazzy assault to lounge lizard cocktail hour strains. Carras also makes the coolest use of an electric organ this side of Ron Granier’s THE OMEGA MAN in his action writing, whose sly, militaristic percussion wouldn’t be at all out of place if it were playing behind Farrah Fawcett delivering a karate chop. Sure Carras might not have had the budget for Schifrin’s Hollywood ensemble, but it’s precisely the lounge hour intimacy of his ensemble that makes THE DOLL SQUAD so wonderfully groovy as it jumps between smoldering, villain-baiting eroticism and shagadelic action. And if there’s more than a Bondian feel to its grooviness, hearing Buddy Kaye unleash his inner Tom Jones to belt out “Song for Sabrina” makes you particularly glad that John Barry never got wind of a tune that would have made for a pretty good 007 theme if he’d had more than a share of shaken and stirred martinis.

Nicolas Carras is back in a wild mood for 1960s DATE BAIT, which makes for disc one of the switchblade jazz which comprises the double disc collection of “Juvenile Jive.” Here he scores a teen girl who falls in love with a pill-popping fiend who ends up dragging her to the wrong side of the tracks, hook, line and marriage. When his hopping ensemble isn’t going into a dope fiend swing, Carras scores “Date Bait” with all of screaming, small orchestral danger that accompanies so many of Monstrous’ earlier scores. It’s a nifty, hilariously cool combination of creature-worthy drama, growling brass and hip marijuana den grooves that makes you half expect the musicians ran into a rumble between the Jets and the Sharks, or at least Frank Drebin and The Police Squad, complete with a particularly funny quote of “Here Comes the Bride” and the doo wop song “Date Bait Baby.” Before he had Kirk and Spock battling to brassily percussive Pon Far, Gerald Fried prowled the hallways of 1958s HIGH SCHOOL BIG SHOT, which works just as well as adult crime jazz as a kid’s big-time plans to snatch a million go awry. Fried’s work scoring the show M SQUAD comes in very hand with the crisp, brass and piano heavy score, with the kind of piercingly rhythmic melody that paved the way to the big Vulcan rub out. Carras concludes the punk score triptych with the soundtrack for 1960s HIGH SCHOOL CAESAR, which has more empathy as a rich kid delinquent tries to fix the school election. Carras makes particularly good use of the bongos those reefer poets were playing back then, creating a neat crime does not pay combo, again given a catchy doo wop title tune. In any case, MMM’s showcase of “Juvenile Jive” stands as great crime jazz of any age, with Schechter as always providing beyond-detailed, and very funny liner notes for albums that come off as passion projects of the best kind, whether the scores accompanied the letters of A, B or Z.