On the eve of the two forthcoming concerts, the virtuoso talks his music and his rare violins 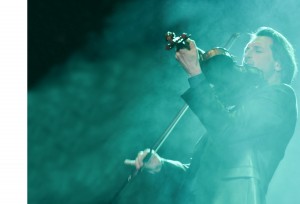 Emmy Award-winning Edvin Marton is a virtuoso violinist/composer whose musical style combines classical and rock.  Coming to Southern California between international appearances, Marton will be performing this coming weekend with his Prince of the Violin tour at the San Fernando Valley Performing Arts Center on Saturday, December 6, and in San Diego at the Contemporary Arts Museum in the Sherwood Auditorium on Sunday, December 7. He brings with him two rare, valuable violins, one an antique and one inlaid with 201 diamonds.

Speaking by phone, the Hungary-born Marton talks about his career and his musical style.

ASSIGNMENT X: Did you start out as a violinist and migrate into rock, or was it the other way around?

EDVIN MARTON: I started as a violinist, of course. First violin. I became a classical violinist. I started when I was five, in kindergarten. Basically, what happened is, I started to play violin because I fell in love with a girl in the kindergarten. And the fact was that she was not noticing me. I was asking my mom how could I impress her, so she suggested that I play for her a serenade on her birthday. I didn’t have an idea what a serenade was. I started to practice violin and she said that I should play for her on the violin. I played for her on her birthday a kids’ song called “Sun is Shining,” a Hungarian kids’ song, and I got a kiss from her. So it was a very incredible start.

AX: How did you wind up combining your violin work with rock music?

MARTON: I started to practice more and in three years, I completed seven years’ [worth of training]. I’ve been improvising from a very early age, because I learn very fast and it was boring for me to play the pieces that were assigned. In that way, I started to improvise my own melodies, my own music.

The rock thing came a bit later. I was studying at Juilliard School, and my roommate happened to be a deejay, and he got me into the club scene that I could attend, and because of him, I could feel that the world is not only about Mozart and Mendelssohn and Beethoven, but the modern world is about the modern pieces, it’s about the modern sound. That’s how I started to compose combining rock and classical sound.

AX: Are you originally Hungarian?

MARTON: I am Hungarian. My father is Hungarian, my mother is Ukranian.

AX: Did you originally come to the U.S. to go to Juilliard, or did you come earlier?

AX: How did you come to perform with your backup band?

MARTON: The band came in 2003. I was asked to make the music for the opening of the CHAMPIONS ON ICE show in Zurich, Switzerland. I needed to form the band, because that was the opening of the show on ice [for] ten thousand people. They asked me to compose a really thrilling opening, and it was their idea in Zurich if I could bring maybe girls as a band, because it could look better for the show. So I called a friend of mine who owned a modeling agency, because they said that the girls must look very nice, so I asked him if he had some girls who can play guitar. And he said, “Well, let’s see. Let’s do a casting.” So normally the girls would come for photo shoot casting, but this time, they came for band casting, and we chose a couple girls and they came to play for me. It was immediately a huge success at that show, and also I met the Olympic champion Evgeni Plushenko, the Russian Olympic champion of figure skating. He liked my music and started to skate to my music. That’s how he won his Olympics, skating to my music in 2006. The Olympic International Committee invited me to perform at that event, at the gala of Olympic Games, in Turin, Italy, which three hundred million people watched. That’s how people started to know my music and me.

AX: Do you still have the same band?

MARTON: No. Since then, I have worked with probably now than a hundred girls. It’s very important that they play really, really well. My band is now from the Musicians Institute of Los Angeles. They are really great players. My band is me as the violinist, a solo guitar, bass guitar and drums. And sometimes, when we have larger productions, I will have like a small chamber orchestra with sixteen people, with cello and violins on the side. But this is for bigger productions, for the markets where I’m better known, like China, Italy, Hungary, Germany, Russia.

AX: How would you describe your style of music?

MARTON: You know, it’s absolutely a blend of classical and folk rock. I play many things, from Mozart to Coldplay.

AX: When you perform, how much of the material is usually your original compositions and how much is covers/classics?

MARTON: It’s usually more or less fifty-fifty. Sometimes more original compositions, because I have compositions that I’ve got Emmy Awards for, like “Tosca Fantasy,” “Art on Ice,” and very successful now on YouTube “Fanatical” that I was filming at the Great Wall of China. Also, “Malibu Sunset” became very popular. So I would say half-half of the music. People like very much, of course, known melodies, but when I play my own music, they also appreciate that very much, because they can see that it’s my soul and what I am dreaming.

AX: How did you wind up with the one-of-a-kind Ex-Leopold Auer violin?

MARTON: There is a company called Violin Assets in Germany, and I have been awarded this Stradivarius 1699 Ex-Leopold Auer from that company. More than two hundred soloists and orchestras applied to win this violin to play, and at the end, they, together, with the owner, decided to award [the violin] to me for ten years.

AX: What is the musical advantage of this particular violin?

MARTON: The sound is so responsive. You can play at the same time a really great love song, but it’s reacting so fast that you can [also] play very virtuoso pieces, like Vivaldi’s “Storm,” like Paganini’s “Cappriccio,” and I am playing on every show this kind of very fast, very virtuoso composition.

AX: And you also have the diamond-inlaid violin …

MARTON: That’s a unique piece. because it’s for the first time in the history of the violin craftsmanship, I would say, Francesco Toto, who’s a master in Cremona, in Italy, that’s the city of Guarneri, of Amati, of Stradivari, just to name a few great masters of the seventeenth century, he invented this technique and was able to inlay two hundred and one Chopard diamonds.

AX: How did he prevent the diamonds from interfering with the quality of the sound?

MARTON: You know, the diamonds are inlaid in the purfling zone [described by Wikipedia as “a narrow decorative edge inlaid into the top and often back plate of a stringed instrument], So he invented this very strong inlay system, because if you really can inlay it strongly, it gives an even richer sound. The sound of the diamond violin is so incredible.

AX: You just came back from playing in Viet Nam. Do you perform a lot in Asia, and are the audiences different there than here?

MARTON: Yes, I do perform a lot in Asia. In fact, in just a couple weeks, I’m going for a ten-concert tour in ten different cities, [including] Beijing. China is incredible. You arrive to the city you’ve never heard of, they say, “Okay, this is Shenzhen. We have twenty-five million people living here.” It’s really funny. You visit a city you’ve never heard of and millions of people live there.

AX: Do most audiences respond in the same way, or are there differences in response depending on what country or what city you’re in?

MARTON: I would say the difference is, in a way, when you go more to the south, the audience is more loud.

MARTON: No. If we look to Europe, let’s say “north” is Ireland and Sweden and Great Britain, and then you go south to Spain, to Italy, to Greece, that’s the south. The people are louder. And also in China, there is a northern part and there is a southern part [with the same difference]. I don’t know why, but somehow – maybe it’s something with the weather. [laughs] Of course, every country is different. Every audience is different. But I’m really very lucky to get always a standing ovation in any country I go.

AX: Is there anything else you’d like to say about your music?

MARTON: Yes. It’s very fortunate that we have a huge amount of people who are doing fusion, combining classical and modern sound. That’s really great. For me, the most important thing is to take my audience to my musical planet, which is about emotion, combining love and virtuosity, just for them to forget everything, leave it behind and join me on this emotional trip for this evening, and to just enjoy this unforgettable sound of this Stradivarius violin. I think it’s the experience of a lifetime, to hear that sound.