Tales From The Crypt review Vault of Horror review DVD 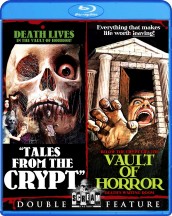 Before the 1990s HBO series, Amicus took a crack at the Crypt Keeper and those classic EC horror tales

Culling five stories apiece for each film, there’s a linking device for each that stays true to the EC origins. The result is lightweight if you compare them to the adaptations of the 1990s TV series, but that said, there are some creepy moments throughout both of them.

The set-up for CRYPT finds five strangers visiting a crypt only to discuss premonitions about their untimely deaths. Ralph Richardson plays the Crypt Keeper, who keeps these strangers on track and reveals what is all too apparent about their fates.

The best of the stories is “…And All Through the House” which is very stylized and creepy tale starring Joan Collins as a wife who kills her husband on Christmas Eve only to be terrorized by a mental patient dressed as Santa Claus who has escaped from a local mental institution. The build-up is superb and the suspense taut. The only complaint is that this segment could have been stretched just a little longer. The pay-off at the end is abrupt and not as satisfying as the rest of the tale.

“Reflection of Death” is too rushed, with a pay-off that works better in the comics. “Wish You Were Here” features a great little scare moment where a skeleton on a motorcycle chases a businessman (Richard Greene) on the verge of financial ruin.

Finally, “Blind Alleys” wraps things up with the longest segment starring Nigel Patrick is a military man who takes a new job of caring for the blind only to cut corners that makes their lives a living hell. Not surprising, the pay-back is quite devilish.

Perhaps the biggest problem with CRYPT is how short the stories ultimately are. Some don’t need much time to build but others, like “…And All Through The House” should have been expanded because the material definitely warrants it.

The production design is keen, especially the Crypt set. With the EC Comics so stylized themselves, the movies could have reflected that style even more so. George A. Romero’s CREEPSHOW is the closest film to capture the EC tone on film correctly – and it’s only inspired by those comics, not based on them. 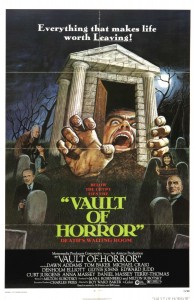 VAULT OF HORROR, directed by Roy Ward Baker feels more like THE TWILIGHT ZONE and NIGHT GALLERY with the stories feeling far more fleshed out despite having similar running times as CRYPT.

It’s a slightly better movie with a similar conceit – five strangers arrive at a hotel and find themselves discussing recurring nightmares about dying. Sadly, the Vault Keeper is not part of the group.

The stories include “Midnight Mass” about a brother (Daniel Massey) tracking down his sister (Anna Massey) as he discovers the town she lives in is populated by vampires.

“The Neat Job” is an excellent tale of a harried housewife (Glynis Johns) terrorized by her neat-freak husband (Terry-Thomas). When things aren’t neatly in place he freaks out, until she hit a breaking point. Some really nice set-pieces here, especially when Johns makes a mess and freaks out her husband is going to come home to find it.

“This Trick’ll Kill You” is a satisfactory story about a magician (Curd Jurgens) on a trip to India who finds an enchanted rope that has a life of its own.

“Bargain In Death” finds a man (Michael Craig) buried alive as part of an insurance scam with nasty results.

And the best of the lot is “Drawn and Quartered”, a story of a painter (Tom Baker) who gets a special gift in Haiti that allows his paintings to have a literal life of their own.

In this double feature Blu-ray set, the big bonus is finally getting to see the uncut version of VAULT OF HORROR. The film was truncated to get a PG rating in the United States, and is finally seeing the light of day in its original form. The missing pieces are more gore and a rather nasty pay-off in “Midnight Mass.” It’s amazing the film was butchered, considering the horror elements are pretty tame by most standards, but this is the crown jewel in the set that fans have been waiting for.

Shout! Factory also provides a dual Blu-ray disc with CRYPT and the uncut VAULT on Disc 1, but on a second disc, you get the original theatrical cut of VAULT as well as the full frame Open Matte Uncut Version of VAULT.

Special features are scarce, which is a peculiar for Shout!, though there is a fascinating full frame black and white trailer for VAULT OF HORROR that makes it look even cooler than the color version.

Fans of Amicus and the old EC Comics should add this set to their collection. Like all anthology film, some segments are better than others, but there’s enough goodness, originality and fright here to make it well worth the investment.

Go to Shout! Factory to Purchase TALES FROM THE CRYPT /VAULT OF HORROR double feature