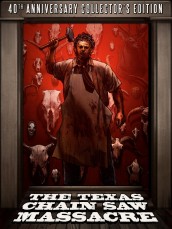 The 1974 original is back, remastered and as horrifying as ever

Time has been very good to 1974’s THE TEXAS CHAIN SAW MASSACRE. Not only has there been multiple, inferior sequels and remakes that have tried to supplant it with lesser results, but a whole new subgenre of horror movies was jump started due to this Tobe Hooper classic.

That subgenre of course is the “kids in a van” movie. So many movies have used this template to the point of nauseum – kids take a detour or go somewhere they shouldn’t go and bad things happen to them.

Like the slasher movies that were inspired by HALLOWEEN, there is something original and inviting about the gruesome origins of this subgenre and with the 40th ANNIVERSARY COLLECTOR’S EDITION released on Blu-ray, now is the time to revisit this masterpiece with fresh eyes.

While the film has been remastered in the past, this is probably the best the film has looked. In some ways, the grittiness of the film in previous incarnations and 1980s VHS neglect, gave the movie an aura of true, awful looking exploitation. In many ways these unintentional rough edges enhanced the film’s notoriety.

Yet, seeing the film pristine (or as pristine as a 16mm transfer can be) has really upgraded the look and feel. Tobe Hooper has had his ups and downs as a filmmaker over the years, but his skills are really on display here. He’s created a rich, spooky atmosphere beginning with the opening frames and concluding with Leatherface spinning around with his saw.

The other thing that stands out is the naturalism. Sound effects and sound design is used more to complement the film’s uneasy tone. And the first time Leatherface appears, is probably the most effective and frightening he has ever been in any film. What he does to the poor guy who comes into his home is without remorse or malice – it’s just matter-of-fact. Rewatch the scene again, it’s actually brilliant and wholly original. And the aftermath even shows Leatherface dealing with the closest thing he has to remorse (or fear for being a bad boy). You will never see anything quite like this.

The story follows a group of friends in a van who decide to take a detour on a Texas backroads to check out one of their (now abandoned) childhood homes. Too bad it’s right next door to a family of cannibals who also happen to make the best meat ever.

The story is rather simplistic and the “dinner” sequence has the kind of gallows’ humor that will make you want to not watch or laugh at its sheer grotesque lunacy.

While Hooper’s own official 1986 sequel THE TEXAS CHAINSAW MASSACRE 2 went for more comedy than scares, it’s a shame no one has ever quite got the franchise right except with this original film.

The new 40th Anniversary release is ripe with special features. Some archival features and some brand new. While there are deleted scenes and alternate takes from previous releases, there’s a brand new featurette showcasing even more unseen deleted scenes and outtakes (and most of it remastered). Tons of interviews and commentaries are also a major part of this package including three different commentaries including everyone from Tobe Hooper, Gunnar Hansen and Marilyn Burns.

Of the new featurettes John Dugan, who played Grandpa has a sit down as does editor J. Larry Carroll.

Trailers, radio spots and more round out this exceptional set.

One other nugget of trivia that comes from rewatching the film. The “Chain Saw” in the title is two words, not one as it became in later films.

THE TEXAS CHAIN SAW MASSACRE is far from a perfect film, but that’s frankly is why it’s endured. It’s a film that needed to feel dark, dirty and dank (something the 16mm enhanced taking it into faux documentary style at times), but what people forget is how much artistry went into Hooper’s breakthrough film. With so many film’s trying to emulate the look and feel of this over the years, it’s nice to finally have the ultimate presentation so people can see how this genre was done right.