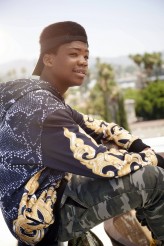 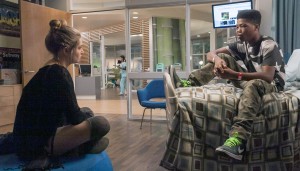 In Fox’s new Wednesday night drama RED BAND SOCIETY, the very different residents of the youth and children’s ward at a hospital wind up involved in each other’s lives. Octavia Spencer stars as Nurse Jackson, a take-no-prisoners type who still has a lot of sympathy for her young patients. Our narrator is Charlie (Griffin Gluck), a little boy who is in a coma, but nevertheless is aware of what’s going on around him and is able to communicate with some of the others.

One of the inhabitants of this hospital wing is Dash Hosney, played by Astro. It’s been a busy year for Astro (born Brian Bradley) – he’s costarred in two feature films, EARTH TO ECHO and A WALK AMONG THE TOMBSTONES. At a session that Fox holds for RED BAND SOCIETY and the Television Critics Association, Astro talks about playing Dash, who remains upbeat despite being hospitalized with cystic fibrosis.

ASTRO: I think he’s eventually one of the sickest kids in the series, but he’s also one of the most adventurous, being that his time is limited.

ASSIGNMENT X: Have you researched cystic fibrosis at all to play Dash?

ASTRO: I went to this hospital in – I believe it was Atlanta. I met with a kid with cystic fibrosis. He was my age, but he looked like he was about eight years old. What really impressed me about that kid was that he really enjoyed his life. He wasn’t depressed or sad or anything like that, he was just happy. He was a baseball fan and he had on this little jersey and he told me about PTS, a test that the kids with cystic fibrosis have to take, because the mucus clogs up your lungs, so I got to do a little bit more research.

AX: In the series’ pilot, we see this sort of romantic quadrangle forming between some of Dash’s friends, but he’s not a part of that. Is he going to get a romantic interest later on, or …?

ASTRO: I hope. I was supposed to have a kissing scene in the pilot, but [executive producer] Margaret [Nagle] took it out. That sucked, man. I was preparing for that scene, I was doing lip-ups. I won’t say with who, but they cut it out. I’m pretty sure later on in the series, I’ll have some sort of love interest.

AX: Well, you’re at least hitting on the nurse …

ASTRO: Exactly. That’s like my wife – she just doesn’t know it yet. I have a crush on her. I don’t want to give nothing away, but yeah, they have a pretty interesting relationship in the series.

AX: How in tune is Dash with what’s going on with Charlie? Does Charlie ever psychically reach out to Dash?

ASTRO: Maybe, maybe not. They’ve told me a little bit about stuff in the later episodes. I wouldn’t give that away, but I mean, maybe, maybe not. Charlie is the cool kid in the hospital – we all have a great amount of love for Charlie, so he’s our friend, either way.

AX: What’s the most physically challenging thing you’ve gotten to do as part of the show so far?

ASTRO: Physically challenging? I think just the coughing, because when you have cystic fibrosis, you have this wet, slimy cough. So I think that’s probably the most challenging thing physically. I haven’t really done anything else yet, but like I said, later on in the series, I’m pretty sure there will be action stuff. Margaret told me a little bit about the next few episodes, and there’s going to be some more serious moments with Dash, as opposed to him being playful all the time in the pilot.

AX: You play Liam Neeson’s young sidekick in A WALK AMONG THE TOMBSTONES. How was that?

ASTRO: It’s like a drama and an action mix. It’s very dark. Any movie Liam Neeson is in, there’s a lot going on. It’s directed by Scott Frank, we shot it in New York. It’s based in the late Nineties, so it was fun to kind of time-travel [in terms of playing scenes set in the past].

AX: Anything else you’d like to say about RED BAND SOCIETY right now?

ASTRO: I think it’s a great show, we have an amazing cast, everyone plays their role extremely well and I’m grateful to be a part of it.