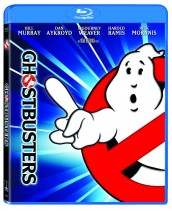 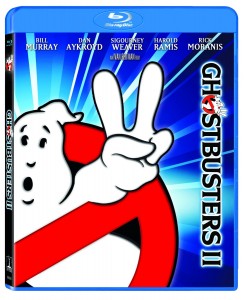 GHOSTBUSTERS is perhaps the greatest horror comedy ever. A great story, fantastic special effects, stellar imagination, sharp direction and a cast at the top of their comedic game, this 1984 classic stands tall. No one has ever been able to top it (not even the 1989 sequel) and no one likely will.

Now both films have been remastered in 4K and reissued on Blu-ray to honor the 30th Anniversary of the original film with a plethora of new special features.

GHOSTBUSTERS was the confluence of several different comedic aesthetics. On one-hand, you had the continuation of slob comedy perfected by the duo of Bill Murray and director Ivan Reitman on MEATBALLS and STRIPES (also with Harold Ramis). Then you have the quirky sensibilities of Dan Aykroyd who worked on the script with Ramis and a premise that could have worked as a straight horror movie or comedy. Mix, stir and everything locked into place into one satisfying whole.

The story focuses on loser New York professors Peter Venkman (Murray), Ray Stantz (Aykyrod) and Egon Spengler (Ramis) as they are forced out of college and into their own start-up business – busting actual supernatural phenomenon as “Ghostbusters”. This couldn’t happen as a better time as New York is experiencing a huge supernatural upheaval that conjures up supernatural incidences everywhere in the city.

Sigourney Weaver plays Dana Barrett who is one of the primary focuses of the supernatural attacks and also a budding love interest for Venkman.

As sharp and funny as it was back in 1984, GHOSTBUSTERS has aged quite well and with the great Ray Parker Jr. theme song, you don’t get better than this.

GHOSTBUSTERS II followed in 1989 and although it doesn’t hit the comic highs of the original, it still serves as a perfect companion piece to the original with a climax involving the Statue of Liberty coming to life.

New special features have been created for both discs. GHOSTBUSTERS feature retrospective documentary with Ivan Reitman and Dan Aykroyd, the Ray Parker Jr. music video (with surprise guest stars who weren’t in the movie like Chevy Chase and John Candy) and “alternate TV takes”. Special features from the original DVD special edition are ported over including a picture-in-picture mode, commentary, deleted scenes and more.

GHOSTBUSTERS II was skimpy on special features the first time around, but this time we get deleted scenes, a continuation of the retrospective from GHOSTBUSTERS as Reitman and Aykroyd discuss the sequel and the future of the franchise. The Bobby Brown music video “On Our Own” is also included.

While there’s been much energy expounded an re-starting the GHOSTBUSTERS franchise, once Ramis passed away, that became less likely the old guard would ever return to busting ghosts.

It is a hard nut to crack, and the recent thought of having an all-female ghostbusting team could go either way. Honestly, it’s dangerous to top what Reitman, Murray, Aykroyd and Ramis did – be it a new male team, a female team or a mix. GHOSTBUSTERS exists in a time and place and the key ingredient, frankly is Murray. And he’s been the lone hold-out which has prevented sequels from happening and you know something, he was right to hold out. Anyone remember BLUES BROTHERS 2000? At a certain point, it’s not worth tarnishing the past with something new just to make a few extra bucks. Many remakes in the last five years have proven that true.

Regardless, it’s nice that Sony Pictures has given these films a fresh coat of paint and remind us why we’re not afraid of no ghosts – as long as we have the ultimate comedy team of fighters taking them down.