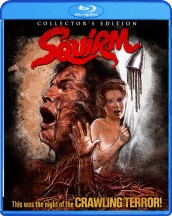 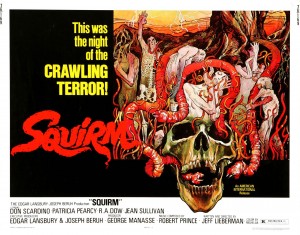 SQUIRM is a 1976 nature run amok film that sported excellent poster art that made it feel like a gloriously gory Italian giallo film, but proved to be something completely different – a Southern character study populated by bloodthirsty worms.

Shout! Factory has revisited the film with another excellent Blu-ray with a superb new transfer and solid special features.

Modern audiences may be a bit letdown with the pacing and cheats SQUIRM employs. After all, we’re in the era of computer generated excess, and a modern film would be filled with far more worms and worms that were more interactive than just merely being cutaways (which were the type eff FX available in 1976).

However, you have to accept the movie for what it was at its time, and amid some cheesy dialogue and some questionable character development, it still holds up as an icky, creepy crawly movie that gets under your skin. Old school techniques, some times are more effective than having every CGI trick in the book available.

The premise is rail thin, but it works – a big storm causes electricity to slam into the ground and transforms harmless worms into biting, hungry slugs in the small Georgia town of Fly Creek.

City slicker Mick (Don Scardino) visits his small town girl Geri (the appealing Patricia Pearcy) for a weekend visit when all hell breaks loose and the worms go on a rampage.

There are long stretches in the film where nothing happens, but the set-up and the sense of dread writer-director Jeff Lieberman conjures up on his small budget works. The clever use of practical, in-camera effects with the worms is also commendable, as well as some worm effects of going into people’s skin which were actually provided by a young make-up FX artist Rick Baker.

Where Lieberman fails at times, is with some of the wooden acting by some of the supporting players and the randomness by which the story develops. When Geri realizes there’s a problem with worms, she keeps it hidden from her mom for no apparent reason. There’s also some out of place comedy sprinkled throughout which minimizes the tension and scares.

In the making of, Lieberman and Scardino give the history of SQUIRM and what it took to get the film in the can. Originally it was written to be shot in New England to give it a Lovecraftian vibe, but the shooting schedule and weather forced them to choose Georgia, which changed the tone and characters a bit.

Lieberman also reveals that Kim Basinger was in the running for the lead role of Geri. You can see the regret in Lieberman for not hiring her, but Pearcy does just fine and her innocence has an infectious quality that makes you want to follow her journey throughout.

Other special features include Lieberman showing off his childhood house he lived in where the SQUIRM idea first originated, a theatrical trailer, TV and radio spots and a photo gallery. There is also audio commentary by Lieberman as well.

SQUIRM is a terribly underrated horror movie that makes up for lack of budget with clever filmmaking and insect villains that most people are already squeamish about to begin with. It’s nice to see this film restored with a brand new print and like many Shout! releases, finally getting the attention it so clearly deserves.

On a side note, Shout! is also releasing a MYSTERY SCIENCE THEATER 3000 box set called THE TURKEY DAY COLLECTION which features their skewering of a slightly more truncated version of SQUIRM. Might be a perfect double feature for this Thanksgiving.