One from the heart (and the lunatic asylum) 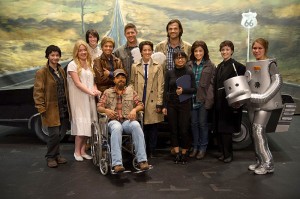 Jensen Ackles as Dean and Jared Padalecki as Sam surrounded by cast of Supernatural: The Musical! in SUPERNATURAL - Season 10 - "Fan Fiction" | ©2014 The CW/Diyah Pera

This reviewer is not often moved to tears, either of hilarity or emotion, nor does she often give out the grade of A. However, in the case of SUPERNATURAL’s two-hundredth episode, “Fan Fiction,” the first occurred and the second is warranted. Written by Robbie Thompson and directed by Phil Sgriccia, what could have easily gone off the rails at every turn is instead hysterically funny and eventually moving as it both moves the narrative forward and canonically embraces the show’s fans.

Say what? How exactly can a show that’s nominally a drama, no matter how supernatural and sometimes insane, write an acknowledgement of its fans into the onscreen action, let alone without insulting either said fans or the show itself? Back in 2009, SUPERNATURAL introduced the character of novelist Chuck Shirley (Rob Benedict), nomme de plume Carver Edlund, who was writing SUPERNATURAL as a series of novels – he knew what was happening because he was a Prophet of the Lord. Dean (Jensen Ackles) and Sam (Jared Padalecki) were appalled to discover his existence – and were even more taken aback when they found Shirley’s books had a fan following. This is how SUPERNATURAL has until now addressed with the whole concept of fandom, sometimes with grace and sometimes with, um, less.

However, in “Fan Fiction,” we’re introduced to a new author, Marie (Katie Sarife), a student at an all-girls high school, who is mounting a campus production of her own homage to Edlund’s works, “Supernatural: The Musical.” Dean, desperate to be back out on the road, reads of the disappearance of the school’s drama teacher and convinces Sam they ought to investigate, unaware of what else is happening until they arrive. The expressions that Ackles and Padalecki generate when their characters walk in on a rehearsal are, as the saying goes, priceless.

When they get over their initial shock, Sam is a little bit charmed and Dean is plenty horrified. There is nothing for it, though, but to enlist the students in finding out what’s happening. It turns out that the muse Calliope (Hannah Levien) tends to protect an author’s vision by protecting the work until it is completed (the drama teacher was about to shut the production down) – and then eating the author. This is enough to make Marie want to not put on the show, but Calliope will never be caught – and her victims never rescued – if the muse can’t be made to show herself. So the show must go on.

Calliope kidnaps Sam, but he, the drama teacher and another student band together to stab the muse at the same time that Dean and Marie are battling it out with Calliope’s scarecrow minion on stage in the middle of a musical number.

By now, a number of things have happened, including several musical numbers, a reference to Marie’s one-woman show version of ORPHAN BLACK and Dean’s realization that his relationship with Sam is what is so enormously powerful to these kids, no matter how they express it or how they view it. By the time the curtain is supposed to go up and Marie and some others are afraid of Calliope, Dean is sufficiently motivated to give the following speech: “You’re all here because you love SUPERNATURAL … I know I have expressed some differences of opinion regarding this particular version of SUPERNATURAL, but tonight it’s all about Marie’s vision. So I want you to get out thee, and I want you to stand as close as she wants you to, and I want you to put as much sub in that text as you possibly can.” Then he quotes a few lines from RENT.

Calliope and the evil scarecrow are dispatched by the 47-minute mark, which leaves another whole act to go. So what can happen? Well, we see some more of the musical, which includes Sam and Dean watching as the all-girl cast sings a radiant soprano cover of Kansas’ “Carry On, Wayward Son.” Dean tells Marie, “I have my version and you have yours” when it comes to SUPERNATURAL. Marie finally realizes/admits that Dean is indeed the Dean. Back in the car, although this goes unspoken, we can see that Sam and Dean’s bond has been greatly repaired/strengthened by seeing it through the eyes of others.

And by now, we’ve had the ballad “A Single Man Tear” that is both genuinely amusing and affecting enough to stop Dean in his tracks as he hears it; we’ve had the song “I’ll Just Wait Here” from the musical’s version of Castiel, we’ve had a teenaged girl dressed as Bobby proclaiming people to be “idjits.” We’ve been given Marie’s reaction to Dean’s earnest recounting of what’s happened between Season 6 through now as, “That is some of the worst fan fiction that I have ever heard.” We’ve heard Sam wondering why Dastiel isn’t Destiel or Casdean. We’ve seen a really bad prop scarecrow. We’ve had Sam and Dean honestly sobered by mention of their half-brother Adam, represented in Marie’s musical, but left in Hell since the end of Season 5 with nary a word of him in an episode until now.

So how to possibly end all this? After the show, Marie learns that someone claimed the ticket she left for the publisher. And it’s – she goes weak in the knees – Carver Edlund, aka the Prophet Chuck, who is her literary idol and who has been MIA from our SUPERNATURAL since the end of Season 5. He pronounces “Supernatural: The Musical” not too bad.

The reappearance of Carver/Chuck of course raises the question of where the hell/heaven/purgatory he’s been for the past five seasons, which will probably be revealed in due course.

Meanwhile, for those who know the ins and outs of fandom, the precision of “Fan Fiction” is a joy to behold. For those who don’t, it’s still a joyous expression of love of what SUPERNATURAL is, what it can do and of those who it moves. Meta has seldom been more embracing, and almost never so entertaining. Not too bad, indeed.