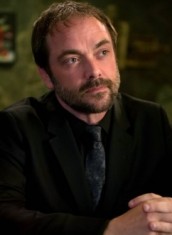 © 2014 The CW
Mark A. Sheppard as Crowley on SUPERNATURAL Reichenbach
Reviews 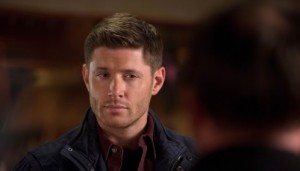 Jensen Ackles as Dean on SUPERNATURAL "Reichenbach" | © 2014 The CW

Well, gosh, SUPERNATURAL does FARGO. Not for the entirety of the “Reichenbach” episode, but the tip of the hat to FX’s miniseries is sizable, down to naming a supporting character with a thick Midwest accent Lester. Even the title “Reichenbach” is a kind of homage, since the action in FARGO never goes to Fargo and the action in Reichenbach doesn’t make it to the Falls, either.

Although demonized Dean (Jensen Ackles) has told Cole (Travis Aaron Wade) that he doesn’t care if Cole kills his captive Sam (Jared Padalecki), that’s not what happens. Cole isn’t a cold-blooded killer, he’s just out to avenge his father’s death in 2003 at Dean’s hands. (We still don’t know why this happened.) Sam escapes – possibly or possibly not because Cole lets him – and Cole simply follows Sam to Dean.

Meanwhile, Crowley (Mark A. Sheppard) knows that Dean’s Mark of Cain demands blood. Crowley also assumes that Dean is now working for him, so he gives Dean a job intended to service both Hell and the Mark – kill the unfaithful wife of Lester (a terrific David Nykl), a jerk who has sold his soul in order to avoid having to lose half his assets in a divorce. Lester is fool enough to show up on site to make sure the killing is carried out, and Dean winds up killing Lester instead of the wife, who can’t really be blamed for cheating on this loser. Crowley is appalled – he didn’t hold up his end of the bargain and now can’t claim Lester’s soul.

Sam shows up, with Cole right on his tail. The result is that Dean beats the crap out of Cole but doesn’t kill him. Dean later explains to Sam that this wasn’t mercy – Cole will now have to live every day with the knowledge that he wasn’t good enough to kill the man he’d been chasing for over a decade. Sam manages to get the Blade away from Dean and gives it to Crowley, who professes to be happy that Dean is leaving. However, when he thinks no one is watching, Crowley stars at a cell phone photo of himself and Dean in happier times.

In the Castiel (Misha Collins) storyline, Hannah (Erica Carroll) discovers that a little of ailing Castiel’s grace still remains and that the jailed Metatron (Curtis Armstrong) knows where it is. Metatron says he’ll give Hannah the grace to give to Castiel. All Hannah has to do is free Metatron, who promises he’ll leave the planet. Hannah might actually agree to this, but Castiel shows up and says he’d rather die from lack of grace than let Metatron out. Metatron howls that he’ll get out one day, and when he does, “Everybody dies!”

Given the way SUPERNATURAL works, Metatron will probably be out one way or another before anyone expects. For now, Sam still has the problem of Dean being a demon and Dean not wanting to be saved, though they and we have been down versions of this road before. Ackles certainly seems to be having a good time with Dean’s demonic state, which seems at once constantly angry and constantly happy.

Sheppard is so good that we do momentarily feel bad for Crowley in his abandonment, though his King of Hell-ness mitigates against too much sympathy. We really do feel for Cole, who has no notion what he’s up against (when Sam tries to explain about monsters, Cole thinks he’s insane). Wade gives the character great decency, rage and a sense of shame, and the writing allows him some grace notes with his family to fill him out. Armstrong remains splendidly smarmy as Metatron, and he seems truly dangerous in that fit of pique.

The highlight of the episode, though, is the scene in the car with Lester trying to justify his position and Dean growing more incredulous by the second. It’s as if SUPERNATURAL filmed some inspired crossover fan fiction – it’s funny and bizarre and fits perfectly.