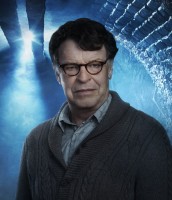 The actor talks his character's parent issues, plus FRINGE's Walter 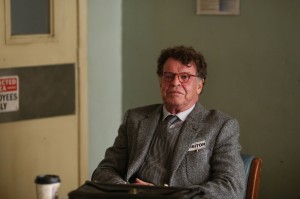 In Fox’s SLEEPY HOLLOW, now in its second season Mondays at 9 PM, John Noble plays a character who has changed considerably in our perceptions. We first met his Henry Parish last season. Henry introduced himself as a psychically sensitive “sin eater” who apparently wanted to help Ichabod Crane (Tom Mison) and police lieutenant Abbie Mills (Nicole Beharie) in their efforts to prevent the Apocalypse. Imagine their surprise when “Henry” turned out to be not only Jeremy, the presumed-dead son of Ichabod and Katrina (Katia Winter) – who now appears older than his parents – but also the Horseman of War.

The Australian-born Noble, who previously spent five seasons as eccentric, brilliant, iconic Dr. Walter Bishop on Fox’s FRINGE – which, like SLEEPY HOLLOW, was co-created and executive-produced by Alex Kurtman and Roberto Orci – is at a Q&A session Fox holds for the Television Critics Association at the Beverly Hilton Hotel. When the panel ends, he remains available for further discussion.

AX: You joined SLEEPY HOLLOW in what was a recurring role last season and you’re now a series regular. Did you know that was the plan when you signed on?

JOHN NOBLE: It was discussed with me at that time. I came on for a few guests [appearances] with a view of coming back this year.

AX: What is Henry/Jeremy’s relationship with Abraham Van Brunt, played by Neil Jackson, who is the Horseman of Death?

NOBLE: I don’t think he likes him very much.

AX: Because Abraham has taken Henry’s mother, even though she’d rather be with Ichabod?

NOBLE: Not only that – he’s another soldier; they’re always jealous of each other. There’s no affection there. Why would there be? There’s nothing to make them affectionate toward each other.

AX: Do you know if we’ll be seeing the other two Horsemen?

NOBLE: I don’t know, but I’ll be very surprised if we didn’t sometime.

AX: Well, there are supposed to be Four Horsemen of the Apocalypse total, so …

NOBLE: Yes, I know. I haven’t heard when those two will be – or indeed, who they’ll be a manifestation of, because they way it’s happened so far, we know the people beforehand. So we look around and say, “Hmm, I wonder who the next Horseman will be? Could it be Tom?”

AX: Henry is one of the Horsemen, but do we ever see you on a horse?

NOBLE: No. No, you won’t. You’ll see the Horseman on a horse, but I have a special trick where I don’t have to be inside of the thing. I just animate it and I sit back. It’s much better this way, because what you can see is Henry’s mind manipulating Henry’s Horseman.

AX: We saw that Jeremy had created a golem as a child. So his Horseman is like another golem?

NOBLE: If you will, I suppose. But what he has the ability to do is to animate, for example, the armor. He can animate that and occupy it with his spirit, but he doesn’t actually have to be inside of it. So we never see who’s inside of it.

AX: Henry/Jeremy is really angry at both his parents, who are still alive – and look younger than him. Did you imagine at this point in your career you’d be playing somebody who was still acting on parental issues?

NOBLE: Well, probably, because we all do. No, I know, and my father is so well-preserved, too. I hate him. [indicates Mison, who is in the vicinity] Look at him – he looks thirty. No, it’s fun playing backwards, because I think we never lose our parent issues. As long as we live, we still try to please them; they might have been dead thirty years.

AX: And are you continuing your work with the Science Channel? You did DARK MATTERS: TWISTED BUT TRUE for them …

NOBLE: Not that one, no. That one unfortunately went away. I still have a very good relationship with them. There’s talk of another one. Not that one, though.

AX: Do you miss Walter at all?

AX: Does Henry in his machinations ever make you laugh?

NOBLE: Yeah, because – I mean, I love the game he played the first season. He was having the time of his life, because he knew all the time exactly what he was saying while playing this silly old fellow. So I loved all that. This time, he’s just a very hard, cold man – up to this point. But that will change.

NOBLE: Never. He doesn’t have to. We always hear what we want to hear. You know that, don’t you? So, no, he doesn’t lie – he just says things and people just assume. We do this all the time! It’s one of the great mysteries of communication.

AX: How much do the different directors on SLEEPY HOLLOW – or any series where you’re a regular – affect you? Because obviously, on the one hand, you spend more time with the character, and on the other hand, the whole show is a little bit new, so how much …?

NOBLE: Very little. Generally, I find that the directors have got a huge job to do. They walk into an already-established show, an already-established company, and then within a certain period of time, they’ve got to bump out that amount of footage. So I take the attitude that I respect them all enormously for doing the job and help them as much as possible, and that is the way I’ve always worked. So I guess I try to make it as easy as possible for them. It’s a terribly hard job. I’ve been a stage director for many years – I wouldn’t have this job [of directing SLEEPY HOLLOW episodes] for anything. It’s so hard.

AX: Some of the SLEEPY HOLLOW sets and your North Carolina location look a little challenging sometimes, because you’re in a very tangly wood. Do you ever have any problems maneuvering through without, say, catching your feet or getting hit in the head with a branch?

NOBLE: A little bit, but what they also have problems with is ticks and mosquitoes. It can be a real issue. Because it’s in the South. The mosquitoes are everywhere, but ticks are the big thing. And so we have people picking ticks off themselves. And one girl got bitten by a black widow spider.

AX: Yikes. Do you have any other projects going on that we should know about? IMDB says you’re in an Australian miniseries called THE DEVIL’S PLAYGROUND and you’re in the feature film THE MULE.

NOBLE: I’ve got voice stuff that I’m doing, but I’ve nothing else to announce at this stage.

AX: Is there anything else you’d like to say about SLEEPY HOLLOW?

NOBLE: The main thing – I think it was hinted to [during the Q&A panel] – when they referred to social media and they referred to the importance of it. I think that on FRINGE, we were the first to find that out, just how it’s a maker or breaker. Because without question, I think social media kept FRINGE going beyond the second season. That’s the importance of it, and not to be underestimated at any time. Because it gives everyone a say. You have an investment. I’m just a watcher sitting somewhere in Minnesota, but I can have my opinion and be responded to, so I’m invested in the show. That’s really amazing.

AX: Are there shows that you like to respond to?